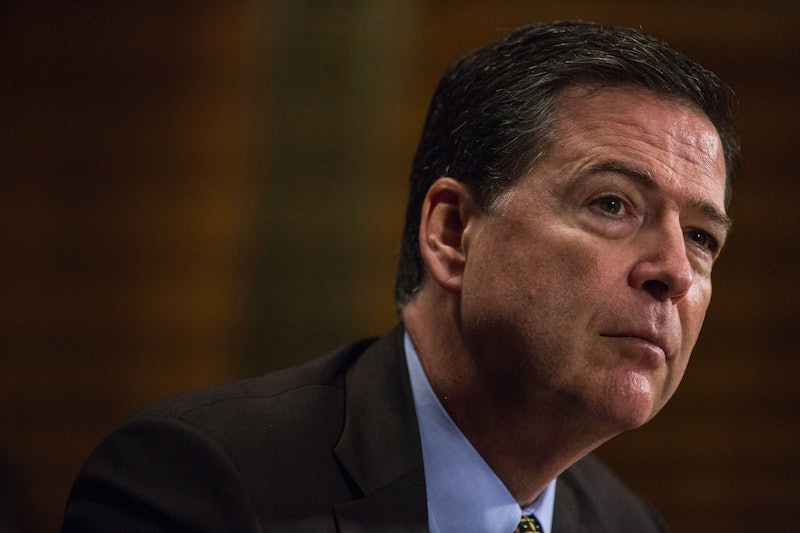 Another round of potentially explosive congressional testimony could be right around the corner. According to NBC News, former FBI director James Comey will testify before the Senate Intelligence Committee as early as next week.

The exact date hasn't been scheduled just yet, but multiple major news outlets have reported that it'll take place sometime next week, having been given the green light from independent counsel Robert Mueller. According to CNN, sources close to Comey suggest that his testimony could reveal that Trump tried to pressure him to end the FBI's investigation of his campaign's ties to Russia, thus implicating that his firing was an attempt to halt the investigatory process.

Trump, for his part, has acknowledged he had the Trump-Russia investigation on his mind when he pulled the trigger on Comey's firing, as he admitted to NBC's Lester Holt in a nationally televised interview mere days after doing so. He also reportedly told two top-level Russian officials, Ambassador Sergei Kislyak and Foreign Minister Sergey Lavrov, that firing Comey had taken some pressure off of him.

Trump's statements, both reported and on camera, lead one to fairly conclude that Trump's decision to fire Comey involved the investigation of his own campaign.

Any direct testimony from Comey echoing the idea that the firing was an act of obstruction could potentially be a bombshell development in the case. Here's what Trump told Holt on Friday, May 12, just three days after he abruptly and unceremoniously fired Comey:

In fact, when I decided to do it, I said to myself, I said "you know, this Russia thing with Trump and Russia is a made-up story, it's an excuse, by the Democrats, for having lost an election they should have won."

Of course, it's impossible to say whether these sources are correct, or what Comey's testimony will actually be about. Reports following his firing have suggested that Comey wrote memos after his meetings with Trump, detailing the president's request for an oath of loyalty and for the investigation of former national security adviser Mike Flynn to be ended.

While you can't plan the exact time and date to watch the testimony just yet, you can rest easy. Whenever it happens, it will surely air on C-SPAN, cable news channels like MSNBC and CNN, and be available for streaming online. You shouldn't have much trouble finding the specific information once the testimony is scheduled, either ― on anticipation alone, it's going to be one of the biggest political events in recent memory, so expect everybody and their grandmothers to be talking about it.