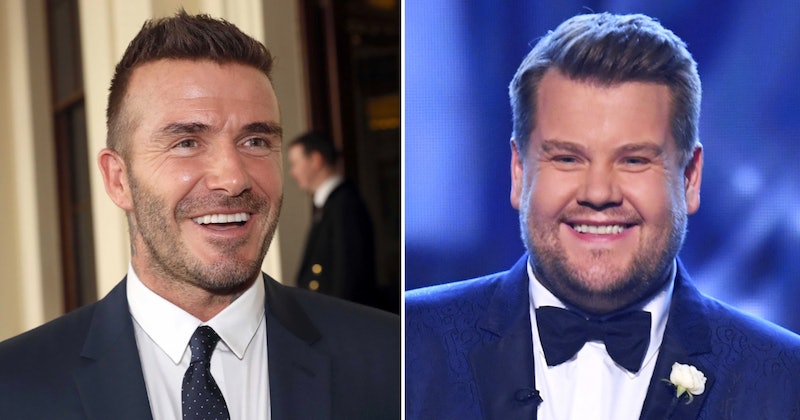 David Beckham has undoubtedly become a legend not only as a footballer, but also as a model, sports personality, and one half of Posh and Becks. Being the stuff of legends means leaving a legacy. And what do people with legacies often have made in their honour? Why statues of course. And that's exactly what the former footballer thought he was getting: a beautiful statue. Little did he knows that his mate (and legend in his own right) James Corden was about to throw a spanner in the works. Yes, James Corden played a hilarious prank on David Beckham and it's so funny that you had better be somewhere with soft carpet, cause you're about to be ROFLing.

So, like I said before, this prank all started out with Beckham thinking he was going to get one of the biggest honours in his life: having a statue made of him in celebration of his wildly successful career. In particular, his six seasons playing at U.S. team LA Galaxy. The statue, which was to be unveiled at the kick off of LA Galaxy's 24th season, was a long time in the making, and Beckham even met with the sculpture before the unveiling to keep an eye on the work. However, Corden had other plans for the statue. Plans that started months before the actual prank.

Corden's idea was to swap out the original statue for a copy that had a few distinct changes to it. Changes that were described as a "little less flattering", perhaps taking some inspiration from that Ronaldo bust.

Like all great pranks, this one took a very long time to prepare.

Two months ahead of the unveiling, Corden decided to get to making the replica. Key to the plan was not only the knowledge that Beckham hadn't seen the finished statue, but also that he had made two important notes the last time he viewed it. His notes were that "the chin and butt was too big". So, in some excellent comedic prowess, Corden decided to get his props department to make the replica with a considerably larger bum and chin.

The plan was that Beckham would be turning up for a sneak preview in a loading dock behind the stadium ahead of the public unveiling of his statue. Not only was the space in question rigged to the nines with hidden cameras, but there was a camera crew with him, who were pretending to be a part of the LA Galaxy behind the scenes crew. Speaking to the phoney crew, Beckham's pride and excitement was clear:

"It's a special moment that I'll be able to share with friends and family," he said.

OMG, the build up right? And the cherry on the top of this prank is the fans, production team, and sculptor on site were all played by actors. Actors whose one and only job was to annoy him. One particular actor went straight in, referring to Beckham's career at Manchester United as being at Man City and repeatedly calling him Dave. A name Beckham seemingly hates being called, which he flagged by saying: "My mum's the only person who calls me Dave."

The president of the club, who is not only a former teammate of Beckham, but also a trusted friend, is in on the whole joke, and is on hand to show a career highlights video that will be shown before the statue is unveiled. Corden's team slipped a few "lowlights" in as well, including missed goals, penalty kicks, and even a time when Beckham got a red card.

For the unveiling, comedian Maz Jobrani (who was imitating the real sculptor Omri Amrany) took the floor to say what an honour it was and to build up the excitement before pulling off the cover for the big reveal. When it is unveiled, Beckham's face falls and he says to Jobrani: "This is different than what it was when I last saw it in Chicago".

Asking to have the cameras turned off, the hidden cameras catch Beckham's worries about the statue, referring to his kids potentially crying if they saw it. And when a forklift driver not-so-accidentally knocks it over he says: "You've probably done me a favour." This is when Corden comes out and reveals the prank and everyone (including Beckham) is left howling with laughter.

And, by the looks of things, not only was Beckham pretty relieved it was a prank, but he ended up liking the *actual* final product too.