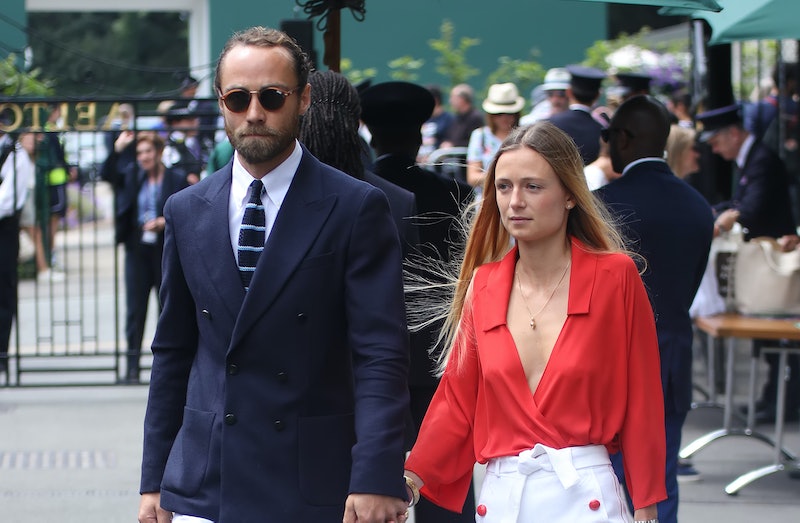 James Middleton may be the brother of one of the most famous women in the UK, but he’s also developed quite the name for himself, having built a firm following who admire his honesty, his refreshing approach to mental health, and his love of dogs. And now there's an update to get excited about: James Middleton just got engaged. Middleton's fiancé Alizee Thevenet works in the finance sector and they look like a match made in heaven, having met in the sweetest way.

On Sept. 6 Middleton took to his Instagram to reveal that he had proposed to his girlfriend, financial analyst Alizee Thevenet, in the Lake District and she said yes.

Under a picture of the pair beaming to the camera, he wrote: “She said OUI. Our secret is out but we couldn’t be happier to share the news.”

In the picture, Thevenet is sporting a gorgeous engagement ring, which the Daily Mail reports is a sapphire.

"Oui" is a nod to his bride-to-be's nationality, as Thevenet is from France. According to Tatler, she can also speak Spanish alongside English and French and, while was growing up, she lived in six different countries⁠: France, Germany, Indonesia, Chile, Belgium, and England.

Thevenet has been in the financial industry for about six years. Tatler reports. Having gained a Masters degree from Queen Mary University London in Investment and Finance, she’s now a financial analyst.

As reported by the Telegraph, Thevenet and Middleton met at the South Kensington Club, a private members club in the heart of London. According to the newspaper, Middleton's "Cocker Spaniel, Ella, bounded up to her and they began talking." Oh my gosh, talk about meet cute. Bustle has reached out to a representative at Middelton's company Boomf to see whether they have any comment on this report, and I'll let you know if or when I hear something.

In an instagram story on Middleton’s account, which shows the pair swimming in the sea and kissing he wrote, “I asked @alizeethevenet a question the other day…” This was followed by an adorable montage of the pair's time together and then a photo on his grid to confirm that they’d be getting married.

It would seem that Middleton doesn’t just have his fiancé onside but her entire family. Speaking to the Daily Mail in Jan. 2019 about their relationship, Thevenet’s dad, Jean-Gabriel Thevenet said, “James is a very charming man. I am very happy that Alizee is together with James. I know she is very happy. We keep our fingers crossed for them... James and the Middleton family are very charming. We have a lot of admiration for the whole Middleton family — James, his sisters and his parents."

The couple have kept their relationship fairly private and low key and, since they announced their engagement less than 24 hours ago, it’s safe to say they haven’t shared any of their wedding plans just yet. But, with their obvious shared love of the outdoors, dogs, and one another, it would seem they’re a match made in heaven.