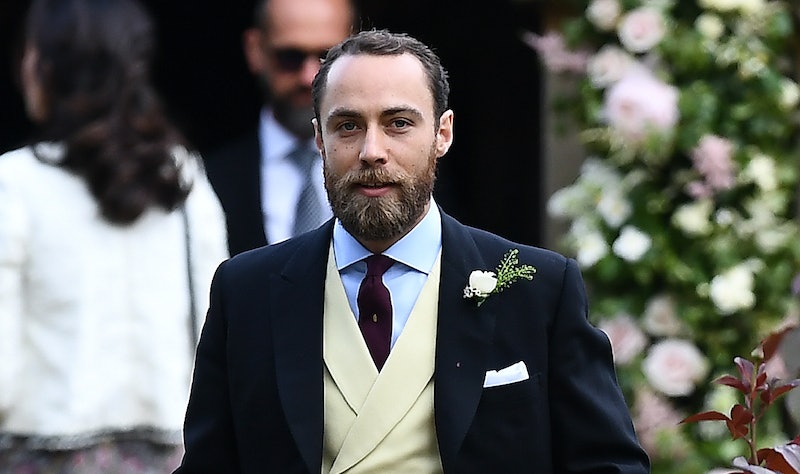 When you're diagnosed with depression, it feels like the world caves in on itself and you're the only person left. In reality, millions of people across the country are in the same boat, including some well-known faces. For instance, James Middleton recently opened up about his mental health for such a very important reason, reassuring those that suffer with the condition are not alone.

In an article written by Middleton for The Daily Mail, the businessman dug deep into the psychological effects that depression, attention deficit disorder (ADD), anxiety, and dyslexia had on his mind and body. Feeling a "new sense of purpose and a zest for life," Middleton decided to speak out about his mental health in support of Heads Together, a charity founded by his sister Kate Middleton, brother-in-law Prince William, and Prince Harry.

"They believe we can only tackle the stigmas associated with mental illness if we have the courage to change the national conversation, to expel its negative associations," he wrote. "I want to speak out, and they are my motivation for doing so."

But when exactly did he know something was wrong? According to the article, from an early age Middleton knew his brain was wired differently, but didn't realise the extent until he became an adult, as mental disorders affect everyone differently. As a result, the signs and signals can be hard to recognise. For Middleton, depression caused insomnia, anxiety, and inertia which in turn led him to sink "progressively deeper into a morass of despair."

It got to the point where he couldn't respond to messages, leaving him unable to open emails or answer worried texts from his family without immense feelings of anxiety. As someone who has been diagnosed with mild depression and generalised anxiety disorder, I know that these bouts of anxiety often appear without any justified reason. For me, notifications popping up on my phone can often lead to a minor anxiety attack for no apparent reason.

Add to that the days where depression and anxiety take hold and I just succumb to a catatonic state, it's hard to fully realise what you're actually dealing with. Middleton sums this up perfectly in his article when he writes, "It's not a feeling but an absence of feelings. You exist without purpose or direction. It is not merely sadness. It is an illness, a cancer of the mind."

That's not to say it's incurable, as Middleton began to realise. He packed his bags — and his dogs — into his car, and drove to a remote part of the Lake District to try and sort himself out. It was there that he began to realise he wasn't okay. "I knew if I accepted help there would be hope," he wrote. "It was a tiny spark of light in the darkness."

After being diagnosed with depression and attention deficit disorder (ADD), all the pieces began to fall into place. He began weekly visits with his GP, and also started cognitive behavioural therapy (CBT) to "change the patterns and thoughts of [his] behaviour." While he didn't feel he was ready to personally speak about his mental illness with his family, he asked his GP if they could tell them, as "those who are the closest to you are the hardest to speak to." But now they are on the same page, both he and his family are doing all they can to understand how these disorders work and effect the mind.

He also has his five pups, which have been his main source of emotional support. As a result of discovering how one of his dogs (Ella) responded to his emotions during his recovery, he and Ella now volunteer for Pets As Therapy, a charity that provides therapeutic visits for those in need. Ella herself is now a qualified therapy dog for PAT.

Middleton has begun to find the support and help he needs to combat depression, and he wants others to feel safe in the knowledge that they can too. "If I could leave you with just one thought, it would be 'It's OK not to be OK,'" he wrote. "This is the mantra that gave me the strength to speak out. Having done so here, it feels as if a great weight has been lifted."