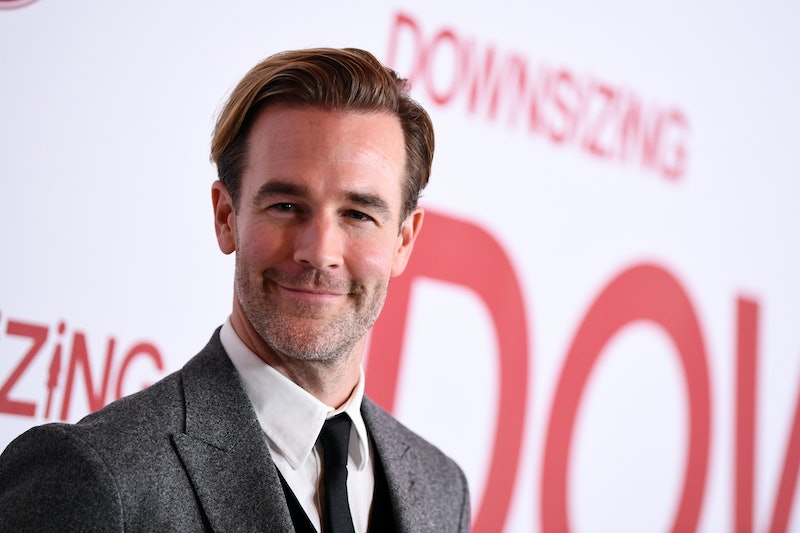 Somehow, it's been 20 years since Dawson's Creek premiered. Yes, you're reading that correctly: Two full decades have passed since Paula Cole's theme song played viewers into one of the most iconic teen TV shows of all time. Entertainment Weekly gathered the cast together to celebrate the Dawson's Creek reunion, and once you see how James Van Der Beek reacts to the Dawson crying meme, you'll love him even more. You'll love the show even more. And, though you didn't think it was possible, you'll love the Dawson crying meme even more.

Footage of Van Der Beek crying on Dawson's Creek has been a meme for a long, long time. It's the rare meme that's made the jump from still to GIF, and it's perfect in every way. Van Der Beek talked to EW about the long-running meme, how it feels to have that moment immortalized on the Internet, and you can stop holding your breath now, because he loves it.

“I love it. It’s my favorite thing about the whole show. It’s hilarious to me that you can work for six years on a show…and it gets boiled down to three seconds. It’s a perfect way-of-the-internet. I feel like everybody on this show cried more than I did and I was the one who got caught in the loop!”

Of course, that's not all there is to the story.

Buzzfeed points out that this is not the first time Van Der Beek has addressed the Dawson crying meme. Back in 2012, the Huffington Post asked him about it, and he revealed what is perhaps the greatest meme fact of all time: The scene with Dawson crying wasn't even in the script. It just kind of happened. One might not think of Dawson's Creek as a set that featured a ton of improvisation, but without it, "Teary Leary" might not have ever happened. Explained Van Der Beek at the time:

"It wasn’t scripted, I don’t think. I mean, it was appropriate for the scene. You know, it was just high drama; you’ve been living with this character for a while and a scene like that just kind of drops in your lap and you just lose it. They yell cut and say, 'Oh my god. That was amazing!' So I remember being completely surprised by it because it was completely sincere. The fact that it’s being used to mock me now, I think it’s so funny."

The fact that it was a genuine cry-face he improvised on the spot makes this all even better. It wasn't some corny, why-is-he-doing-this moment. Van Der Beek took the creative liberty, after years of playing Dawson, and let it rip. Just like that, a future meme was born. As he said, it's extremely Internet to take six years of a heart-wrenching, iconic series and boil it down to a repeating clip of his incredible, ridiculous, impossibly sad crying face. But hey, that's just what the Internet does.

Since his time on Dawson's Creek, Van Der Beek hasn't exactly had an opportunity to resurrect the cry face on-screen, but you never know what the future may hold. He starred as himself on Don't Trust The B---- In Apartment 23, CSI: Cyber, Friends With Better Lives, Downsizing, What Would Diplo Do? among other film and TV projects. He'll next star in Ryan Murphy's new FX series Pose, which will premiere later this year.

It should be on Netflix, still, so definitely check that out. But the fact that it's been 20 years since Dawson's Creek first premiered, though? Insert the Van Der Beek cry here.

More like this
The 'Kenan & Kel' Reunion On 'SNL' Took A Dramatic Turn, Thanks To Keke Palmer
By Brad Witter
The First Trailer For 'That '90s Show' Includes So Many Nods To The Original Series
By Jack Irvin, Alyssa Lapid and Grace Wehniainen
Kim Cattrall Had A 'Sex And The City' Reunion With Creator Darren Star
By Grace Wehniainen
17 Photos Of The 'Wednesday' Cast Vs. The 1991 'Addams Family' Cast
By Grace Wehniainen
Get Even More From Bustle — Sign Up For The Newsletter