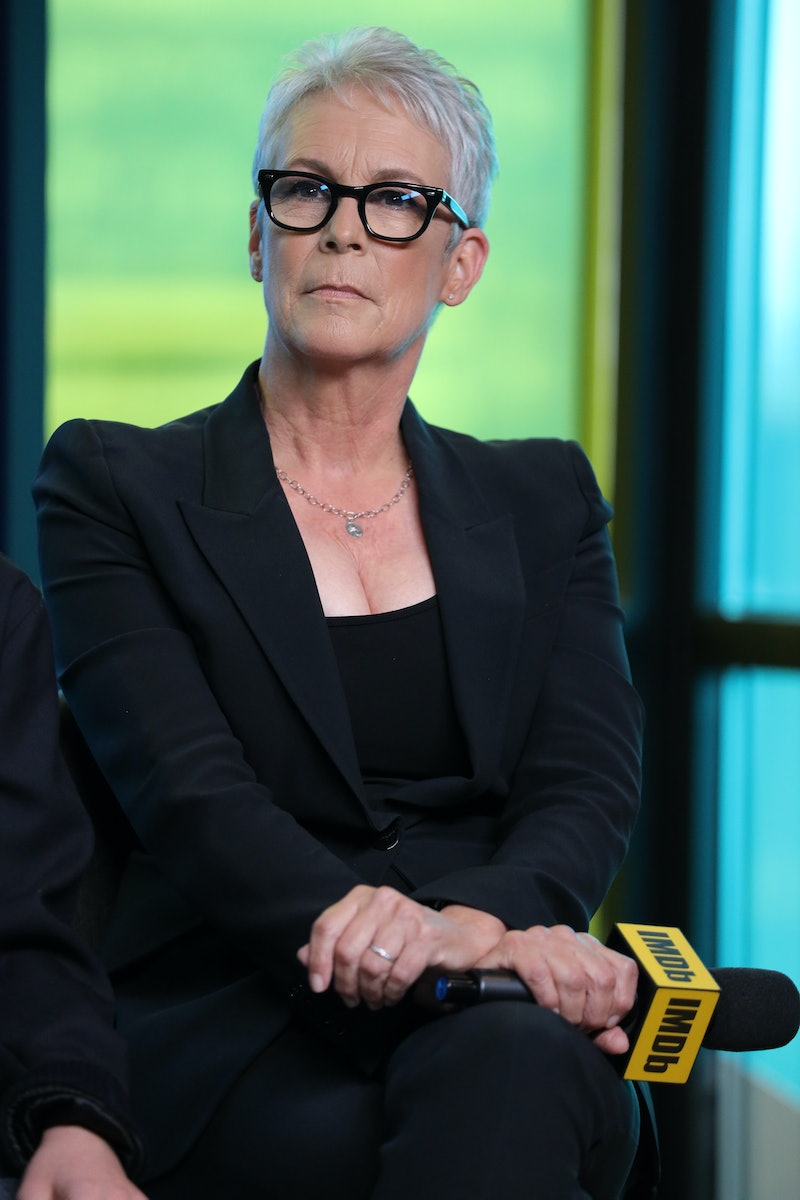 Although the next Halloween movie won't be released until October 2020, Jamie Lee Curtis did share a photo from the Halloween Kills set via tweet on Oct. 8. Along with the photo, the actor wrote, "NEVER SAY DIE! First day back in the battle for my life!" She is reprising her role as Laurie Rode from the iconic movie Halloween, which the actor announced on Instagram on July 19.

The Hollywood Reporter reported that Halloween Kills will be released on Oct. 16, 2020, followed by the final movie in the series, Halloween Ends, which comes out on Oct. 15, 2021. Halloween Kills is the twelfth film in the franchise and a direct sequel to the 2018 film Halloween, which stems from the 1978 movie also called Halloween. In response to the movie announcements in July, Curtis tweeted, "Well, my friends and fans....I’m just WARMING UP."

In a Sept. 16 interview with Collider, Curtis shared that she signed on for the sequel because it explores the trauma of the original movie. She said, "The trauma that occurs for these characters for forty years, I felt was very important that [director] David [Gordon Green] understood that and was really giving Laurie great honor to acknowledge that her experience of her life was very challenged."

Curtis elaborated, "What I love that David and [writer] Danny [McBride] and company did is they connected the dots for forty years, now they’re going back to really unpack the first movie, bringing back all those characters whose lives were affected by what happened in 1978."

Curtis is not the only one reprising an original role in the Halloween movie series. Nick Castle returns as Michael Myers, the villain in most of the movies in the Halloween franchise. James Jude Courtney will also play the part. Charles Cypher will play Sheriff Leigh Brackett again. Nancy Stephens is back as Marion Chambers. Real Housewives of Beverly Hills star Kyle Richards will play Lindsey Wallace again for the first time since the original movie.

On August 30, Richards confirmed her role in the sequel with an Instagram post. Among other things, she remarked, "I have always been so proud to have been a part of Halloween. Bringing Lindsey back is very exciting!" In her own Instagram post that same day, Curtis described Richards' part in the film as "completing the circle!"

As successful as the Halloween franchise has been, even Curtis didn't expect it go on for decades. In a 1983 interview with Entertainment Tonight, Curtis said, "I think classics are classics. I think Halloween could be one. If they are classics, it’s just because they were able to keep you in suspense without making you throw up, and I think [Halloween] did that."

And the movie did more than that. The film had a budget of just $325,000 and ended up grossing $47 million in the United States, per Box Office Mojo. Beyond that, it helped launch a whole new genre: slasher films, paving the way for Scream, A Nightmare on Elm Street, Friday the 13th, and other successful movies in the genre.