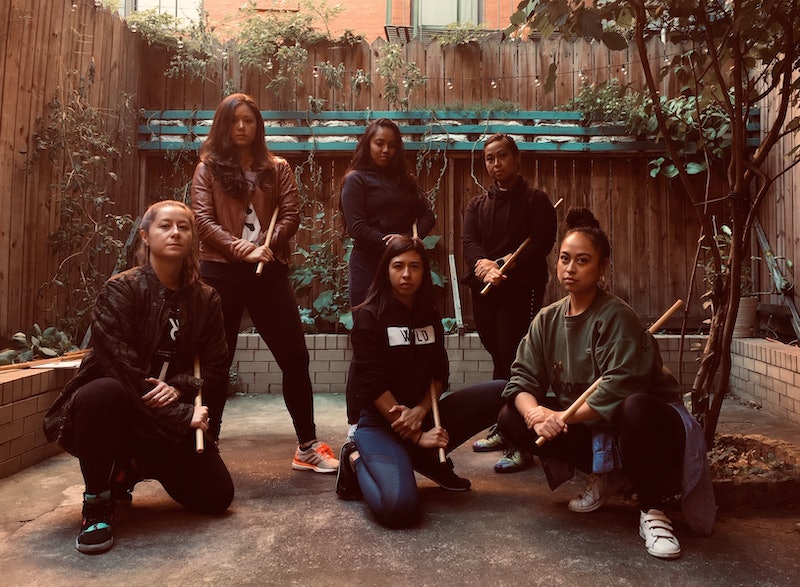 In Los Angeles, Jamie Yancovitz trains her students at parks under swaying palm trees; meanwhile, in New York City, Kristen Cabildo trains hers in the backyard of her brownstone apartment. They're two women on two different coasts but with one calling: to create a safe space for other women, particularly Filipinas in the diaspora, where they can learn self-defense skills as well as the history and cultural heritage of their ancestry — all through Filipino Martial Arts (FMA).

It makes sense that Yancovitz and Cabildo are using FMA (also known as Arnis, Eskrima, or Kali) to train women in self-defense skills as the history of this martial arts is rooted in resistance and survival — a history that goes back even before the Spanish Conquistadores arrived in the Philippines in 1521. For centuries, native Filipinos created fighting techniques to combat attackers from local tribes and foreign lands including Spain, the United States and Japan. It’s why FMA consists of multiple fighting systems developed by native Filipino families or tribes from different regions of the Philippines. For example, Cabildo is trained in close-quarter knife combat through Inosanto Kali and Sayoc Kali, and Yancovitz is also trained in close-quarter combat but through Pekiti Tirsia Kali, or PTK, all three are unique fighting styles are based on the Philippines’ traditional blade art. And all FMA styles incorporate blade, stick, and empty hand techniques.

Today these fighting systems, each with a grandmaster to carry on their legacies, have been adapted to be practiced as martial arts using FMA as its umbrella term, but PTK is the only one currently used by military forces in the Philippines and the United States, says Yancovitz. Because of the connection to the word “military” in “martial arts,” Yancovitz prefers to call FMA “indigenous fighting arts,” as it best describes what she and others like her are training and practicing. At her Survival Arts Academy Yancovitz, who has been training martial arts for 25 years and currently PTK under Grandmaster Tuhon Leo T. Gaje Jr., arms herself with blades and books — the former as her tools in training PTK and the latter as her resources to educate her students about this same Filipino history. She points out that many Filipinos may not be familiar with the Philippines’ history “warrior bloodlines,” which also had women warriors leading Filipino groups to resist colonization.

But on top of the trainings and educational discussions, Yancovitz starts with cultivating basic concepts of consent, respect, and boundaries to her students as young as five years old. “With little girls, for example, when I work with six-year-olds or five-year-olds, the first thing I teach them is how to say no,” she tells Bustle. Yancovitz founded Survival Arts in the Philippines in 2013 as a response to the attacks young women were facing during their jeepney rides (a type of public transportation in the Philippines). Last year Survival Arts moved to Los Angeles, where Yancovitz says they're continuing their work “to empower women and girls against sexual assault, rape, and all forms of violence.”

“Our [fighting] system is purely combative which makes it really helpful, really useful for women to fight off larger, bigger attackers,” Yancovitz says, on why PTK is effective as a form of self-defense. “I really use the techniques that I believe are the most important in PTK to apply when a woman is in danger.” In the one year since replanting Survival Arts in California, Yancovitz has trained over 300 women and children from communities of color and the LGBTQ community. And the positive responses from her participants has her wanting to spread Survival Arts by creating chapters all over the country and the Philippines led by Filipino women instructors.

Last March, Yancovitz visited New York for a two-day Survival Arts retreat co-facilitated by multidisciplinary artist and educator Jana Lynne Umipig who brings her ancestral healing work at the New York City chapter of Survival Arts. “As women, our motivation [to learn] is to preserve ourselves, to protect our bodies, to protect our children, to protect our family,” Yancovitz says. “That motivation is what brings us all together, no matter where we come from. There is a sisterhood that is built, and it’s beautiful and it’s expanding.” According to YanCovitz. Survival Arts will be further expanding throughout Southern California, the Bay Area, Seattle, and Boston as well as Manila in the Philippines.

Cabildo, who has a clinical background in social work, says martial arts training not only makes women feel empowered, but teaches them about what their bodies are capable of, too. “Being able to tap into the body’s physical power is something that we’re not taught as women to do,” Cabildo tells Bustle. She says that martial arts can help women to trust their bodies and to sharpen their strength, agility, and instinct. That once women acquire the tools to understand how to move their bodies as weapons, they can start living in a “counter-narrative” that is based on their own choices.

These tools Cabildo speaks of include how to stay calm in stressful scenarios or dangerous confrontations, how to get back up after being knocked down, how to communicate efficiently with others, and how to have a healthy inner voice. “All of these skills can translate to how we navigate stress in the real world, either at work, within our interpersonal relationships, or when we seek to overcome obstacles in order to achieve other goals in life."

Gaining these tools is why Cabildo took up martial arts 18 years ago; she wanted to travel and feel she can do anything as a woman of color. Cabildo trained Kali under the Grandmaster Dan Inosanto — who is known for being a training partner to the late Bruce Lee — and she is currently training Sayoc Kali (called the Art of the Blade) under Pamana Tuhon Chris Sayoc Sr. She also trains Jeet Kune Do, Muay Thai, and Brazilian Jiu-jitsu. Cabildo shares her extensive martial arts skills with other women either through self-defense classes at Brooklyn’s Unlimited Martial Arts or her full-day workshops outside her backyard.

In both the classes and workshops, Cabildo also incorporates the history of FMA. Her full-day workshops consist of educational videos and discussions on Filipino culture and FMA, followed by Kali training and then a Filipino meal collectively cooked by Cabildo and the other women. Cabildo loves teaching workshops, as they give her the intimate space to work solely with other Filipino women who can feel like themselves with one another.

While Cabildo and Yancovitz are parting their martial arts skills and cultural knowledge to other women, they also get a lot out of the FMA spaces they have created. Cabildo says, “It’s given me an opportunity to be proud of being Filipino and to have tools at my disposal if I’m in a physical situation where I could defend myself.”

This article was updated from its original version on June 24, 2019.