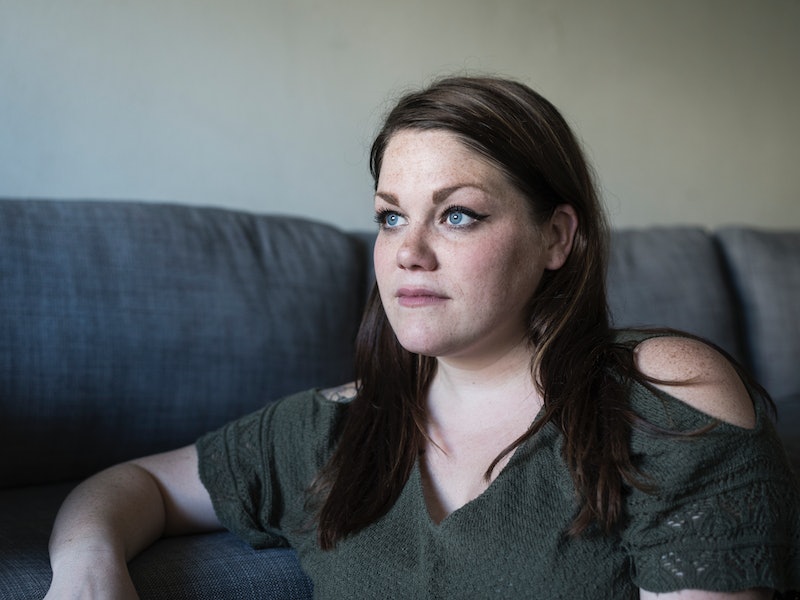 In 2019, dating is hard, especially for women. No one can know for sure what a swipe right on Tinder means, or if a night will even end safely. With one personality and one subconscious leading your decisions, it can sometimes be tricky to make the right one. Could you imagine that process with nine distinctly different personalities chiming in? There are so many people out there who live in that reality every day. Jane of Many Sides of Jane, A&E's new docuseries, was diagnosed with Dissociative Identity Disorder (DID) at 24 years old, and she and her personalities, or "parts," as she calls them, are facing that challenge head-on.

According to the show, experts estimate that over 3.25 million Americans have DID. But thanks to media and pop culture-driven narratives (think: films like Split and Sybil), the disorder has a harrowing reputation.

In the series premiere, Jane and her therapist explain that she is in no way, shape, or form a danger to herself or her two sons, Daniel and Remington. "It makes for a great movie," Jane says of the stigma surrounding DID. "But it's not real. It's not who we are." Later, she admits to initially being afraid of making the documentary, because "the stigma is really thick," she says. "But I feel like it's time we right that wrong."

Jane is simply a young mother who, unfortunately, has experienced a lot of trauma and abuse in her life, which resulted in DID. This is common among DID patients, according to the Cleveland Clinic. Each of her nine parts have names, ages, and personalities. And they each hold a place within her that helps her survive and cope with her past.

After her diagnosis, therapy became a safe space for her parts to let their voices be heard. Sometimes, they can be conflicting in their wants and needs, and Jane is slowly learning how to encourage them all to work together — especially when it comes to dating.

"The goal of therapy is not to get rid of my parts," she assures. It's to get them all to communicate and work together "like a family."

She has finally reached the point of being transparent with some of her friends about her DID, but that doesn't necessarily mean her parts show themselves when she's around them. She says on the show that her parts don't want to draw attention to her disorder, so they tend to stay quiet. It isn't until she enters an intimate relationship with someone that her parts' voices grow louder and more opinionated.

"I'm honestly afraid I'm never going to get married again," Jane says on the show. "My parts sabotage my relationships because they all have different opinions about who they would like to see as our partner."

Since being diagnosed with DID, Jane has dated two people, both of which who came to know a few of her parts. "My parts had conflicting feelings about Ryan," Jane says, referring to her ex-boyfriend. They dated for a while, but ran into the most issues when Beth, Jane's 10-year-old part, would surface in angry outbursts, detesting Ryan's companionship.

Jane's younger parts in particular tend to struggle with her dating life, especially when it comes to having sex. They don't wish for any physical contact beyond a hug, she says, and can be triggered during any type of intimacy. Ryan also didn't bode well with Madison, Jane's 28-year-old part who is gay. She would prefer that Jane had zero physical contact with men at all. After breaking up with Ryan, Jane found Bri.

"Bri's the first woman I've come out with and dated publicly," Jane says. But they ended things after Bri struggled to navigate the inconsistencies within Jane's parts. Jane, and all of her parts, really struggled with that breakup, but wants what's best for all of her — not just one part.

"The goal of therapy is not to get rid of my parts," she assures. It's to get them all to communicate and work together "like a family."

At this point, Jane doesn't want to get hurt again, so she's afraid to yearn for anything more serious than a fun night out. And viewers will be able to watch her work through all of this on the series — while parenting two young kids, too. Her journey will make you rethink everything you think you know about DID and the people that live with the disorder, and for that reason alone, it's worth tuning in.