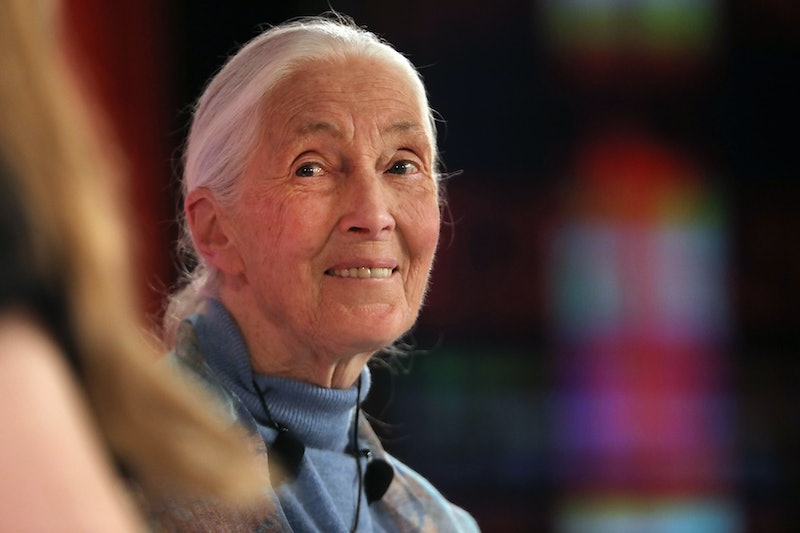 The world's foremost expert on chimpanzees, Dr. Jane Goodall condemned a viral video of a chimpanzee using a phone to scroll through Instagram. While many on social media were awestruck by the video, the primatologist has expressed concern that it promotes inappropriate handling and attempted domestication of chimpanzees, which Goodall is quick to remind people are not meant to be pets.

"I am very disappointed to see the inappropriate portrayal of a juvenile chimpanzee in this video, which is currently circulating on social media," Goodall said in a statement released by the Jane Goodall Institute. "Chimpanzees are highly social animals, very intelligent and have complex emotions like humans — it is imperative that we portray them appropriately and that they receive the best possible care in captive environments."

The video in question was posted to Instagram earlier this week by Mike Holston, or as he is known online — @threaltarzann. On Instagram Holston says his interests include "animal education and conservation," and his YouTube promises "a variety of animal and wildlife content," including footage of "my own personal zoo." In the video, a chimpanzee — tagged by Holston as either Sugriva or Vali, two 7-year-old chimps owned by Doc Antle's Myrtle Beach Safari, a safari park in South Carolina where tourists can pay to interact and take photos with animals — scrolls through Holston's Instagram feed, watching videos and clicking between posts. Bustle has reached to Holston for comment.

In her statement, Goodall goes on to argue that videos such as this one, which seem to portray chimpanzees as domesticated pets, perpetuate the illegal pet trade in great apes. But according to Goodall, great apes "cannot be domesticated" and "interactions with humans as displayed in this video are highly dangerous, as well as harmful to the well-being of the chimpanzee."

Goodall's institute further alleged that Holston "promotes mishandling and inappropriate captive care" of another chimpanzee named Limbani, who resides at the Zoological Wildlife Foundation. "In other videos, Limbani is not with other chimpanzees (as he should be, chimpanzees are extremely social and require a chimpanzee community or at least company), and is often dressed in clothing, interacting with humans, all to promote the brand of this influencer and this establishment," the institute said, adding such actions were "certainly harmful to the long term psychological and physical needs of this young chimpanzee."

Goodall has asked people to not like, share, or comment on the video and urged those with chimpanzees in their care to cease using them in such exploitive ways. "Join those of us who are working to end the cruel treatment of chimpanzees in entertainment," she said.

More like this
Picky Eater? Sensitive Stomach? This Vet Nutritionist-Designed Dog Food Has A Plan For That
By Maria Cassano
The 5 Best Blankets For Puppies
By Jenny White
Matt Hancock’s TikTok Is The Most Matt Hancock Thing Ever
By Sam Ramsden
Jennifer Coolidge Hunted For Jewels & Lashes In J.Lo’s Hotel Room
By Jake Viswanath
Get Even More From Bustle — Sign Up For The Newsletter
From hair trends to relationship advice, our daily newsletter has everything you need to sound like a person who’s on TikTok, even if you aren’t.