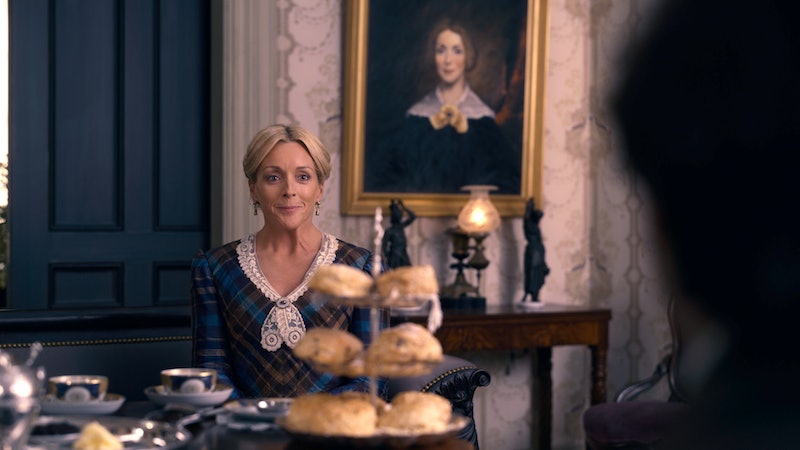 Apple TV+'s new series may focus on the life of poet Emily Dickinson (Hailee Steinfeld), but Jane Krakowski's Dickinson character, Mrs. Emily Norcross Dickinson, plays a major role in her daughter's story. The show is described as a "coming-of-age story—one woman's fight to get her voice heard," and the fact that the relationship between mother and daughter was said to be somewhat fraught due to Mrs. Dickinson's more conventional outlook on life, she will obviously play a large role in her daughter's story.

According to BBC America, Krakowski will appear in all 10 episodes of Dickinson's first season, which seems to confirm that theory. While there's no telling how central to the series' dramas and conflicts Mrs. Dickinson will be, the rather tenuous connection between the mom and her middle child may be an interesting thread to explore.

The role of the conservative, straight-laced Mrs. Dickinson is somewhat of a change in tone for Krakowski, whose recent roles include the wealthy and hilariously clueless Jacqueline White on Netflix's Unbreakable Kimmy Schmidt and the similarly zany and oblivious Jenna Maroney on 30 Rock.

That being said, Krakowski seems just as comfortable in dramatic roles, having starred in soap operas Search For Tomorrow and Another World before making the leap to primetime in Ally McBeal. She's appeared in smaller capacities in many other shows over the years, from episodes of Law & Order: SVU and Modern Family to voice work in BoJack Horseman and The Simpsons. Her film roles include Mrs. Winterbourne, The Flintstones in Viva Las Vegas, and Pixels.

In an interview with Variety, Krakowski revealed that she was inspired by shows like The Mary Tyler Moore Show, Rhoda, and Phyllis growing up. While this likely influenced her decision to become an actress, her love of the female characters on those shows also drew her to Dickinson, as she believes it could have the same positive effect on the current generation of young women.

"I think this show will inspire young women to believe in their own voice, to go after what they want, even if it sometimes feels like the world is saying no," Krakowski told the publication. "In the same way a Billie Eilish song can make you feel like you belong, I think Emily Dickinson could have the same influence on young girls today."

It's a sentiment Steinfeld herself echoed, telling Variety, "I mean, I could have used this a couple of years ago, but I can use every bit of it in my life right now. And I can only hope that other young girls see the show and feel fearless and courageous and can embody that sense of Emily Dickinson, as well."

Mrs. Dickinson may not be the star of Dickinson, but with Krakowski behind the role, her character is sure to be memorable.

More like this
Every 'That '70s Show' Character Who Returned For The Netflix Spinoff
By Grace Wehniainen
Here’s What Happens To Bill & Frank In 'The Last Of Us' Video Game
By Brad Witter
Shonda Rhimes Responded To The Surprise Exit Of A Day 1 'Grey's Anatomy' Figure
By Grace Wehniainen
Everything To Know About A Potential 'Lockwood & Co.' Season 2
By Gretchen Smail
Get Even More From Bustle — Sign Up For The Newsletter
From hair trends to relationship advice, our daily newsletter has everything you need to sound like a person who’s on TikTok, even if you aren’t.