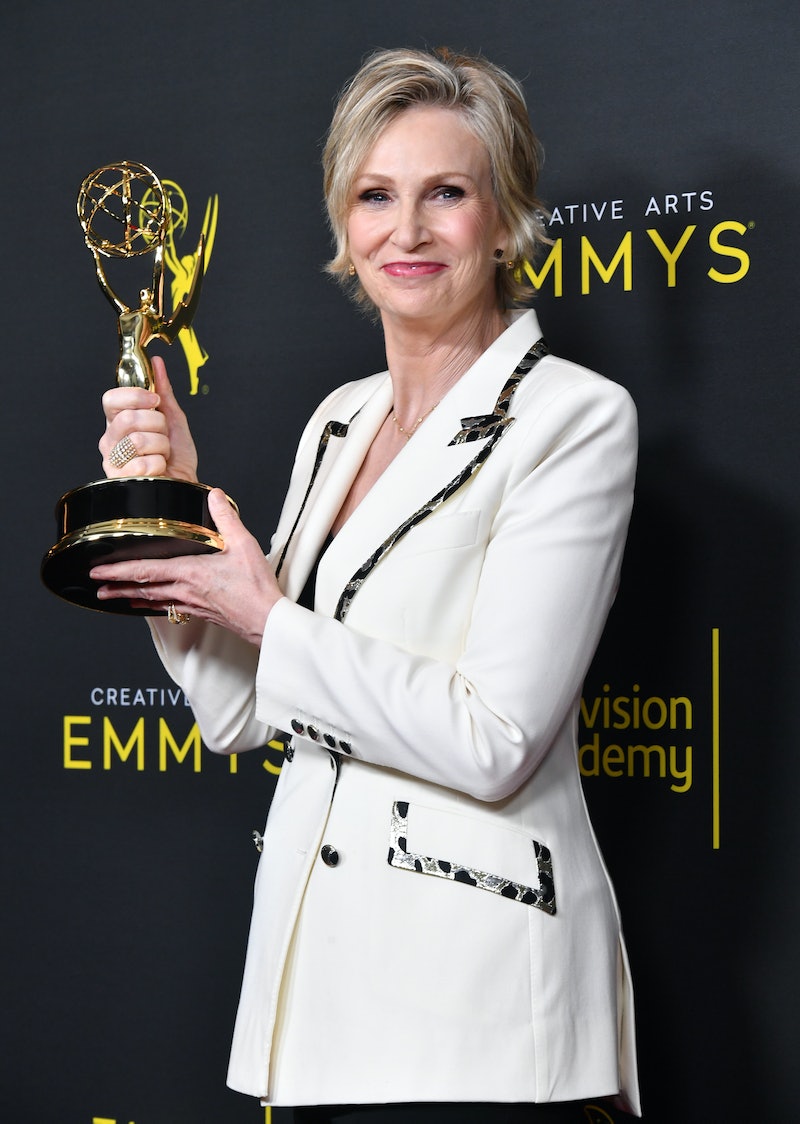 No matter how old you are, Golden Girls remains a classic for every generation, and while the show can never return, a new version of the iconic sitcom may be on its way. After taking home a win at the Creative Arts Emmys, Jane Lynch revealed that she's starring in a new Netflix show with Cyndi Lauper. And when it officially comes to fruition, Jane Lynch and Cyndi Lauper's new Netflix show just might be the modern version of Golden Girls that everyone needs today.

On Sunday, Sept. 15, just minutes after Lynch won the Emmy for Best Guest Actress in a Comedy Series for her role as Sophie Lennon in The Marvelous Mrs. Maisel, she told reporters in the backstage press room that she had recently sold a show to Netflix with Lauper. But, according to The Hollywood Reporter, the comedian originally refused to say anymore, saying she didn't know "if I can even talk about it." However, after some more coaxing from the press, the actor revealed some more details about the exciting new show.

Lynch and Lauper will play women true to their age who are embarking on their next chapter in life. "We're our age, I'm almost 60, she's 65, and we're looking for our next act without having had husbands or children," she explained. The twosome won't be the only stars onscreen, but Lynch said she wasn't sure just yet about who will join them in the cast. "There will be two other folks in it who haven't been cast yet. It's kind of a Golden Girls for today."

This actually isn't the first time people have heard about the project. Back in July 2019, The Ellen Show creator and Seinfeld writer Carol Leifer announced on Facebook that she would be working with Lynch and Lauper on a new half-hour comedy. "IT’S OFFICIAL!! Headed out next week with a new half-hour comedy, starring Jane Lynch & Cyndi Lauper!," she posted at the time. "A writer’s dream to work with these two LEGENDS. Can’t wait to see where we land..." According to THR, the new show was created by Leifer and Steven Engel.

The as-yet-untitled series will be Lauper's first leading role on a TV show, after having guest roles on shows like Bones, and the latest big project in what's been a huge year for Lynch. The actor is expected to return to Mrs. Maisel for its third season, and the Emmy she just took home is her fifth, after previously winning for hosting Hollywood Game Night, Dropping the Soap, and her most iconic role as coach Sue Sylvester on Glee.

During her speech, Lynch thanked fellow female comedians like Joan Rivers and Phyllis Diller who came before her, saying “I would like to dedicate this lady to those gals who blazed the trail," according to Entertainment Weekly. And with her new show, Lynch will be part of the modern wave of funny women to pave the way for the future generation.

While Netflix hasn't announced an official premiere date yet, it's never too early to start preparing for greatness. And a modern Golden Girls sounds nothing short of a new classic.

More like this
'That '90s Show' Star Callie Haverda Got Advice From Mila Kunis & Ashton Kutcher
By Brad Witter
Here’s Why Danny Masterson’s Hyde Isn’t In 'That '90s Show'
By Brad Witter
At 28, Debra Jo Rupp Was Living A Much Different '70s Show
By Grace Wehniainen
Man Meets Politics: ‘Boy Meets World’ Star Ben Savage Is Running For Congress
By Jake Viswanath
Get Even More From Bustle — Sign Up For The Newsletter
From hair trends to relationship advice, our daily newsletter has everything you need to sound like a person who’s on TikTok, even if you aren’t.