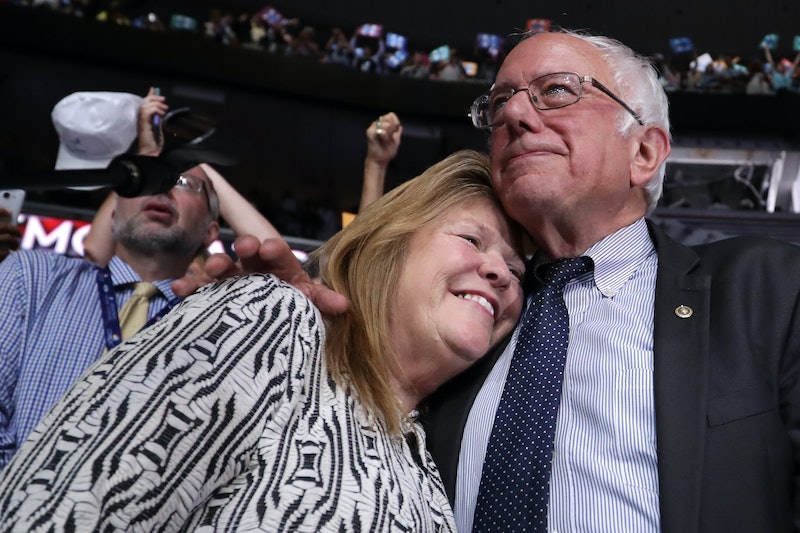 While introducing Vermont senator and 2020 presidential candidate Bernie Sanders at his kick-off rally in Brooklyn on Saturday, Jane Sanders joked about identifying as a wife even though it "might not be politically correct" to do so. Her comments ignited a flurry of debate on Twitter, with some arguing the senator's wife was playing into conservative stereotypes about progressives.

"I feel honored to be his wife and I know that might not be politically correct to identify myself as a wife, but it's one of the great honors of my life," Jane told the crowd Saturday at Sanders' kick-off rally at Brooklyn College in New York. Earlier in the day, Jane had introduced herself to the crowd by saying, "I'm Jane Sanders, better known as Bernie's wife."

Some Twitter users were quick to point out that the idea that liberals malign women who self identify as a wife is commonly used by conservatives as a means of undermining liberals' commitment to family values. When The Washington Post's Dave Weigel shared Jane's statement on Twitter along with the comment, "We're not at [the Conservative Political Action Conference] CPAC anymore," a number of Twitter users argued that her comments sounded exactly like something you'd hear at CPAC.

"Seems almost exactly like the kind of dig someone would make at CPAC, though," Twitter user Caissie St.Onge wrote in response. Another user characterized Jane's remark as an "eerie echo" of "the kind of dishonest dig at liberals CPAC are making today." Others characterized it as being "weirdly antagonistic" and an "unnecessary shot."

Others merely pointed out that self-identifying as a wife was something commonly done among liberal women. "It's so brave of Jane Sanders to buck the oppressive political correctness championed by liberals by proudly identifying as a 'wife,'" one Twitter user joked, noting that Michelle Obama, Hillary Clinton, Elizabeth Warren, and Kamala Harris all identify themselves as wives in their Twitter bios. (For the record, Sen. Kirsten Gillibrand also identifies herself as a wife in her Twitter bio.)

Others wondered why Jane would even appear to mock political correctness at a Sanders campaign rally. "It says a lot about who Jane Sanders thinks she's talking to that she takes a jab at political correctness - something associated with feminists and anti-racists," Jill Filipovic, author of The H-Spot: The Feminist Pursuit of Happiness, tweeted. "Cool joke."

One Twitter user wondered if the remark wasn't meant to be a subtle signal to anti-Trump conservatives. "In my opinion, this is a very loud dog whistle meant to be heard by conservative voters put off by female presidential candidates," Leah McElrath tweeted.

Still, some Twitter users, such as Michael Tracey, appeared to support Jane's remark about identifying as Sanders' wife. "It was sweet," Tracey tweeted of the comment.

While it's unclear where or why Jane may believe it's politically incorrect to include "wife" as part of her self-identify, Tabitha King recently made headlines for condemning news outlets who'd previously identified her only as Stephen King's wife. "Wife is a relationship or status. It is not an identity," the novelist (yes, Tabitha is an established author as well) said in response to media outlets' failure to use her name in coverage of a sizable donation she'd made.