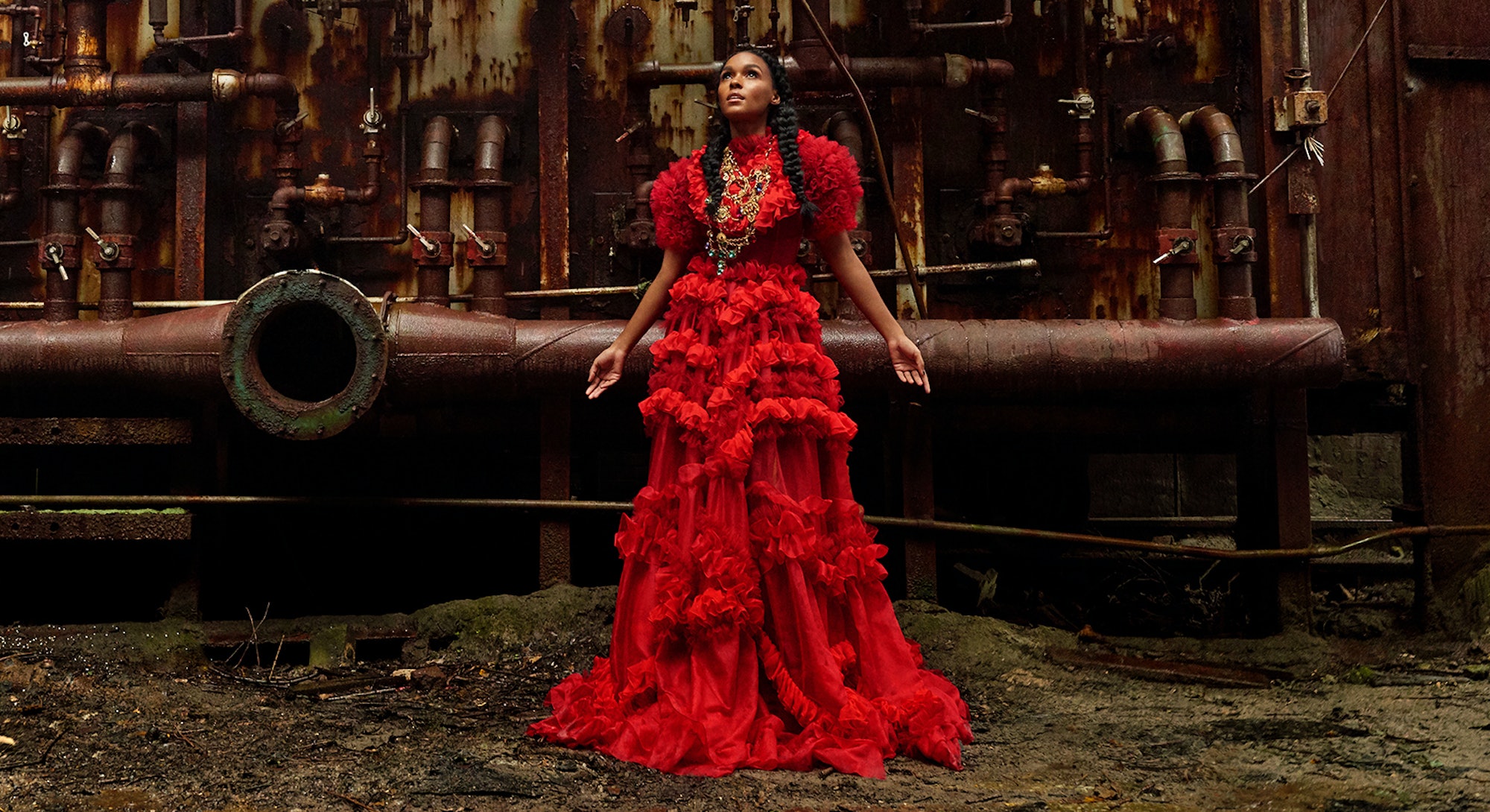 Janelle Monáe is utterly composed as she tromps through the mud in many lengths of banana-hued silk organza and a pair of rain boots from Lowe’s. Handlers and helpers hold her hem high, their umbrellas lofted to protect the Mongolian lamb fluff on the David Ferreira overcoat dress and Monáe’s flawless face. Amid the downpour soaking the set (the historic Pullman Yards, a former munitions factory on Atlanta’s east side), Monáe approaches the camera poised, focused. She kicks off the boots and climbs atop a small tower of crates; she summits and smiles. She is a woman who knows her angles.

Janelle Monáe carries herself like a person who lives by a stringent personal code. She is careful and considered and clearly holds professionalism as a virtue. Historically, this has played as Monáe being in tight control of herself and her image. Her early career was built on a persona, with the young singer identifying herself as the android Cindi Mayweather, here from the year 2719 on a mission. The role contextualized her androgyny, but in other ways kept audiences and press at a bit of a distance, and from interpreting Monáe’s robot-love songs as biographical.

Her latest album, Dirty Computer, is still as conceptual as ever, but the crucial difference is that Monáe is beckoning her listeners in, eager to make clear her motivations, releasing videos ripe with can’t-miss references and AfroFuturistic imagery. The ideologies she refutes implicitly and explicitly in songs like “Django Jane” and the album’s closer, “Americans,” — “Try my luck, stand my ground / Die in church, live in jail / Say her name, twice in hell” — underscore that Dirty Computer is being issued from the very grimpossible America of now. “The pastor speaking on the album goes, ‘This is not my America / Until same gender loving people can be who they are / This is not my America / Until black people can come home from a police stop / Without being shot in the head,’” Monáe explains. “What I’m getting at is all of the groups, all of us can really win when we take that stance, that we’re going to protect each other. That’s the way that I’m trying to live. I’m walking in that even more because I see value in it.”

After the photoshoot, in the backseat of a black Suburban, Monáe is en route to a pop-up screening of Dirty Computer at a local arthouse movieplex here in her chosen community of Atlanta. She has ditched the day’s designer garb for her traditional uniform: a slate grey pinstripe suit, her face framed by white-tipped, waist-length, dutch braids. She’s starving after a long day slipping in and out of statement gowns but makes do for now with a small bag of chips. Monáe is reserved but warm, and unerringly polite. She honors any minor accommodation with a “Thank you so much.” Her assistant sits up front, mutely typing away on her phone. The rain has not let up.

It was really about just creating more space for me and other artists, black women in particular, to create new rules.

Monáe says that ultimately the message of the album isn’t anything new to her work at all; it’s been here all along. “It remixed itself. Some of the things I talk about in the music [I] have always spoken about. It was just packaged in a different way — same person, just in a different time.” All the distance that being Cindi Mayweather from the year 2719 afforded her maybe muddled exactly what she was getting at all along, making the material of Dirty Computer seem sudden to some, or at least as big of a surprise as when Tessa Thompson pops out from between Monáe’s ruffled pussy-pant legs in the video for “PYNK.”

But Monáe insists she’s the same artist with the same message. She’s just articulating more explicitly now what she believes and who she is allied with; in the wake of the 2016 election it all feels more urgent. Monáe, who came out to the press as pansexual in the wake of the album release, admits that without the buffer fame and success have afforded her, who she is would make her a target. “I’ve been very fortunate to be able to have a career and to perform,” she says. “When I walk off the stage, I’m still a young, black, queer woman, born to working-class parents.”

Dirty Computer marks a galaxy shift for Monáe as an artist, both metaphorically and narratively, broaching something more earthbound and decidedly more human. “It was really about just creating more space for me and other artists, black women in particular, to create new rules. If I can’t be all of me, whatever that may mean to me during that time — where I am spiritually, mentally, whatever person I identify as — when I’m releasing music, then I don’t want to do it.”

The album gets deeper context through the 42-minute “emotion picture” of the same name that Monáe released in the wake of the album, each song’s video lending itself to a loose story arc. Somewhere in a dystopian near-future, an authoritarian power is rounding up and cleansing “dirty computers” of their memories and personhood under the guise of turning them into pure vessels, willing tools of the regime. In the videos, Monáe runs with a highly-styled cabal of black and brown women; their vibrance is put into dazzling neon relief against bland institutional spaces and decimated landscapes. They party and seek pleasure while attempting to elude drones and a militarized police force that behaves as aggressively as America’s own. In this Dirty Computer world, connection, in all its forms, is seemingly criminalized. In this Dirty Computer world, connection is most often portrayed as fundamentally queer, black, feminine, joyous, and free.

At the packed Atlanta screening later that night, it is the boldest portrayals of that freedom that get the audience (young, almost exclusively black, in a wide array of gender expressions) most hyped. Hands go up for “Django Jane,” the whole theater shouting along with the lines “Black girl magic / y'all can't stand it;” moments of intimacy between Monáe’s character and Tessa Thompson’s “Zen,” the film’s heroine/love interest, elicit shouts of approval. When the lights come back on, some are wiping away tears. Monáe spends the rest of the evening autographing film posters for her fans in the lobby.

The narrative arc of Dirty Computer is anchored by the romantic, spiritual, and physical companionship between Monáe and Thompson’s characters — their bond sustains and, ultimately, saves them — building on the expansive view of sexuality that is present on the album. “One of the things that I wanted to do was to be very clear in where I stood around women and us having to always defend why we have natural desires. As I started to read more, I realized sex is a gift,” says Monáe. She cites The Great Cosmic Mother by Monica Sjöö, the classic feminist book on goddess culture, as the source of particular revelation, so much so the title shows up emblazoned on a pair of underwear one woman rocks amid a bedroom party in the “PYNK” video. “I wanted to make sure that in songs like 'PYNK,' we’re celebrating women — and not all women have vaginas or need to have a vagina to be a woman — but celebrating all of us. Celebrating all of the things that are beautiful about us in our sexuality,” she says, adding, “I was taught at an early age never to be open about how I feel sexually.”

We can be a part of the great divide. We can support evil men. We see it happening right now.

Through the first half of the interview, Monáe speaks vaguely, referencing herself within a “we” that is alternately women, conscientious Americans, and — broadly — humanity, but she’s quick to clarify that the “we” of womanhood is complex. “We’re not monolithic. We can be a part of the great divide. We can support evil men. We see it happening right now,” she says. Which is why she’s appreciative of the women whose thinking and activism have influenced her in the last few years. When the discussion turns to their ideas — and hers in relation to them — she becomes eager and animated. She toggles to first-person and stays there, speaking definitively about where she’s at and what she believes. She rattles off the women she admires and why: Yara Shahidi, Amandla Stenberg, Lena Waithe, Lupita Nyong’o, Issa Rae — all women she says use their platforms in the service of something greater and encouraged her “to do more and to be better.” So what does Monáe’s “more” look like these days? Dirty Computer is part of it.

I come in peace, but I mean business.

This is a very American album, through the lens of a black woman, and it’s saying that this country may not be working in my favor now, but it will be in mine before it’s all over.

Though she suggests her work is that of an ally and less an activist, the accelerated erasure of human rights since the election factors in to both Monáe’s art and her actions outside of music, as she has publicly aligned herself with the Women’s March, Time’s Up, as well as Black Lives Matter protests around the country. She says her mantras are “choose freedom over fear” and “I come in peace, but I mean business.” Her abiding belief is in the radical power and possibility of music. For Monáe, Dirty Computer’s celebration, truth-telling, and joy are acts of resistance, but she also sees the album and subsequent tour as a safe space: “Things could absolutely get worse, and so what I’m choosing to do instead of wake up every day with hate in my heart for the abusers of power in the White House, I’m choosing to focus on celebrating the folks that need it most. Focus on the marginalized. Focus on the people that I can directly impact through my music, through my art. I think that my time is better served making them feel like they have community.”

The singer offers up an explanation, just to clarify any misunderstanding or willful complication around this album’s position: “We have a vice president who believes in conversion therapy. That is a form of trying to cleanse somebody. That is a form of saying you have bugs and viruses, you need to be cleaned. That is what it means to have to live in the world as a ‘dirty computer.’” A dirty computer in this specific instance is a stand-in for queer identity, but a dirty computer is anyone who is persecuted, marginalized, left unsupported. A dirty computer is anyone whose mere existence in America is criminalized. But Monáe knows she is not dirty, and refuses to accept the lie that she is, singing in “Crazy, Classic, Life”: “I’m not the American nightmare / I’m the American dream.” Monáe explains this, cool as anything, growing emphatic, “This is a very American album, through the lens of a black woman, and it’s saying that this country may not be working in my favor now, but it will be in mine before it’s all over. That is the hope that I want to leave, because that’s the hope that I mean.”

Styling: Alexandra Mandelkorn for The Only Agency