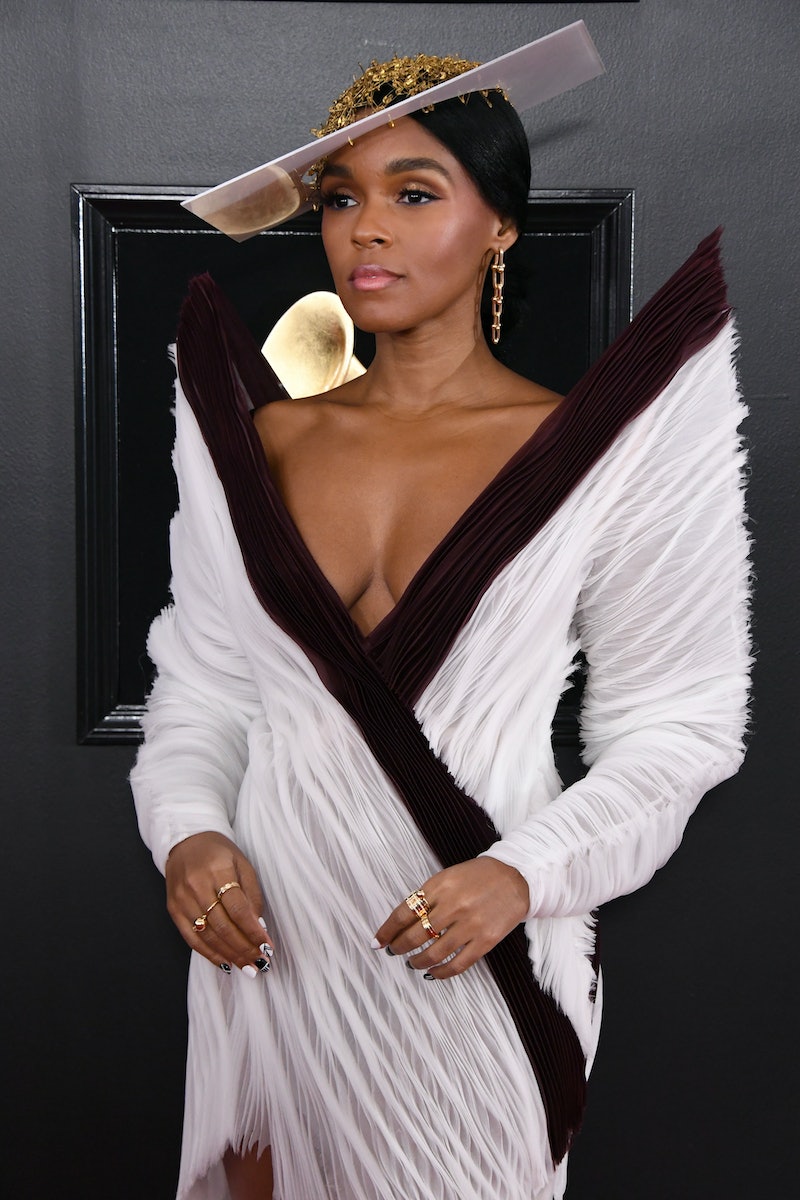 There's a long list of women in Hollywood whose style sometimes makes you want to ditch traditional gowns forever and trade them in for something different. The newest inspiration for this type of look is Janelle Monae's Grammy outfit. Monae always wears something unique, and her 2019 Grammys look certainly doesn't disappoint in this regard. The singer is serving fans "bawdy" for days, years, and beyond.

The "Pynk" singer came to turn heads and break necks to the 2019 awards show, wearing a short, but super sculptured dress on the red carpet and still looking dapper as ever. The dress (though the term 'dress' doesn't quite do this sculptured piece of art justice), featured high pointed shoulders that reached her ears and a deep-V neck. The fringe-like dress featured a velvet detailing down at the shoulders and down the dress, making this look one of the big hits of the night. Monae wore a pair of black shoes with the dress, making the entire red carpet appearance look simple, but very chic. Usually, the best dressed stars on the carpet are those wearing the most unique dress — and Monae's ensemble definitely falls into that description.

Not only is Monae known for putting on a good look and a good show, but she's also someone to look to for hair and hat inspo. Monae hit up the red carpet looking like she came from an appointment with Wakanda's fashion designer, and her hairstyle was just as mesmerizing as the outfit she donned. The singer wore her hair in a sleek bun, and accessorized with a just as art-worthy headpiece. She also wore a combination of chain earrings in two different sizes, proving that her fashion creativity extends to accessories as well.

At this year's 61st Grammy Awards, Monae is nominated for Album of the Year for Dirty Computer and is also a performer at the awards show. The singer performed her hit single "Make Me Feel," blowing the roof off of the Grammys house.

For Monae's performance, the singer went back to her suit and tie roots, wearing a black and white collard latex bodysuit with a small red tie and fishnet stockings. The body suit played off of her red carpet look with another set of high pointed shoulder pads.

Monae has made a name for herself as a show stopper since she first came into the spotlight with the late Prince as her mentor. Apparently, she's learned from the best of power performers, taking inspiration from greats like Prince in her music as well as in her style.

For this year's Grammy Awards, Monae is nominated for two awards: one for Album of the Year (Dirty Computer) and one for Best Music Video ("Pynk"). The Grammy-nominated singer has been nominated for eight Grammy awards in her career, but has yet to win.