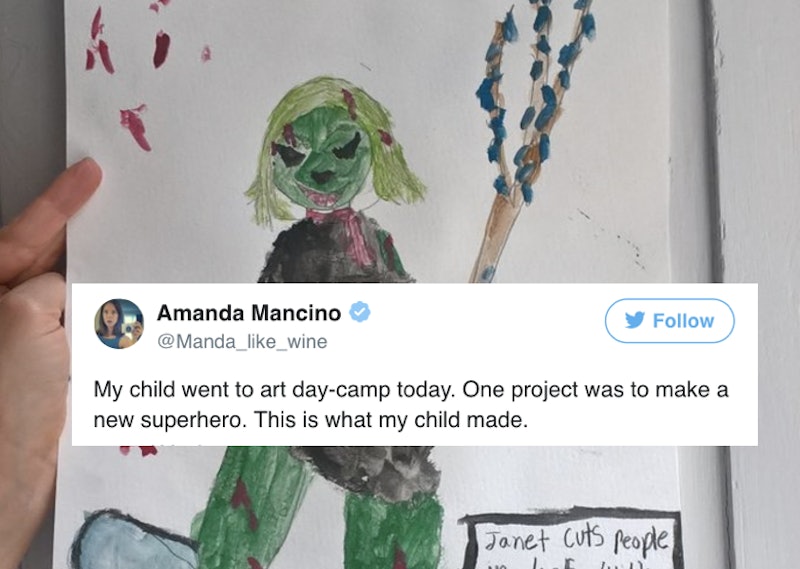 Not all superheroes wear capes. Some of them carry scissors and big sticks and stuff. That's the lesson we've learned from one child's drawing of a superhero that went viral. Ten-year-old Luca went to art camp, where they were instructed to draw their own superheroes. It was an exercise in creativity, and little Luca went the extra mile. Her superhero, named Janet, wields a giant stick and bloodied scissors. Her eyes are dark and angry, and she's covered in splatters of blood, presumably that of her victims. In case there were any doubts, Luca specified on the drawing, "Janet cuts people in half with giant scissors. (She's only a hero to herself.)"

Luca's mom, Amanda Mancino, shared the drawing on her Twitter page in a tweet that has since then gone viral. Some Ecards spoke with Mancino on Twitter, where she said of people's responses, "The positive feedback has definitely outnumbered the negative by far. A small group have advised me that I'm raising a serial killer and should put her in therapy."

People, let's be real: Janet is a superhero we can all relate to. Don't we all secretly/not so secretly fantasize about hitting people with sticks? Obviously!

Here's Luca's brilliant artwork. I think the child has a real talent.

If we're being honest with ourselves, Luca simply drew how many of us feel. Wise beyond her years? I think yes. And don't even get me started on how at the young age of 10, Luca already knows that you — yes, you — can be your own hero.

Tweeters of the interwebs were so moved by the drawing that the fan art began flooding in. People were inspired to create their own rendition of Janet, who's quickly becoming a household name.

Fan art wasn't enough for some #Janet fans, so they turned to cosplay instead, like this wee one who opted for Janettime over bathtime, understandably.

Who needs Captain American and Iron Man when you've got Janet, a superhero to adults the world round?

If there were ever a piece of artwork that belonged taped to the refrigerator, this would be it.