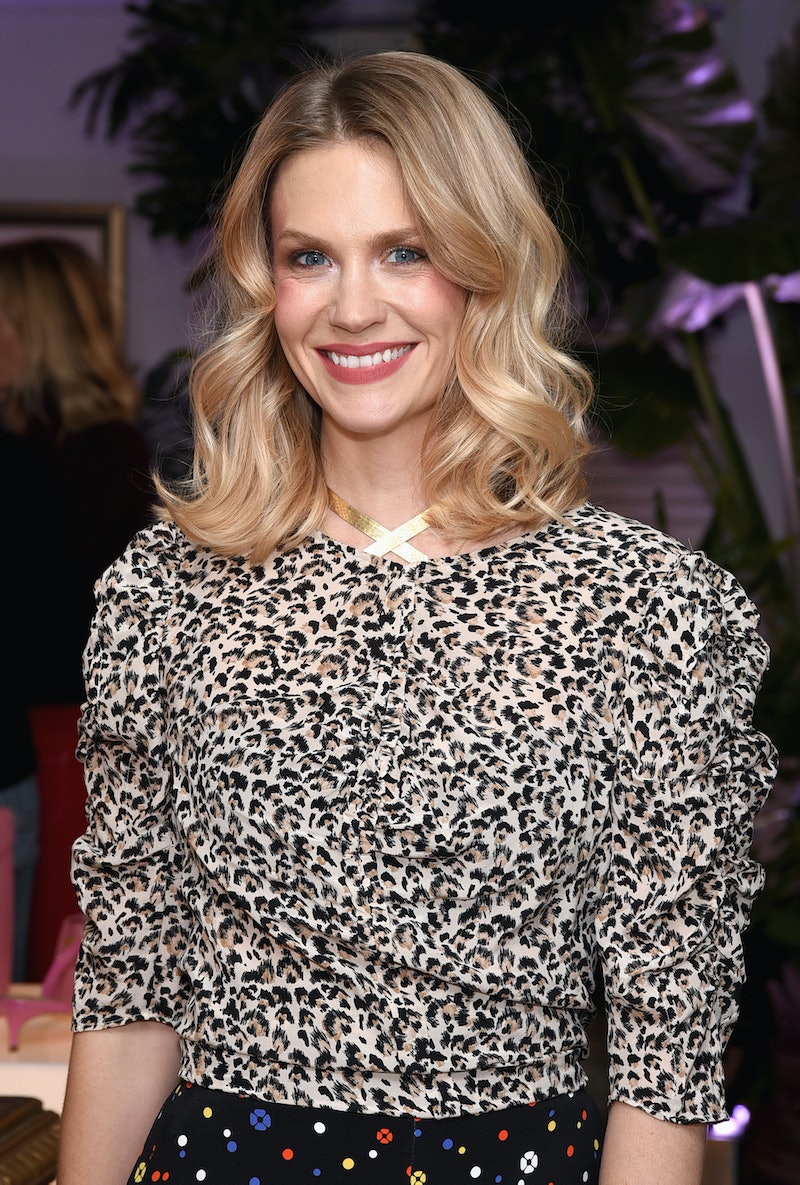 January Jones just got a summertime hair update, and her new chop will make you want to reach for a pair of scissors. January Jones has a bob now, and the sleek, blunt cut is going to have you reconsidering your own length.

The actress has been wearing her blonde hair shoulder length this past year, so the chin grazing bob is quite the change. Jones revealed the new look on Instagram, posting a photo of her sleek cut. "So I changed my mind again," Jones captioned. She then tagged Bridget Brager in the caption, calling the stylist "a dream."

Brager is a Los Angeles-based celebrity hairstylist, that has worked on everything from red carpets to New York Fashion Week runways. Her appointment book is filled with A-list names like Kate Bosworth, Kristen Stewart, Sarah Paulson, and Gwyneth Paltrow.

Scrolling through Jones' Instagram comments, you will find that Elle Fanning jumped in with some praise, writing, "Oh my god you did it!!!!!! That is the dream cut." This makes it sound like Jones was considering cutting her hair for a while now, but couldn't part with her length.

Hopping over onto Brager's Instagram page confirms that guess. Brager posted the same selfie onto her own page, while giving a little more insight into the hair appointment.

"Welp, we finally did it! January Jones has sent me blunt bob hair inspiration pics for months!! We’ve been waiting for her (old) bangs to grow long enough to give that perfect blunt bob, middle part look. Patience," Brager explained.

The stylist also explained that the trick to creating this sleek look was taking the width from Jones' hair without cutting layers. This was important in order to create movement. But what Brager really wanted to get across by posting the photo of Jones' new bob was that every woman could rock the look, even if she thinks she can't.

"Here’s what I really want to say... There is a bob style haircut for every woman — every hair type and face shape," Brager wrote. "If you have been teetering to make a big hair move ... Fear not. Go for it! Make sure you bring inspiration pictures and thoroughly talk it out with your stylist. Get what you want!"

In response to Fanning, Jones confirmed she was toying with the idea of the bob for a long time. "I couldn’t stop thinking about it!! Had to," Jones responded. "Feels amazing."

Before this hair cut, Jones had shoulder-skimming hair that she often styled into loose waves.

Jones had rocked that same length for over a year, where scrolling through her Instagram shows the same cut as far back as 2017.

In order to create Jones' sleek style, Brager used a specific kind of flat iron. "To create this super sleek bob on January, I used Bio Ionics Graphene MX flatiron. This flat iron brings moisture and health back to hair with every pass," Brager tells Bustle. "Use this flatiron from the roots to ends. Then follow using a comb for perfect placement."

If you have been going back and forth about cutting your hair, let Jones be the push you need to finally give into your urges. The bob is quickly becoming the look of the summer.