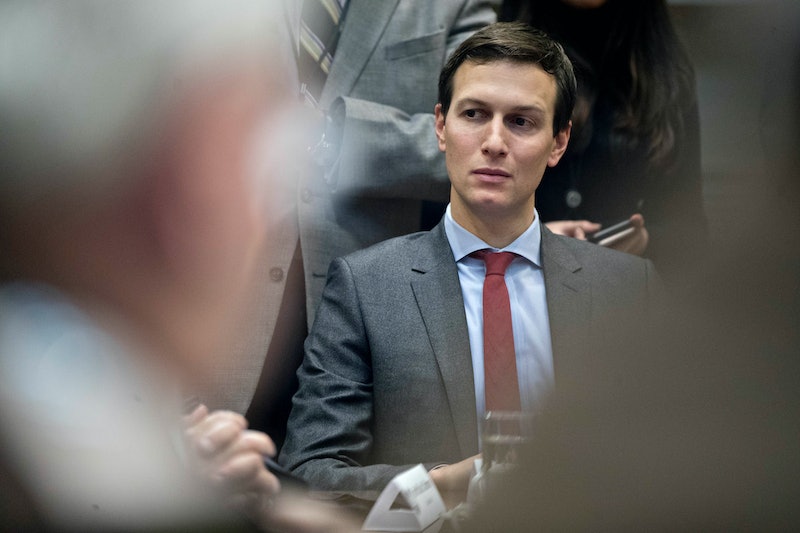 According to The Washington Post, President Trump's son-in-law and top advisor Jared Kushner discussed establishing a secret backchannel to Russia with its ambassador to the U.S. during the presidential transition. The Post reported that Kushner proposed using Russian diplomatic posts in the U.S. as an intermediary through which Trump's transition team could communicate with the Russian government. According to the report, Kushner made the proposal to Sergei Kislyak, the Russian ambassador, who in turn told his superiors in Moscow. Bustle has reached out to the White House for comment on the story.

The meeting between Kushner and Kislyak was originally reported in April by The New York Times; however, that report contained no details of what the two men talked about. The discussion took place at Trump Tower on December 1 or 2, according to the Post, and former National Security Advisor Michael Flynn, who was then a member of Trump's transition team, was reportedly also in attendance. Flynn is currently under FBI investigation, and has been subpoenaed to testify in front of Congress about his communications with the Russian government.

U.S. officials learned of the meeting between Kislyak and Kushner after reviewing intercepted conversations between Russian officials, according to the Post. Kislyak had informed his superiors of Kushner's proposal after the meeting, and was reportedly "taken aback" by it, as the plan would involve an American using sensitive Russian communication equipment at a Russian embassy or consulate.

On Friday evening, the Times also reported that Kushner had proposed a backchannel to Kislyak, adding that the plan was to have Flynn speak to a senior Russian military official about Syria and "other security officials." According to the Times, the backchannel was never established.

The Post said that it was first informed of Kushner's proposal to Kislyak in December through an anonymous letter, but was only able to confirm the allegation with officials recently. Those officials told the Post that, while Kushner understood that it would be risky to meet publicly with members of the Russian government, he felt it was necessary for Trump's transition team to continue communicating with Russia.

The Times report from April alleged that Kushner didn't disclose his meeting with Kislyak when initially applying for top-secret security clearance at the White House, despite being required to disclose all meetings he'd had with foreign government officials over the last seven years. Kushner's lawyer told the Times that the omission was an error.

The FBI is investigating the Trump campaign's ties to the Russian government, and while Kushner is not believed to be a target of the investigation, CNN and the Times both reported Friday that investigators have been looking at his role in the campaign and the transition with increased focus.