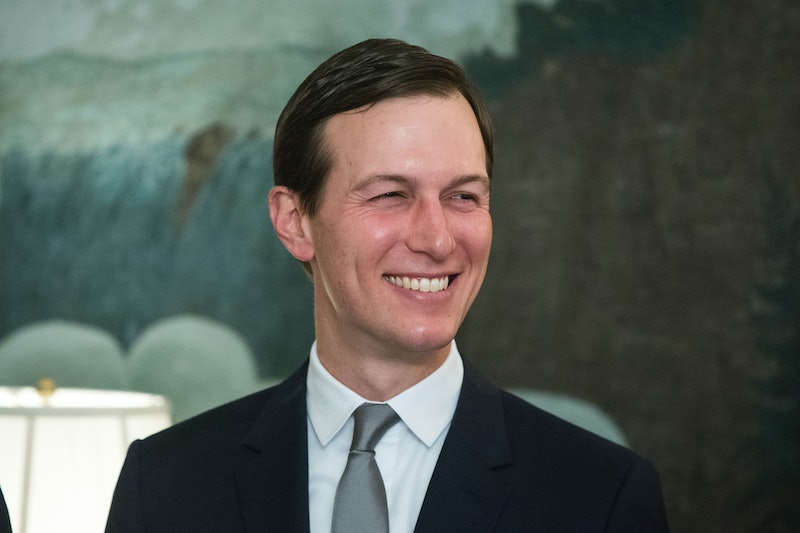 The latest tell-all book about the Trump administration claims that a top Trump advisor wanted to revamp the government, according to a conversation he supposedly had with a senator in 2017. The book, titled The Hill to Die On: The Battle for Congress and the Future of Trump’s America, says Jared Kushner told John McCain he would change how the "entire government" works. The book doesn't detail how Kushner apparently intended to do so, but the authors do maintain that Kushner accused congressional committees of being "inefficient," among other things.

The book was co-written by Politico Playbook writers Jake Sherman and Anna Palmer. Within it, the authors assert that Kushner and other members of Trump's inner circle didn't fully understand the fundamentals of governing. Via Newsweek, an excerpt of the book reads in part,

They’d tipped their hand well before the election during a meeting between top Paul Ryan and Trump aides, when Jared Kushner, the president’s son-in-law, scoffed at Congress’s snail-like pace ... Kushner said congressional committees, which write and examine legislation, were ‘inefficient.’

The authors further assert that Kushner said at one point to Ryan's aides, "We'll get to that," in reference to addressing the perceived inefficiencies of Congress. Additionally, per Newsweek, the authors maintain that Kushner was “giving the impression he wanted to— and believed he could — single-handedly rewrite Congress’s two-hundred-year-old-rules."

Additionally, per an excerpt tweeted by Newsweek politics reporter Jessica Kwong (as seen below), the authors wrote that Kushner spoke about this topic to the late Sen. John McCain in 2017. He allegedly said, "Don't worry, Senator McCain. We're going to change the way the entire government works." Bustle has reached out to the White House for comment.

The Hill to Die On was released on April 9, and it's already a bestseller on Amazon. The summary for the book on the website reads in part,

The startling inside story of Donald Trump's first two years in Washington as viewed from Capitol Hill... Taking readers into secret strategy calls and closed-door meetings from the House to the White House, Politico Playbook writers Jake Sherman and Anna Palmer trace the gamesmanship and the impulsiveness, the dealmaking and the backstabbing, in a blow-by-blow account of the power struggle that roiled Congress.

In an interview with MSNBC on April 8, Sherman and Palmer explained their motivations behind writing the book, and they also acknowledged why the information in their book should still be relevant to readers. Palmer said,

What you see today ... is kind of stunning. You forget, there's so much news happening ... that you kind of look back from election day and you look at these kind of political novices who came into Washington, [like] Jared Kushner, thinking that he was going to upend the entire way that the government operated, and you see them still having a lot of the same mistakes, which is pretty surprising.

Sherman further noted in the interview that the city of Washington, D.C., is not "into change ... into upending structures that have been around for 100 years," but that Kushner "fancied himself as somebody who could tear apart the government and rebuild it in his liking." Sherman continued, "The president likes that. The president likes people who are going to try to complete his missions, try to do things in his image, and I think Kushner was trying to do that, there."

A number of books have been written about the Trump administration in the past few years, as well as about Kushner and his wife, Ivanka Trump, in particular. A number of excerpts have been released from The Hill to Die On, in the last few days (including this excerpt in which Trump supposedly called Paul Ryan a "boy scout"), but to read the story in full you'll have to purchase it.

More like this
Disney+ Has a Nature Docuseries Narrated By Michael B. Jordan
By BDG Studios
Yes, You Can Stream Machine Gun Kelly’s Life In Pink In The UK
By Rachel Mantock
Lauren Rae Is Bringing Back The Sex And The City Vibes In Her New Memoir
By Shahed Ezaydi
Annie Lord’s Memoir Will Make You Believe In Love Again
By Shahed Ezaydi
Get Even More From Bustle — Sign Up For The Newsletter