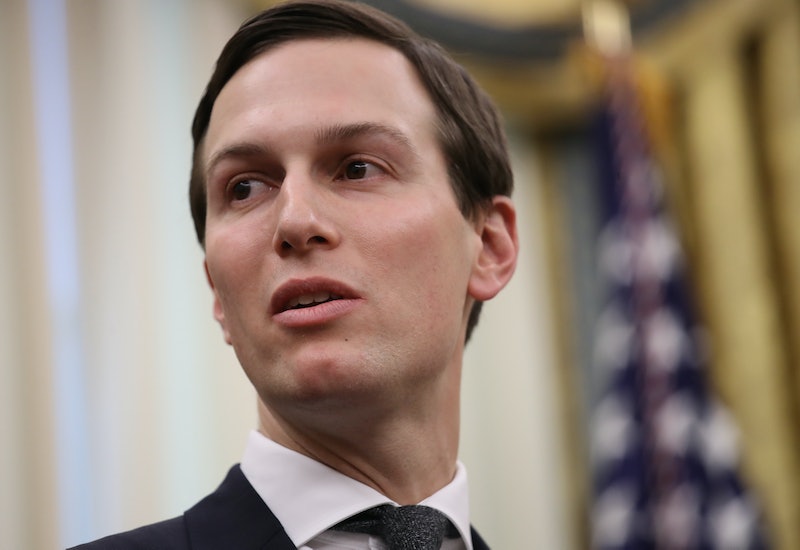 As details of the final negotiations to end the government shutdown come to light, presidential adviser Jared Kushner's role in the shutdown turned out to reportedly be a part of the losing Republican strategy. According to a new report from The Washington Post on Saturday, Kushner said Democratic senators would vote for Trump's plan that included funding a wall at the southern United States border.

Instead, two proposals failed to pass the Senate on Thursday, according to The New York Times. The proposal that included funding a multi-billion border wall had only one Democratic vote from West Virginia Sen. Joe Manchin, CNN reported. (Manchin has supported building a wall on the southern border for a while now, though.)

Despite the Republican failure to secure border wall funding, The Washington Post described Kushner as "the most powerful White House adviser" during the 35-day shutdown. The president's son-in-law also reportedly raised the idea of a new immigration plan, apparently pitching it to Latinx advocacy groups and conservatives in the "Koch network," the newspaper reported.

Trump reportedly blamed Kushner, among others, for the failure to find a solution to the shutdown, according to The Washington Post. The president also reportedly questioned why the Republican Party fractured in comparison to the steadfastness of the Democratic Party. "Why are they always so loyal?" Trump reportedly asked his staff of the Democrats, according to The Washington Post. Bustle has reached out to the White House for comment.

McClatchy reported on Wednesday that several Latinx advocacy groups were invited to meet with Kushner to discuss the border wall and potential protections for DREAMers. Among the invited groups included the League of United Latin American Citizens, Libre Initiative, and the Hispanic Chamber of Commerce, according to McClatchy.

The invitations were met with mixed results. LULAC president Domingo Garcia told McCatchy that it's important to fight for pathways to citizenships for DREAMers, but that they couldn't support building a physical wall. "My goal is to get to the middle ground to end this shutdown," he told McClatchy. But United We Dream deputy executive director Greisa Martinez Rosas was cautious in a statement to McClatchy: "The White House has repeatedly used negotiations over the pain he has caused to immigrants and federal workers to demand billions more for his wall, more detention camps and mass deportation."

Kushner's expanded role in the shutdown negotiations happened as he celebrated the victory of his criminal justice reform passing. He took an interest in immigration as a possible avenue to end the shutdown, The Washington Post reported on Wednesday. "Apparently, Jared has become an expert on immigration in the last 48 hours," Trump said of Kushner at a recent meeting about the government shutdown, according to the Post.

Axios reported on Wednesday that Kushner was leading the negotiations with Congress alongside Vice President Mike Pence. One source told Axios that Kushner was attempting to "find where the market is for the president so he can get his priority while paying something that he can afford to pay for it."

Now, the government remains open until Feb. 15, according to The New York Times. It remains to be seen what Kushner's role will be in this next round of negotiations.