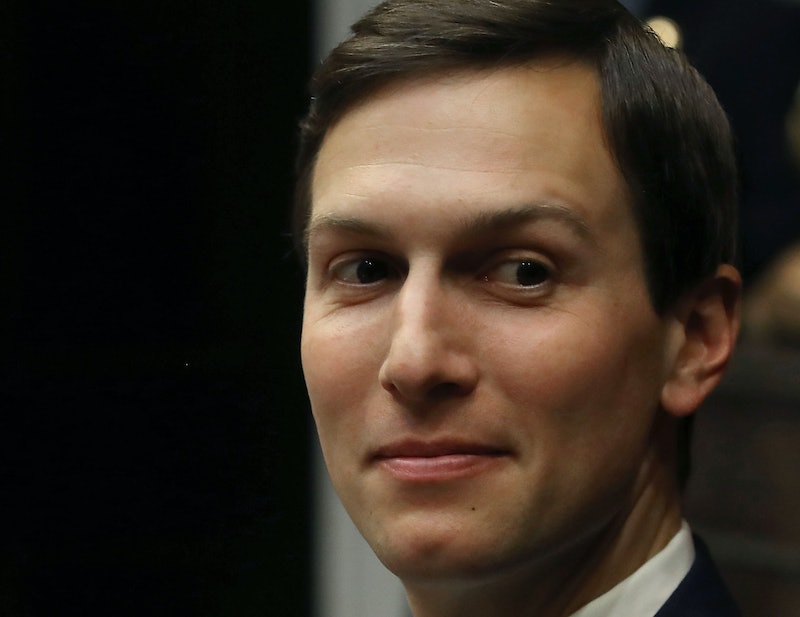 The Orthodox Jewish high school in New Jersey that senior presidential adviser Jared Kushner attended reportedly told students to thank President Trump for deciding to relocated the American embassy in Israel to Jerusalem from Tel Aviv. Rabbi David Sher sent Frisch School students a template email expressing gratitude to the president, and encouraged students who "believe that the president made the right decision" to sign it, according to Haaretz.

"President Trump, you have displayed leadership and strength among the nations by formally recognizing Jerusalem as the eternal capital of the State of Israel," the template letter said, according to Haaretz. "We appreciate your commitment to follow the wishes of the American people and your faithful service as our nation's leader. We are grateful for your unwavering support of Israel, America's greatest ally."

Many parents objected to the letter, with one of them telling Haaretz that it was an attempt by the school to "normalize" Trump's presidency. The school's principal, Rabbi Eli Ciner, soon sent a follow-up email to students clarifying that signing the letter "is entirely voluntary and should be done only if you agree with President Trump.” But in a subsequent email to Haaretz, he defended the decision to send the template letter to students.

"As a religious Zionist school, we encourage our students as civic minded American citizens, to write to the administration when they agree or disagree with the government's policies regarding the State of Israel," Ciner said in a statement to Haaretz. He added that the letter was the result of a joint effort between AISAC, a pro-Israel student group at the school, and NORPAC, a conservative pro-Israel advocacy group.

Parents told Haaretz, however, that it isn't common for the school to ask students to voice their opinions on Trump administration policies.

The international status of Jerusalem has been called "one of the most intractable issues in the Israel-Palestine conflict." Trump's decision to relocate the U.S. embassy to Jerusalem was controversial because it implicitly recognizes the city — which currently houses no embassies — as the capital of Israel. Many Palestinians and other supporters of a two-state solution, however, would like Jerusalem to be the capital of a future Palestinian state.

In a September poll, only 16 percent of Jewish Americans said they support moving the American embassy to Jerusalem immediately. Another 36 percent want the embassy to be relocated "at a later date in conjunction with progress in Israeli-Palestinian peace talks," while 44 percent don't believe the embassy should be moved at all. Hundreds of protesters filled Times Square in New York after Trump announced the decision in December. More than 170 Jewish studies scholars also signed a letter opposing the move, saying that "a declaration from the United States government that appears to endorse sole Jewish proprietorship over Jerusalem adds insult to ongoing injury and is practically guaranteed to fan the flames of violence."

"Jerusalem is of immense religious and thus emotional significance to Jews, Muslims, and Christians alike," the scholars wrote. "It is the focus of national aspirations for both Israelis and Palestinians. We hope one day to see a world in which all inhabitants of the land enjoy equal access to the city’s cultural and material resources. Today, unfortunately, that is not the case."

Kushner graduated from Frisch School in 1999, and since joining the Trump administration, he's been tasked with overseeing America's involvement in the Israeli-Palestinian peace process. Most reports suggest that these peace talks have made no progress under Kushner, with the Daily Beast reporting in August that Israeli officials are "grateful the Trump administration, unlike previous ones, exerts no pressure on them to make major concessions."