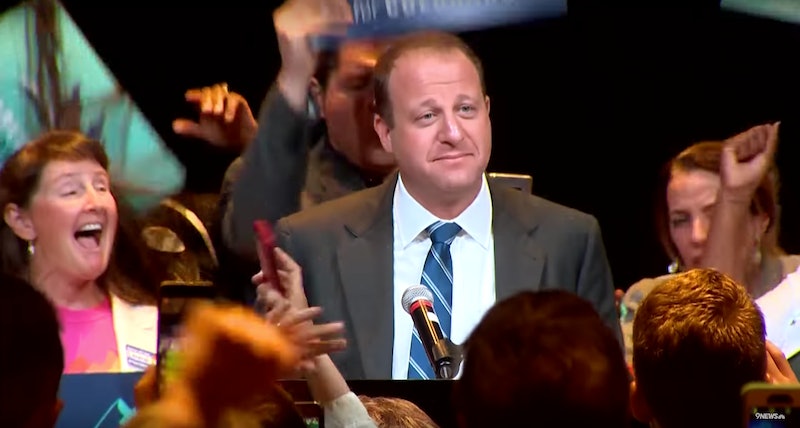 In a stunning victory on Tuesday night, Jared Polis won Colorado's primary election and is now on his way to potentially becoming America's first openly gay male governor. This comes after Polis reportedly spent $11 million of his own money on his campaign trail, running on a platform of Medicare-for-all, and increased access to day-long daycare and kindergarten for all tax-payers. By Tuesday evening, Polis stood at a clear victory, clenching the democratic nomination taking 43 percent of the vote with the next-closest politician only taking in 26 percent.

If Polis wins the gubernatorial election in November, his partner and children will move with him into the governor's mansion, making history. Prior to running for the office of governor, Polis has served five terms as a Congressman for Colorado, according to The Miami Herald. And given that Colorado has not elected a Republican governor since 2007, Polis looks to stand a good chance to make it all the way.

As a self-made millionaire, Polis earned his money through the successful creation of multiple tech companies. He founded his first company, American Information Systems, while still in college, according to Tech Stars. Since then, Polis has placed a growing impetus on developing tech-based solutions to the issue of equal access to education; he's also made that one of his founding issues while campaigning for governor of Colorado.

In addition to his impetus on increased quality of day care and of options for kindergarten, Polis' other issues include an emphasis towards reaching a 100% renewable energy focus for Colorado by 2040, while also working to save money for citizens on their utility bills.

In his campaign ad (as seen below), Polis said, "I'm running for governor to preserve what makes Colorado special, while working to make sure our state works for everyone, not just the few."

Of the possibility that he might make history as the first openly gay governor, Polis was not shy with his words. In a recent speech, Vox reports that Polis said to reporters, “I think it really gives Colorado an opportunity to stick a thumb in the eye of Mike Pence, whose view of America is not as inclusive as where America is today."

According to The New York Times, Colorado has increasingly become a purple state (shifting towards blue from red), making it difficult to predict elections. Currently, it has one million registered Democrats, one million registered Republicans, and 1.2 million unaffiliated voters. The New York Times also notes that the hispanic population is currently a fifth of the population and growing rapidly. All of this culminates to a perfect opportunity for a progressive like Polis, even though he doesn't like to think about his campaigning in a Democrat vs. Republican way.

To The New York Times, Polis said, “I never view it as ‘liberal versus conservative. I view it as a forward versus backward.”

Of his win, Polis' official Twitter said, "What an incredible night! It’s an honor to be the Democratic nominee for Governor of Colorado."

Now, Polis has to take on the Republican nominee for governor, Walker Stapleton. A former state treasurer (and relative of the Bush family, according to The Denver Post), Stapleton is already campaigning aggressively against Polis. On his election night, Stapleton reportedly said, “Make no mistake, as Governor, Jared Polis will raise every tax and fee he can to take more money from hardworking Coloradans."

For now, Polis is considered to have a slightly more favorable chance of being elected governor, according to The Washington Post, given Colorado's recent push towards a more progressive political ideology. The election will inevitably pit voters between an extremely pro-Trump politician and an extremely anti-Trump politician, The Post notes.