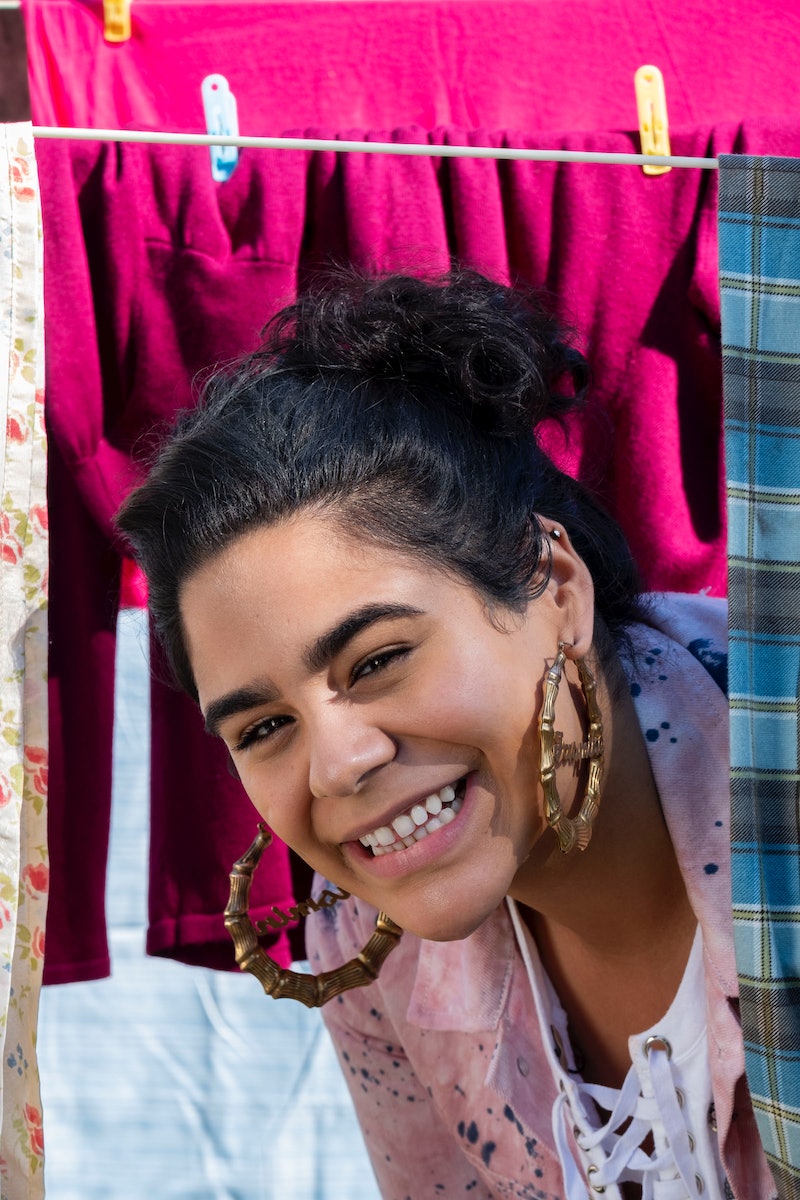 Spoilers for On My Block Season 2 ahead. Throughout the Netflix series' first season, Jasmine Flores charmed fans with her unabashed eagerness to join the core four (Monse, Cesar, Jamal, and Ruby), her hilarious one-liners, and her unflinching confidence. And now, On My Block Season 2 reveals Jasmine's backstory, further exploring the depths of her over-the-top self-assured personality and its origins — which actually came from very personal place for the character's portrayer, Jessica Marie Garcia.

Garcia's Jasmine was a recurring character on On My Block Season 1 and became a series regular in Season 2, but Garcia tells Bustle that she was aware that Jasmine's backstory would have some sadness. In the third episode of Season 2, Ruby (played by Jason Genao) visits Jasmine's home and finds her singing an uplifting song to her unresponsive war veteran father, who has been in a catatonic state since returning from Afghanistan. According to Healthline, PTSD is a common cause of catatonia and, according to the U.S. Department of Veterans Affairs, between 11-20 percent of veterans who served in Operations Iraqi Freedom and Enduring Freedom in Afghanistan have PTSD in a given year.

Jasmine not only reveals her backstory, but creates a bond between herself and Ruby. She sincerely explains to Ruby that yes, she knows she can be annoying, but she's fine with that. Jasmine also reveals that her father's catatonic state made her realize that "the only thing I could actually control was me. So I decided to be happy, because why screw yourself if the universe is just gonna screw you anyway?"

Garcia tells Bustle that it was a very emotional, but therapeutic, scene for her to film. She recalled her own childhood experience living with her grandmother who had dementia. "It would be hard for me to bring friends over because I didn't know how she was going to react to them or interact with them," Garcia says in a phone interview in early March. "So that's a very vulnerable thing to introduce, especially at that age to introduce your friends or anybody to a family member that's suffering from something. Because you just never want to go, you know, you just never want to be that kid that feels even more different."

Jasmine has fully embraced her unique personality — and that's why Garcia feels that the character's backstory makes so much sense. "The class clown is always dealing with the most at home," she says. "And I was the class clown, and I understood that whole, I'm going to make the joke before that joke is me. So I think that that was really helpful when building Jasmine is because you know, people might see her as one thing, but that's definitely not all of who she is."

Fans will get to see another grounded facet to Jasmine's personality as she helps Ruby, who was shot in the Season 1 finale, through his own PTSD. According to a 2012 study published in the Journal of the American Academy of Psychiatry and the Law, the rates of PTSD found in "impoverished, high-risk urban populations within U.S. inner cities" are as high as in war veterans who have returned from war.

For Genao, Ruby's friendship with Jasmine is a key part of his character's healing process. "Ruby had this drastic thing that happened to him and it already happened to Jasmine," Genao tells reporters during an on-set interview in October 2018. "She becomes his like kind of his crutch or someone who can lead the path or help him walk the path of becoming normal or a whole human again after such a tragedy."

While Jasmine has some heartfelt Season 2 scenes with Ruby, she is also still very much the wacky character who charmed viewers in Season 1. During Season 2, Jasmine proudly joins an LAPD youth program, holds a competition to find Ruby a date to a dance, and even heads to Brentwood for a night out. But now, knowing some of her vulnerabilities, her comedic antics take on a whole new meaning.