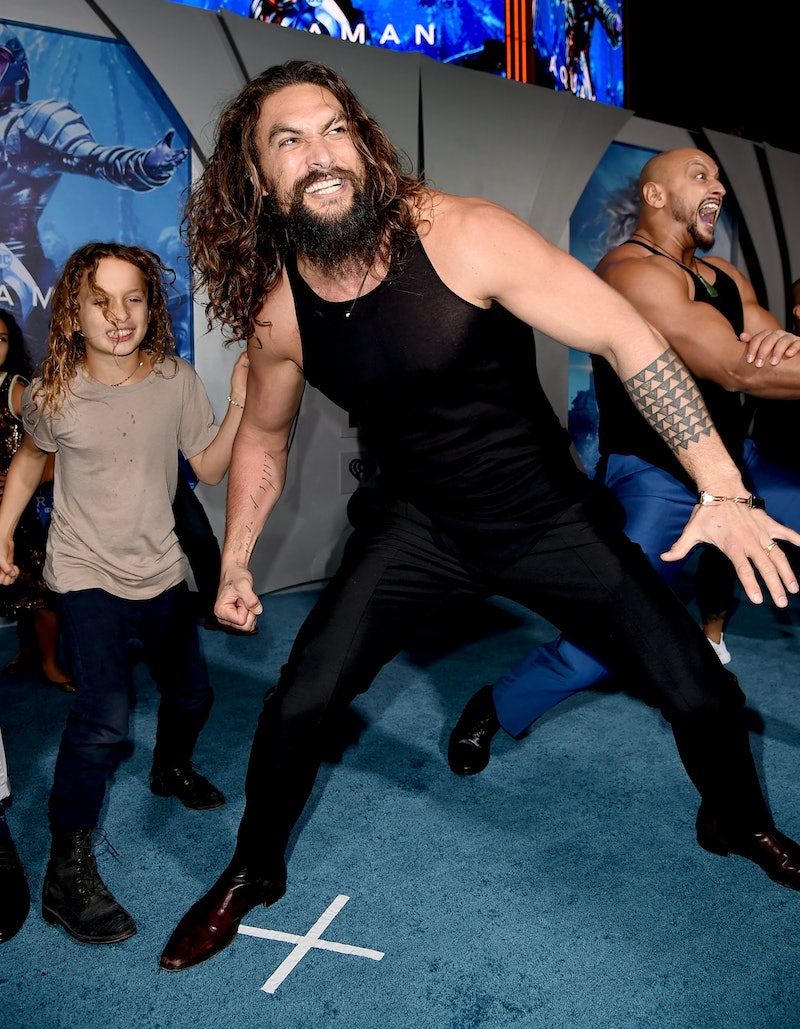 When it was announced that Jason Momoa would be playing the lead role in the upcoming DC Aquaman movie, it was great news for diversity in the entertainment industry. Momoa is half Hawaiian and casting him in a traditionally white role was already pretty darn cool. What's also cool? Jason Momoa led a haka at the Aquaman premiere, making the event not only a great moment for onscreen representation, but also a unique moment that represents a greater shift in Hollywood culture.

The premiere for Aquaman took place in Los Angeles on Dec. 12, and all the major stars of the film were there. Nicole Kidman, Amber Heard, Patrick Wilson, and more took to the blue carpet to promote the new film, in which Momoa reprises his role as Arthur Curry (aka Aquaman). During the blue carpet, Variety captured the moment when Momoa lead a haka, a ceremonial Maori dance traditionally used to challenge or intimidate before a battle, alongside Temuera Morrison, who plays Momoa's father in the film.

Still in his formal attire, Momoa can be seen leading the haka in a video published by Variety. He, as well as some those partaking, took off his suit jackets to perform the traditional dance. As Stuff.co.nz noted, this particular Haka was "Ka Mate," one of the most known haka to non-Maori.

It's really powerful to see Momoa lead the haka at the Aquaman premiere. It very well might be the first time ever that a haka has been performed at the premiere of a major Hollywood blockbuster film. This very visible, very outward celebration of a native culture is beautiful and really hits home how proud Momoa is to be representing his Polynesian heritage in a superhero film. He also expressed this in an interview with Channel NewsAsia. "I just find it hard to believe that there hasn't been a brown-skinned superhero," he said. "It feels really weird to be the first. It's an absolute honor... It's just all the Polynesian Islands and all the neighboring islands just being so stoked that there's a 'Poly' in there. It's really cool."

According to MSN, Momoa echoed these thoughts in a roundtable interview. “There’s just so many brown-skinned kids that are gonna grow up and go, like, ‘Yeah, all of our gods are water gods’. It is an absolute honor... Dream job, you know what I mean?”

At the video from the premiere, Momoa can be seen walking among those performing the haka, trident in hand. What's even cooler is that his two children — Lola Iolani and Nakoa-Wolf Manakauapo Namakaeha Momoa — also took part and did not miss a beat.

This particular one, though, showed what quick learners they are. “They just learned right now," Momoa told Entertainment Tonight after the "Ka Mate." "They've done a lot of hakas. I used to do them when I was little, too, so they knew it and then we just added two together so they already had it down.” He also told ET that this one was "a respect to the god of water.” He added, “It's a very intimate dance about where we find our mana from our ancestors, our mind, our body, our spirit, from our heart.”

If you've ever witnessed the haka, you'll know it's a very moving and powerful thing. Not only is it a visible display of immense power, but it's also moving to see a traditional native dance be performed. For it to have been done at a major movie premiere all the more special.