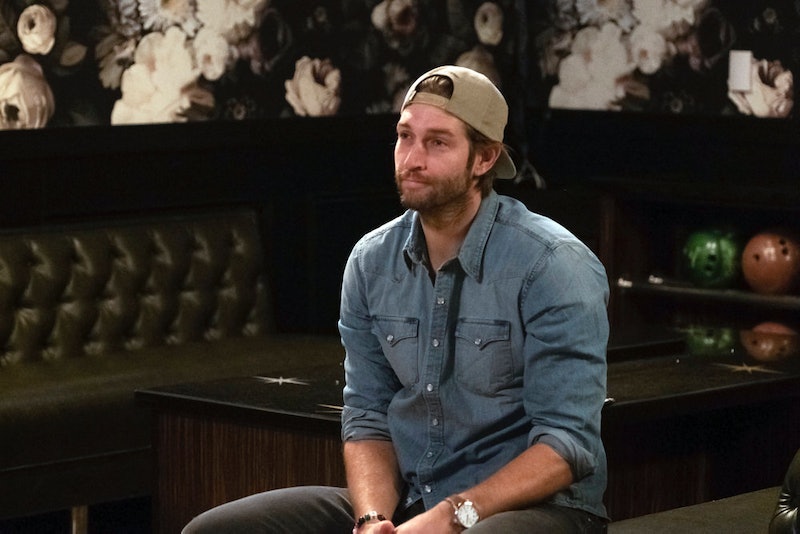 Agreeing to publicly document his post-NFL, stay-at-home-dad lifestyle for reality TV was huge for Jay Cutler, especially considering his known tendency to avoid the press and public eye. (Notice he never joins his wife Kristin Cavallari in Very Cavallari confessionals.) That's why it came as a huge surprise when he agreed to be doubly recorded — he taped an episode of Kelly Henderson's Velvet's Edge podcast while simultaneously filming the April 28 episode of Very Cavallari.

The show caught a few fun clips, but because of the battle for screen time, it only scratched the surface of Jay's interview with Kelly. They talked about his football years, having kids, how his marriage has changed since retirement, and figuring out what he wants to do next.

That being said, he doesn't regret taking time off. After playing in the NFL for 12 seasons, he had forgotten what it was like to be home for the holidays and not have a hectic traveling schedule. He actually took a broadcasting job with Fox Sports prior to his retirement and decided to pull away from it in the end. "I took it but I was kind of torn on it because it was still 16 weeks of travel," he said on the podcast. So, instead, he decided to take a year off "and then see what happens."

Now, he's feeling a little stir crazy. He claimed that his titles as "nanny and house manager," are meeting their expiration dates, and that he wants something to keep him "not as busy as Kristin," but more involved than he is now. He mentioned that "doing the broadcasting thing on more of a half-schedule or something would be interesting," and that he would like to eventually help out at training camps around the NFL.

But that's not all. Some more creative ideas for his future include potentially opening a small-scale butcher shop that sources and sells Tennessee grass-fed meat, or opening up a barber shop. (He cuts his sons' hair and he's pretty proud of that.) But "no matter what I do," he said. "I'm not going to replace football."

Jay and Kelly also touched on how public perception of him has changed since he has evolved from football player to reality star. If you've watched any episode of Very Cavallari at length, you've gotten to know his sarcastic, semi-monotoned approach to life, which ironically, is what many fans love about him — he's funny. But, before cameras followed him around his own home, he didn't have proof of that. So he was often docked as emotionless and careless, according to Kelly.

Jay chocked the negative press up to the decline of newspaper subscriptions and the need to grab readers' attention. "They have to write whatever they can write to get things out there and get people to read it," he said. "Some of it was deserved and some of it wasn't deserved."

Much more was covered on the podcast including Jay's experience with Type I Diabetes and healthy eating, his not-so-secret Instagram account, and the early days of his relationship with Kristin, who was working in the next room during the taping and chimed in a few times.

She joined them as they wrapped up the episode, which is when Jay mentioned that he didn't know about recording with Kelly until the day prior. When Kelly thanked him for coming on the show, he said he "didn't have a choice." He also admitted to hating being a reality star. Ouch.

On that discouraging note — despite hope that Jay may've finally stepped into his own vulnerability, it looks like he won't be coming out of his shell anytime soon. Unless Kristin tells him to. But at least, for now, there's Very Cavallari.