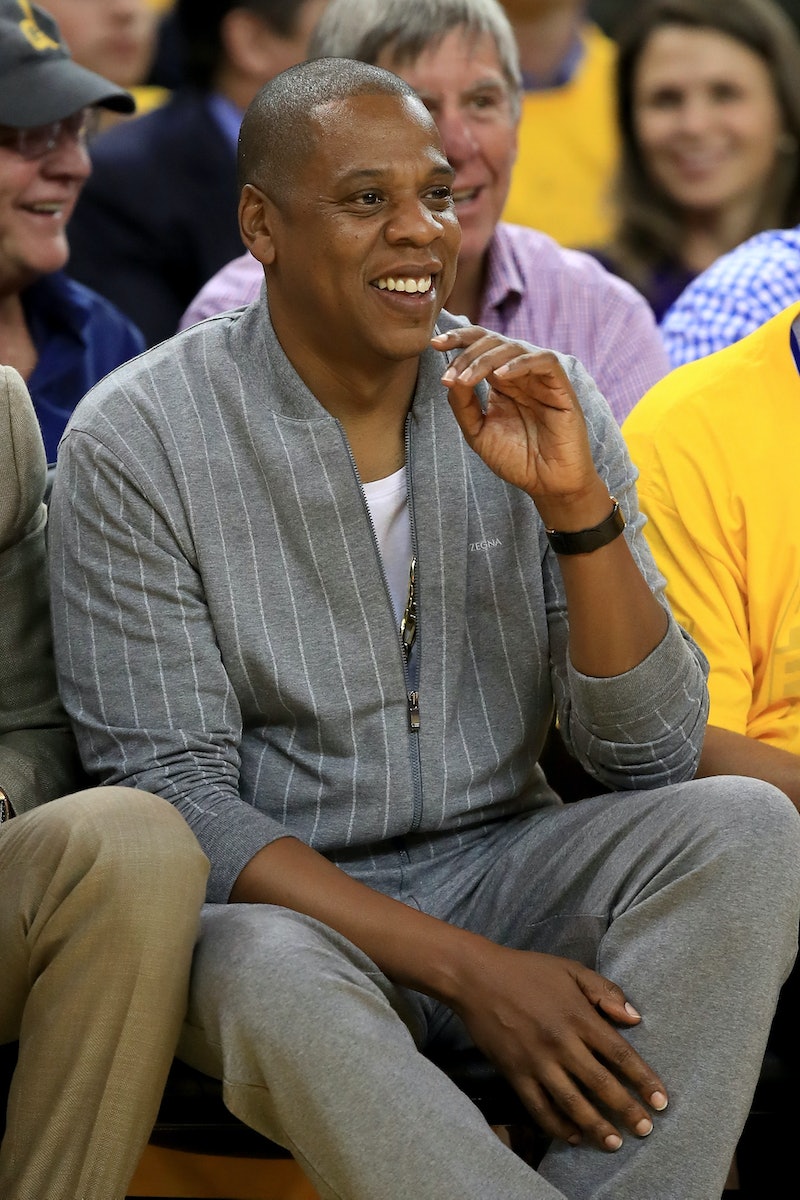 On Sunday, June 18, news broke that Beyoncé's twins were reportedly born. Now, it looks like proud papa JAY-Z is making his first appearance since the twins' birth, as he was spotted by TMZ in West Hollywood on Monday. Best of all, he's all smiles, leaving the Beyhive quite satisfied, but patiently waiting for an official confirmation of the twins' birth. Bustle reached out to the couple's reps for comment, but has not heard back.

We last heard rumor that the twins were reportedly being held at the hospital due to a "minor issue" after sources told TMZ the twins were born last Monday at an LA hospital. The cause and current status of Beyoncé and the twins are unknown at this point, but after a much anticipated breaking story from the family, JAY-Z was spotted in West Hollywood leaving SoulCycle in a hoodie, where, according to TMZ, he frequents to get his fitness in since the birth of Blue Ivy. Considering the star didn't have anything to say to paparazzi, we can unknowingly assume that mama Beyoncé is in good hands with her new bambinos.

Matthew Knowles, father of Beyoncé, took to Twitter on June 18 confirming the birth of the twins leaving us relieved as it pertains to the twins' safe arrival.

Myself and other members of the Beyoncé super-fan club are reading between the lines before there's official word of the twins birth from Beyoncé, herself. As predicted, fans took to Twitter to spill their thoughts about how they're prepping for the Carter family's official announcement.

Some users envisioned incognito visits to the hospital.

And for some fans on Twitter, Joanne memes say more than words ever can.

For now, we'll have to just wait for Ms. or Mr. Carter to come forward about the birth of the twins but the little smile we got from JAY-Z puts us at ease... for at least 24 hours.

More like this
Jake Daniels Just Became The UK’s First Active Football Player To Come Out As Gay Since 1990
By Sam Ramsden
Stormi Just Walked A Red Carpet With Mommy Kylie Jenner & Daddy Travis Scott
By Hugh McIntyre
Twitter Is Upset About The 'American Idol' Top 3 Results: "Who TF Is Voting?"
By Jake Viswanath
Lisa Marie Presley Reviewed Baz Luhrmann’s ‘Elvis’ Movie On Twitter
By Grace Wehniainen
Get Even More From Bustle — Sign Up For The Newsletter