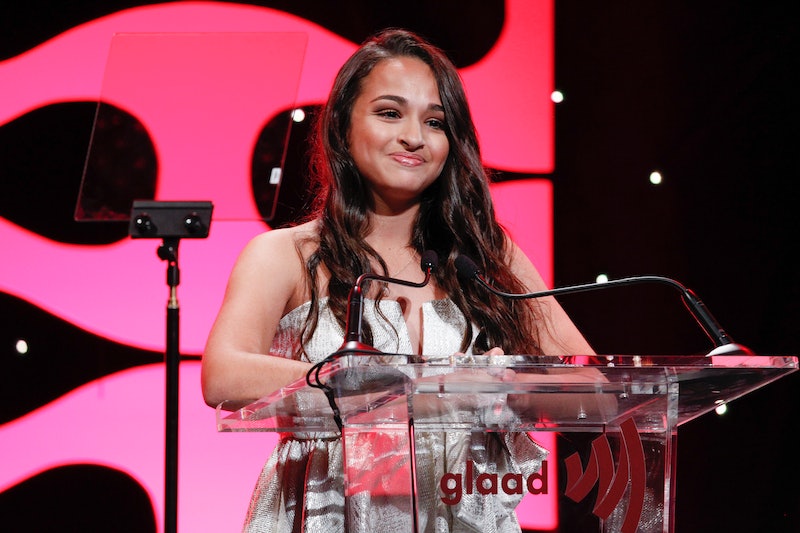 Jazz Jennings hasn't been shy about speaking out against the bathroom bills proliferating throughout different states. Since she earned a national following with her YouTube videos, and later on her TLC show I Am Jazz (its third season premieres on June 28), Jennings has used her fame to advocate for the transgender community. And when it comes to bathroom bills, which force trans people to use the bathroom of their biological gender rather the one they actually identify with, Jennings has shared her own school bathroom experience to challenge trans discrimination.

For years, Jazz has spoken about why it's so important for transgender people, especially transgender youth, to use the bathrooms of their choice. She even tackled bathroom bills head-on in her show in the second season, talking to another trans activist about North Carolina House Bill 2 (HB2) — the law that forced transgender people to use public bathrooms that matched their biological gender. (HB2 was repealed this past March, but replaced with a new law that prohibits local government from enacting laws that protect LGBTQ people.)

In an interview with Bustle at the Human Rights Campaign's Time to THRIVE conference for LGBTQ youth, held in Washington D.C. last month, 16-year-old Jennings explains her own personal, negative experience of being barred from using the bathroom that matched her gender identity. "Throughout elementary school, for five years, I wasn't allowed to use the girls' bathroom," she says. "They designated a special nursery bathroom for me in the nurse’s office. I didn't want to go there because kids were like, 'Why are you using this separate bathroom?' And in the nurse's office, people were throwing up and sick, and I was like 'I don't want to go there.'"

However, Jennings also speaks about how important it is to remember so many other issues are facing the trans community. "There's obviously so much more to us as people rather than just going to the bathroom," she says.

"It really is a life-changing operation that I think should be included but it just isn't."

Specifically, she cites the problems that some trans people have had with getting insurance companies to cover various medical procedures that are part of the transitioning process, like taking hormone blockers. "When it comes to medical care and insurance, a lot of LGBTQ people are denied medical access," Jennings says.

And as with being denied access to the bathroom of her choice, Jazz says she has personal experience with this issue, as well.

"If the country and the president are not on our side, then who is? It creates feelings of fear."

"When it comes to insurance, we struggled with that. We had an insurance that didn't really cover all of the operations," Jennings says. "They [insurance companies] basically say they aren't vital." However, she points out, "It really is a life-changing operation that I think should be included, but it just isn't."

Having medical coverage for these surgeries and treatments is especially important for trans youth, Jennings argues. "I don’t think they [insurance companies] realize that if transgender kids out there aren't getting the blockers to block testosterone or block estrogen, either way male-to-female or female-to-male, it really does lead to thoughts of suicide," she says. "Going through puberty of the opposite gender is the worst thing ever."

"Going through puberty of the opposite gender is the worst thing ever."

Still, she understands why the bathroom issue dominates the national spotlight, especially since the Trump administration rescinded protections for transgender students in public school to use the bathrooms of their choice that the Obama administration put in place last year. "It kind of empowers the haters," she says. "We fear for our protection and safety. If the country and the president are not on our side, then who is? It creates feelings of fear."

However, even though she knows the LGBTQ community has challenges to overcome, Jennings is confident that they will persevere: "We are definitely going to be treated equally one day, if we keep fighting and we keep representing ourselves."