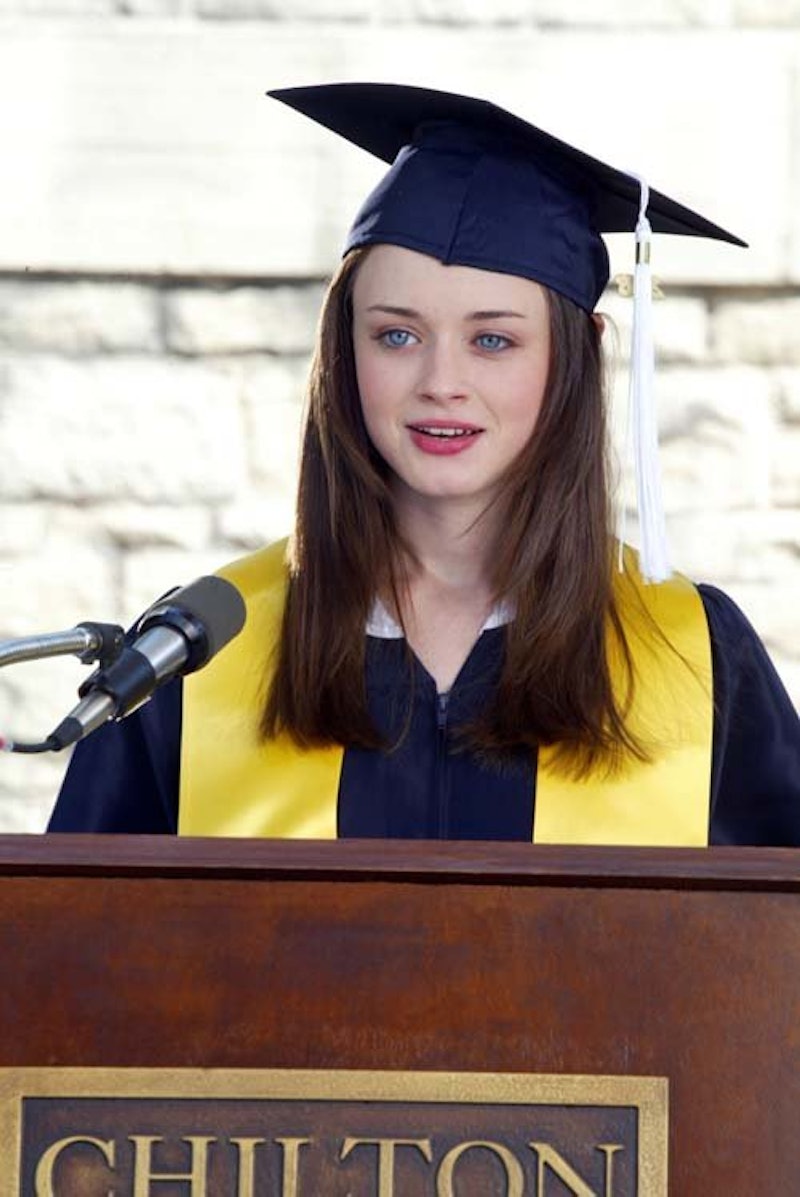 Courtesy of Warner Bros. Television
By Lily Feinn
May 24, 2017

In the sacred words of Beyoncé: "Who run the world?" Apparently, not high school valedictorian boys or girls. According to research by Boston College professor Karen Arnold, when it comes to measuring the long-term success of high school valedictorians, busting your butt academically is not predictive of reaching the pinnacle of affluence in the real world. Are the students who maintain high GPAs reliable and hard working? Certainly. Will they grow up to be ground breakers and visionaries with a prime spot on Shark Tank? Probably not.

To see if doing well in school spelled out career success down the road, researcher Karen Arnold followed the lives of 81 high school valedictorians for 14 years after they hung up their cap and gowns. The study, which is detailed in Arnold's 1995 book Lives of Promise: What Becomes of High School Valedictorians, showed that high school success predicted college success, but neither paved the way for a meteoric rise once the diplomas were doled out. Ninety-five percent of her valedictorian subjects graduated college with an average GPA of 3.6, and 60 percent went on to receive further degrees. Most of her subjects did not veer from the traditional course and 90 percent went on to have impressive professional careers working as accountants, lawyers, engineers, teachers, physical therapists, and physicians (and one poet!). The valedictorians continued to be "strong occupational achievers" with well-adjusted personal lives, but do not expect to find them on the cover of Forbes. “They get school,” Arnold told The BC Heights. “While they’re not entrepreneurs or mold-breakers, valedictorians continue on to succeed in mainstream institutions.”

We have, in fact, already seen this trend play out in TV's Gilmore Girls, where famous fictional high school valedictorian, Rory, goes on to study at Yale and lead the school paper, but when it comes to taking the world of journalism by storm, (*spoiler alert*), things fall a little flat. So what is stopping these A-earning students from making their mark in a bigger way? Time Money believes the skills you need to succeed academically may actually train you to blend-in rather than stand out. "Schools reward students who consistently do what they are told. Academic grades correlate only loosely with intelligence (standardized tests are better at measuring IQ)," notes Time, but it's not all bad news. "Grades are, however, an excellent predictor of self-discipline, conscientiousness, and the ability to comply with rules."

Where some students may have one interest that they hope to master, the valedictorian must pay attention to all subjects in order to maintain their high GPA. Those who choose to follow their passions, and struggle a bit in high school, may actually be better prepared for specializations required in the professional world.

"They're extremely well rounded and successful, personally and professionally," Arnold said in an interview with the BC Chronicle, "but they've never been devoted to a single area in which they put all their passion. That is not usually a recipe for eminence. The opportunities to become famous or change the world as an accountant, for example, are few and far between." While this research doesn't mean you should stop studying for finals and pick up the violin, it's good to keep in mind that rules are made to be broken.