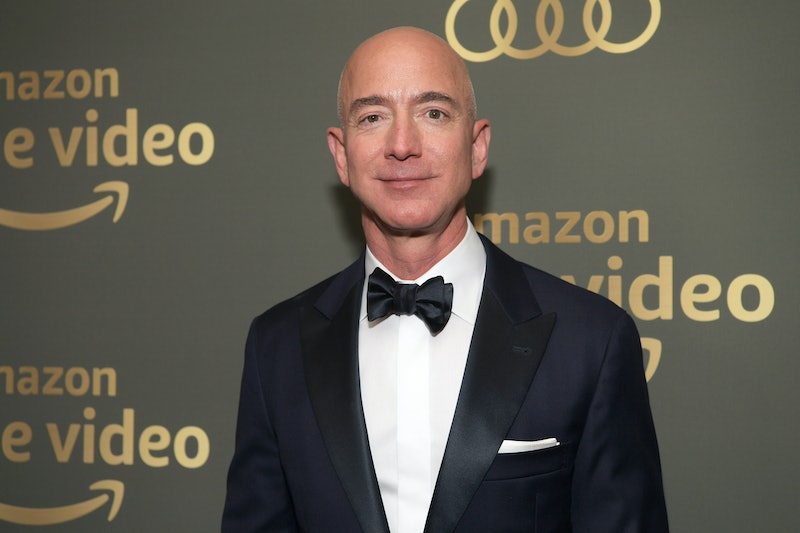 On Thursday evening, in a bombshell self-published post on Medium, Jeff Bezos accused the National Enquirer of blackmailing him with nude photos. Specifically, Bezos claimed that American Media Inc. (AMI), the parent company of the National Enquirer, was "blackmailing" him after he launched an investigation into a recent article by the publication that revealed intimate details about his personal life with his reported girlfriend. Bustle has reached out to Jon Fine, the general counsel of AMI, for comment.

UPDATE: AMI says in a statement Friday morning that it is investigating the matter.

"American Media believes fervently that it acted lawfully in the reporting of the story of Mr. Bezos. Further, at the time of the recent allegations made by Mr. Bezos, it was in good faith negotiations to resolve all matters with him," the statement reads. "Nonetheless, in light of the nature of the allegations published by Mr. Bezos, the Board has convened and determined that it should promptly and thoroughly investigate the claims. Upon completion of that investigation, the Board will take whatever appropriate action is necessary."

Something unusual happened to me yesterday. Actually, for me it wasn't just unusual  —  it was a first. I was made an offer I couldn't refuse. Or at least that's what the top people at the National Enquirer thought. I'm glad they thought that, because it emboldened them to put it all in writing. Rather than capitulate to extortion and blackmail, I've decided to publish exactly what they sent me, despite the personal cost and embarrassment they threaten.

Bezos included a series of communications from Fine, in which a number of nude photos were described in explicit detail. For example: "A naked selfie in a bathroom — while wearing his wedding ring. Mr. Bezos is wearing nothing but a white towel — and the top of his pubic region can be seen."

However, Bezos made it clear that he was not going to let a handful of pictures of his naked body lead to what he called "extortion." He also pointed out an extremely important point, as the resident wealthiest man on earth: "If in my position I can’t stand up to this kind of extortion, how many people can?"

Of course I don’t want personal photos published, but I also won’t participate in their well-known practice of blackmail, political favors, political attacks, and corruption. I prefer to stand up, roll this log over, and see what crawls out.

Bezos further pointed out that the attack might be politically motivated, given Bezos' ownership of the Washington Post and AMI's supposed relationship to Trump. However, the National Enquirer strongly disputes this. Bezos included AMI's rejection of that claim: “American Media emphatically rejects any assertion that its reporting was instigated, dictated or influenced in any manner by external forces, political or otherwise.”

Additionally, in another email the Amazon CEO shared, Fine made it clear he didn't agree with how Bezos was portraying the National Enquirer.

Accordingly, we hereby demand that you cease and desist such defamatory conduct immediately. Any further dissemination of these false, vicious, speculative and unsubstantiated statements is done at your client’s peril.

After Bezos launched an investigation into that matter, he claims, he began to receive the emails that are detailed in the communications he posted: namely, that the National Enquirer would continue to post private text messages and photos unless he "[publicly affirmed] that [he and his lawyer] have no knowledge or basis for suggesting that AM’s coverage was politically motivated or influenced by political forces."

Bezos has clearly refused to do so.