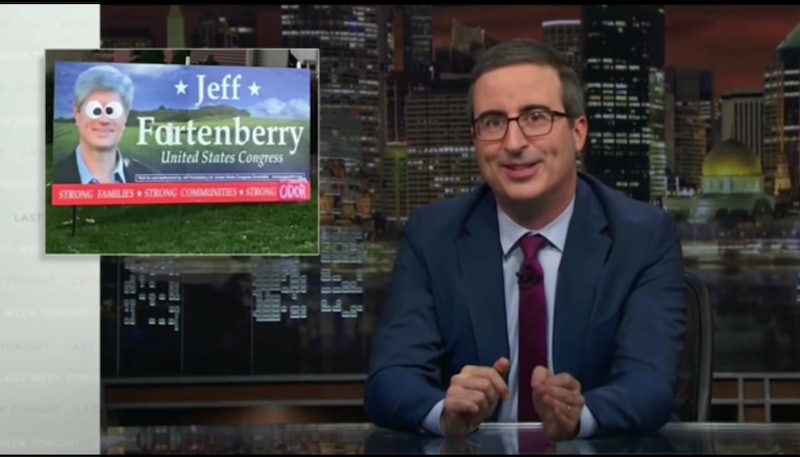 On Sunday's episode of Last Week Tonight, the show's host took a lighthearted look at the entertaining controversy behind a doctored congressional campaign sign. Indeed, Jeff Fortenberry's campaign sign made John Oliver feel "grateful" for the "glorious silliness" brought about by the incident, which the host welcomed amidst otherwise intensive midterms news.

Fortenberry is the current representative for Nebraska's first congressional district. As Oliver explained, recently, someone acquired one of Fortenberry's campaign signs and placed "googly eyes" over the image of his face. This person also changed Fortenberry's name to "Fartenberry" on the same sign and altered the sign's slogan to say, “Strong Families, Strong Communities, Strong Odor.” The sign made its way around the internet and received some attention on social media, including from Professor Ari Kohen of the University of Nebraska-Lincoln.

As Oliver explained, Kohen simply liked a photograph of the sign on Facebook. Fortenberry's chief of staff, William “Reyn” Archer, was apparently displeased by Kohen's action and called the professor to express this discontent. Kohen recorded this phone call and Oliver played a portion of it on his show. In the call, Archer accused Kohen of liking something that supposedly equates to "vandalism" and then asked Kohen, "if someone were liking a photo with blackface, would that be acceptable?"

The late night host appeared confounded by the chief of staff's line of questioning and then responded, "Wait, I think I actually know the answer to that question. No, blackface is not acceptable." He then joked, "Oh god, I just won. I won. I'm replacing Megyn Kelly on the Today Show. That's all it took. What an incredibly easy standard to meet." Oliver's joke referenced Kelly's recent ouster from NBC, which occurred after she made offensive remarks about blackface Halloween costumes.

The host then continued to mock Archer's assertions, saying:

The comedian wrapped up his piece by playing another snippet of the call between Kohen and Archer. In this portion of the call, Archer suggested that Fortenberry's campaign could publicly call out Kohen for "liking vandalism." In response, Kohen told Archer that he thought this would be a "terrible idea" for the campaign, because "the optics of this are terrible."

Oliver readily agreed with Kohen's assessment, saying, "Yes, they are. They are. If you are arguing that it's wrong for anyone to like 'Jeff Fartenberry,' I just don't think you're gonna find a groundswell of public support for this decision." The host also pointed out that, in an election season seemingly dominated by controversy and intensity, "this [the doctored campaign sign] might actually be the best optics that you can possibly hope for." Clearly, Oliver sees the Fortenberry sign controversy as a welcome respite from the otherwise quite serious nature of the midterm campaign season.

More like this
'Waterloo Road' Is Back, With More Than A Few Familiar Faces
By Sam Ramsden and Vivian Iroanya
Matt Hancock Broke a Major Rule With I’m A Celeb
By El Hunt
What To Know About Martin Bashir After Watching 'The Crown'
By Bustle UK
How Is The British Royal Family Related To The Romanovs?
By Karen Fratti
Get Even More From Bustle — Sign Up For The Newsletter