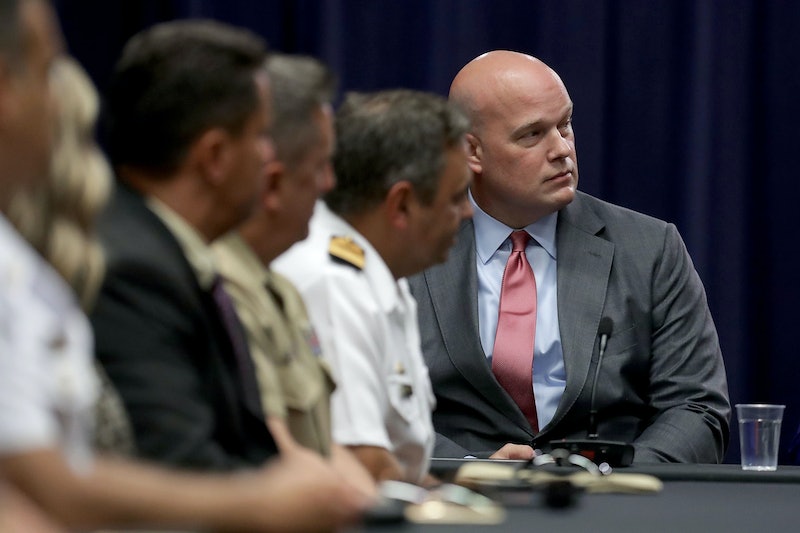 Just hours after the 2018 midterm elections wrapped up, POTUS made a stunning announcement on Wednesday: the Attorney General was resigning. Jeff Sessions' temporary replacement Matt Whitaker has generated concern over his newfound takeover of Robert Mueller's Russia investigation, as he has criticized the probe in the past. But it's not just Whitaker's bias of the Russia probe that has people scratching their heads — he also has had a pretty robust Twitter presence throughout the last several years.

A majority of the tweets on Whitaker's official account are related to the University of Iowa, of which he is an alum. Still others are more bizarre, such as his tweet about his new law firm finally getting Wi-Fi so that he didn't "need to hijack Taco John's free wi fi [sic] any more." In yet another tweet, Whitaker asserted that Dave Matthews is "the Jimmy Buffett of our time." And in perhaps the most surprising tweet yet, Whitaker tweeted out a series of cat memes to illustrate hurricane intensity, as seen below.

But other tweets from Whitaker seem to have been more politically charged, though it's unclear whether he was writing in jest or sincerely. In one August 2017 tweet, Whitaker wrote, "Is the #Borderwall going to be similar to #thewall on #GoT ? If so, where is #eastwatch ?"

During his Senate run, Whitaker told an Iowan radio station that he sought to emulate staunch conservative senators like Ted Cruz and Rand Paul.

Whitaker also claimed at a Republican forum during his Senate run that he didn't trust judges who didn't believe in an afterlife. Specifically, Whitaker explained that when selecting a federal judge, he would want to know that they have a "Biblical view of justice."

"As long as they have that world view," he said, "they'll be a good judge. If they have a secular world view, where this is all we have here on earth, then I'm going to be very concerned with how they judge."

As acting attorney general, Whitaker will now have full oversight of Mueller's Russia investigation, until Trump finds a permanent replacement for the role. He will additionally function as the head of the Department of Justice, and will also technically be the chief lawyer for the United States government.