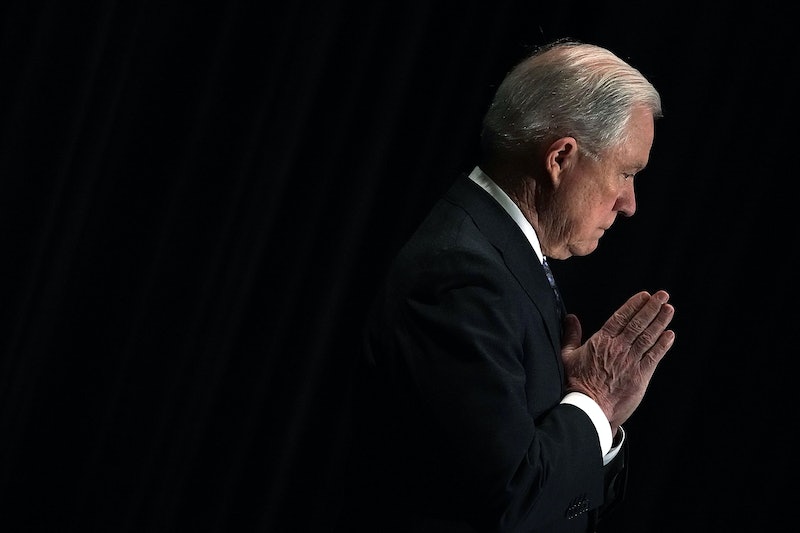 There's been quite a bit of backlash over Jeff Sessions' use of the Bible to defend the Trump administration's controversial policy of separating migrant families caught entering the country illegally. But perhaps the most significant condemnation of Sessions' biblical justification is the one coming from the attorney general's own church.

The United Methodist Church, of which the attorney general is a member, slammed Session's use of the bible to defend Trump's "zero tolerance" immigration policy in a statement Friday. The church explicitly called on Sessions to "immediately reverse" the policy.

"To argue that these policies are consistent with Christian teaching is unsound, a flawed interpretation, and a shocking violation of the spirit of the Gospel," Rev. Dr. Susan Henry-Crowe, general secretary of The United Methodist Church, said in the lengthy statement. "Christian sacred texts should never be used to justify policies that oppress or harm children and families."

Henry-Crowe condemned the Trump administration's policies of separating children from their parents when families are caught crossing the border, as well as the order to deny asylum requests from victims of domestic abuse and gang violence. She went on to urge members of the church to contact both the Justice Department and Sessions — who the reverend referred to as "our fellow United Methodist" — to demand they "immediately reverse" those policies.

"The Trump Administration implemented these policies," she wrote. "They have the power to stop these horrific actions."

Sessions invoked the Bible as a means of defending the Trump administration's immigration policies while speaking to law enforcement members in Fort Wayne, Indiana, on Thursday. "I would cite you to the Apostle Paul and his clear and wise command in Romans 13, to obey the laws of the government because God has ordained them for the purpose of order," Sessions said. "Orderly and lawful processes are good in themselves and protect the weak and lawful."

The Council of Bishops of The United Methodist Church issued their own statement urging Sessions and the Trump administration "to stop its policy of separating immigrant families." The bishops said they were "deeply disappointed and pained" to hear of the policy. "Tearing children away from parents who have made a dangerous journey to provide a safe and sufficient life for them is unnecessarily cruel and detrimental to the well-being of parents and children," they said in a statement. "The security of the family provides critical mental, physical and emotional support to the development and wellbeing of children."

But leaders from The United Methodist Church aren't the only religious leaders to have pushed back on Sessions for using the Bible to justify the Trump administration's "zero tolerance" stance on immigration. The Catholic Church's Archbishop of New York, Cardinal Timothy Dolan, told CNN there was no biblical defense for taking children away from their parents.

"I don't think we should obey a law that goes against what God intends," Dolan said during an appearance on CNN's Cuomo Prime Time. "That you would take a baby, a child, from his or her mom —I mean, that's just unjust. That's unbiblical. That's un-American. There could be no Bible passage that would justify that."