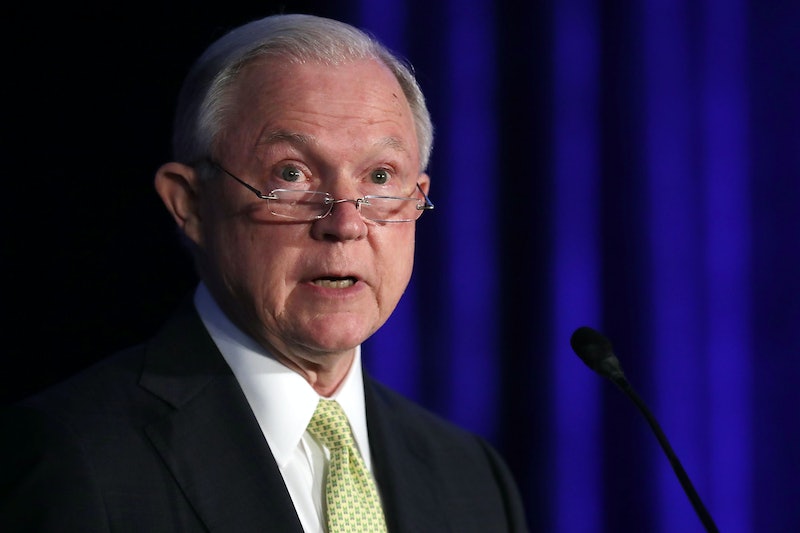 To put it mildly, President Donald Trump's administration is aware that the black community is not totally with them — meanwhile, distrust of police officers is also high. In fact, in a speech to the National Organization for Black Law Enforcement in Atlanta on Tuesday, Jeff Sessions cited a poll that said just 30 percent of black Americans trust law enforcement.

But rather than take into consideration NOBLE's ideas on how to further police-community relations during his speech, Sessions asked black officers to be law enforcement "ambassadors" of Trump's policing policy.

On Friday, Trump told a group of Long Island police officers, assembled at a local community college, not to go out of their way to be gentle to MS-13 gang members when arresting them.

When you see these towns and when you see these thugs being thrown into the back of a paddy wagon — you just see them thrown in, rough — I said please don't be too nice ... Like when you put somebody in the car and you are protecting their head, you know? The way you put your hand over ... like don't hit their head and they've just killed somebody, don't hit their head, I said, "You can take the hand away, O.K."

The Suffolk County Police Department later released a statement saying, "we do not and will not tolerate roughing up prisoners." However, Sessions told NOBLE that Trump's comments were just a joke.

According to ThinkProgress, NOBLE has spoken up for reevaluating police-training tactics and use-of-force policies, which Sessions has refused to acknowledge as an issue.

Instead, Sessions spent the speech deriding the few officers who are the bad apples of the bunch, but also took to task mayors of cities that have experienced police brutality and "run down police" who are involved in deadly force cases. He told officers that aggressive federal investigations into police departments can undermine a police force's efficiency, and therefore needed to be avoided. According to CBS News, Sessions all but came out and said that he won't go after departments for mandatory improvement plans.

To Sessions, the number one priority is cutting down on drug use. In May, Sessions ordered prosecutors to go after the highest charges in drug cases. And he once again repeated this objective to NOBLE.

After the Minneapolis cop who killed Philando Castile was acquitted in June, NOBLE said in a statement:

We acknowledge the continued need for ongoing police accountability measures that restrict overzealous use of force fully recognizing the often discriminate toll minority communities have faced. To move forward in building policy measures that focus on ensuring the rights of all citizens, we must work together with the community, law enforcement, and elected officials.

However, Sessions seems to have some different opinions and ideas about how police need to work with communities.