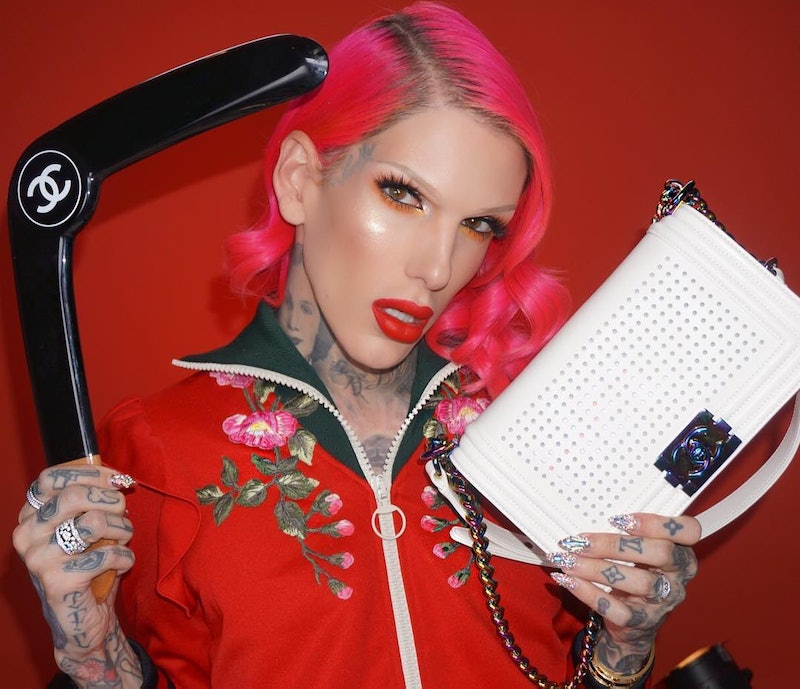 Jeffree Star has always been a brand owner and beauty guru who is honest with his fans. That's partially why he's never partnered with a brand to get an affiliate code. Now, though, Jouer and Jeffree Star's affiliate code earnings will go toward helping the Los Angeles LGBTQ Center, and it proves that Star wants to use his influence for good.

Star has teamed up with popular indie brand Jouer Cosmetics to offer an affiliate coupon code to his subscribers. Fans who use Star's code will receive 15 percent off their purchase at Jouer. While most affiliate code profits result in a commission for the vloggers, that's not the case with Star's code. Instead, the Jeffree Star Cosmetics owner and talented makeup artist will be donating all proceeds to the Los Angeles LGBT Center.

Star openly admits to always wanting to be honest with his subscribers, and until this point, he has shied away from embracing codes. By avoiding codes, Star explains in his May Holy Grails and Fails video it helps his subscribers understand that he does not review or discuss brands specifically for money. It's a charge that has been leveled at a multitude of beauty vloggers and has resulted in an entire genre of videos on YouTube dedicated to criticizing gurus.

Many beauty Youtubers and bloggers have been criticized extensively — and sometimes unfairly — for their use of codes. The codes are used to not only help gurus' subscribers save money on products the vloggers may love, but they also typically include a commission for the YouTuber. The main criticism comes from the idea that vloggers may be touting sub-standard products in order to make money or that affiliate links used in their description boxes are not adequately explained or disclaimed to subscribers. While these criticisms should be heard, for the vast majority of beauty vloggers, affiliate codes only help support their content, and their videos almost always feature disclaimers that links and codes are affiliate links.

Jeffree Star, however, has been fully avoiding those controversies for some time by featuring no affiliate links or codes on his channel. That, however, is changing now, but for an incredible cause.

The Los Angeles LGBT Center provides "health, social services and housing, culture and education, leadership and advocacy" both in Los Angeles and globally to LGBT people. In fact, they serve "more people than any other organization in the world." The organization strives to not only help the LGBT community through advocacy but helps fight bigotry and discrimination daily.

If you want to do a bit of shopping and support an incredible organization, head over to Jouer's site now and use Star's "JSTAR" code to save money and benefit an incredible cause. With 100 percent of the proceeds from the code going to the Los Angeles LGBT Center, you've got nothing to lose.