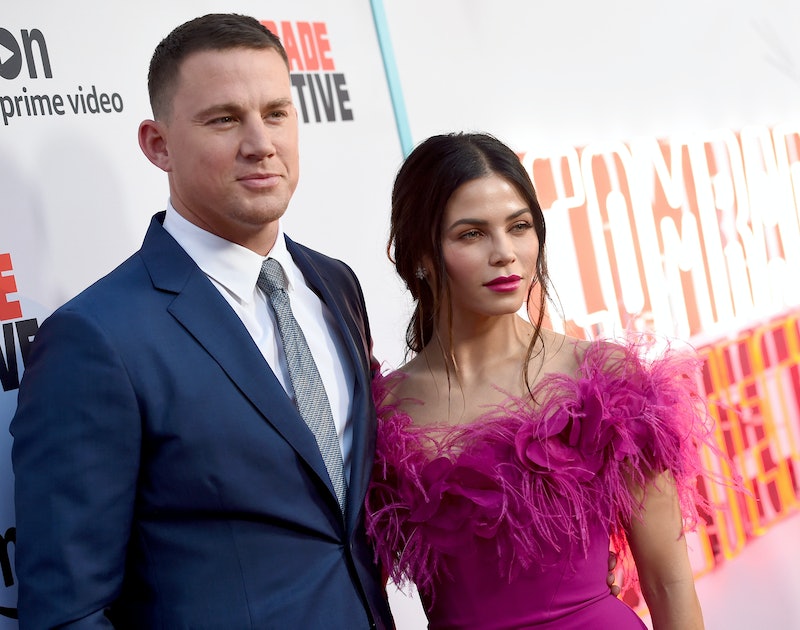 It's a very sad day, you guys. Jenna Dewan and Channing Tatum's dog Lulu passed away, as E! News reported on Dec. 19, and both stars posted touching tributes to their pet that will totally tug at your heart strings. Their tributes might also cause you to shed some tears, so if you didn't wear waterproof mascara, proceed with caution.

Look, everyone knows that pets — like humans — don't live forever. Don't you think they should at least live as long as their owners do, though? Can someone out there get to work on that? Lengthening pets' lives? Losing a four-legged friend is almost too much to bear.

Dewan and Tatum both mourned the loss of Lulu in separate, yet equally touching posts on their respective Instagram pages. The former couple had shared the pup since 2008, and it's clear that she's always remained a major part of their family.

Dewan posted a ton of her favorite photos of Lulu, including a few with her and Tatum's daughter Everly. There's one of Lulu as a teeny-tiny baby — like, so teeny-tiny she could have probably fit in the palm of your hand at the time — one of her sitting in Dewan's lap while on set, and a short video where Lulu is giving her momma some serious love with lots and lots of kisses.

The 38-year-old star penned a heartfelt ode to her furry friend with an Instagram caption that read,

"To our sweet and fierce Lulu...thank you for being the best dog in the entire world and for fighting cancer for as long as you did. Thank you for your tireless love, protection and humor. Thank you for the adventures. Heartbroken doesn’t even come close to how it feels. But you will live on forever in our hearts and our memories...fly sweet angel."

Oh man, the poor pooch had cancer. That is so sad. At least she's no longer in pain, though. Where are the tissues? Can we please get some tissues over here?

Tatum's Instagram tribute revolved around a single, black-and-white photo of him and Lulu. The pair appear to be mid-sprint while racing through some shallow waves, and the adoration in Tatum's eyes says it all. "I’ll see you again baby girl," the actor captioned the photo. "But you’ll always be with me. Always. Thank you Norman jean Roy for this memory."

Welp, here come the waterworks. According to an interview Dewan did with People back in April 2017, Lulu and Tatum were practically twins. "Lulu is like a fur Chan," she told the publication. She continued,

"They are the same person. She’s wild, she loves adventure, she’s always like, 'Where are we going? What are we doing?' She’s a big baby, but she’s kind of vicious and also just ready to go all the time."

Losing a pet can be impossibly painful, but it sounds like Lulu lived a long, good life and was very well-loved. Perhaps Tatum and Dewan can find some solace in knowing that now she's onto her next great adventure.