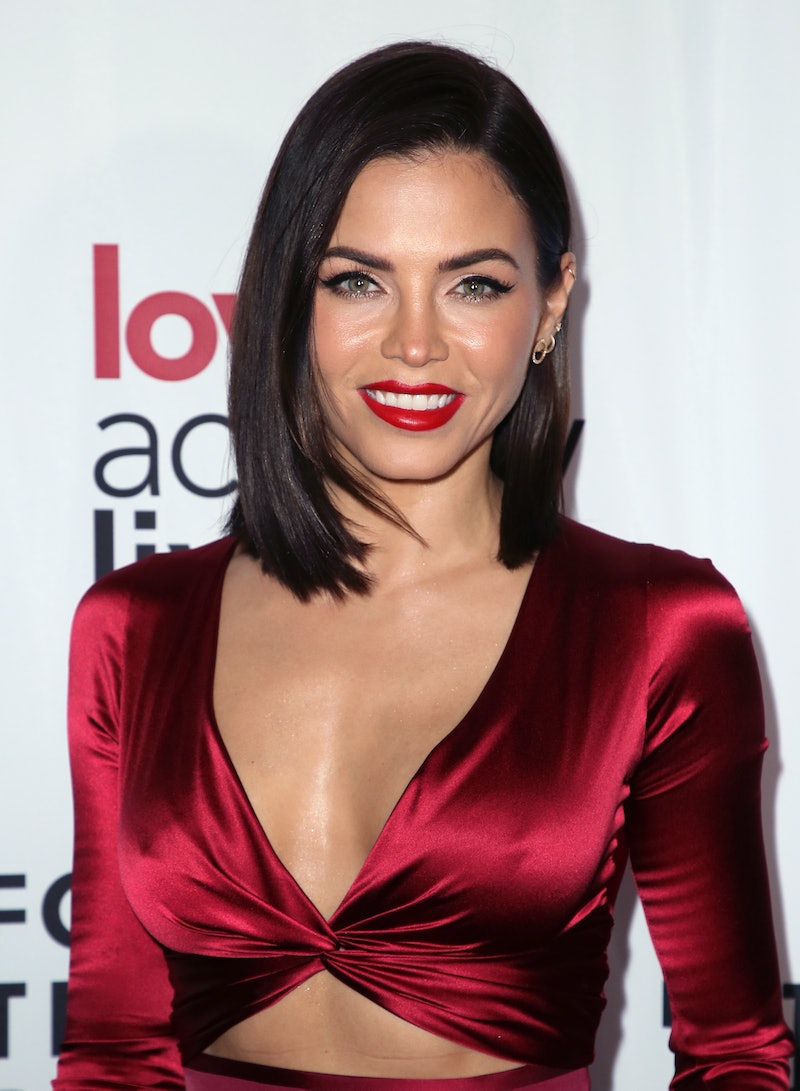 If you need further proof that love actually is all around, Jenna Dewan supported boyfriend Steve Kazee at Love Actually Live on Wednesday evening. People reported Dewan attended the live musical in Beverly Hills with her mom, Nancy Smith, and, per Entertainment Tonight, Dewan's stepfather, Claude Brooks Smith, was also in attendance. It sounds like the outing was a family affair, and one the former World of Dance host reportedly enjoyed immensely.

According to People, as soon as Kazee was seen on stage (he's playing Jamie, the role Colin Firth originated in the 2003 film), Dewan couldn't stop smiling. She reportedly kept clapping and cheering for the singer/actor, especially during once scene when he took off his jacket, similar to Firth taking off his sweater in the movie when he had to jump into a lake to save papers from the book he was writing.

According to an ET eyewitness at the show, Dewan sat close to the front row and reportedly "teared up during a few scenes." A source also told Us Weekly that Dewan was clearly having fun at the show. "Jenna was constantly pointing at Steve when he was on stage and she was clapping and laughing and whispering to people next to her," the source said. "She seemed to be having a total blast."

After Love Actually Live came to a close, Dewan's cheers for Kazee reportedly continued and she even "threw her hands in the air" over his performance. During the curtain call, the Step Up actor was also seen smiling and supposedly blew Kazee a kiss, per ET.

ET's eyewitness also revealed that at Love Actually Live's after-party, Kazee and Dewan hugged and kissed. He reportedly even hugged Dewan's mom. As reported by People, Dewan's mom told someone at the show that she's been a fan of Kazee's for years. It sure sounds like The Resident star has her mom's complete support.

Dewan also shared a boomerang of the Love Actually Live stage, which she posted on her Instagram Story on Wednesday. She even walked the red carpet and posed for pictures, as seen above in the featured image.

On Dec. 6, ET asked Kazee about Dewan, while also discussing Love Actually Live, and he remained pretty coy. However, the 43-year-old said, "I'm very happy at the moment, it's a good holiday right now. It's a good Christmas this year." The outlet pushed further about whether or not the couple would spend Christmas together. He answered, "I'll be working."

ET also asked him about the birthday Instagram Kazee shared for Dewan on Dec. 3 (above), in which he sweetly wrote, "Happy Birthday Jenna! Somehow it feels like my birthday over and over again because I keep getting the gift of you every day." In the same post, he also shared candids of the two in a photo booth. One of the pictures also showed them kissing.

In response to the romantic post, he commented, "You know, it's a very good holiday this year." He later added about having a great 2018, "I've had my birthday — Oct. 30 — so I get sort of Halloween, Thanksgiving, Christmas, it's been perfect this year and that's all I can say."

Of course, ET also brought up Dewan telling the outlet that she's "very happy." He replied, "Did she say that? I didn't see that." Kazee later added, "Well, she's a very happy person, in general, I think. I can't take any credit."

There's no doubt they both seem happy together. It also makes complete sense why Dewan would cheer so hard for her man at Love Actually Live. In ET's video posted above, there's a glimpse of Kazee singing Joni Mitchell's "Both Sides Now" (around the 2:43 mark) and, yeah, even Emma Thompson would be clapping so hard for him.