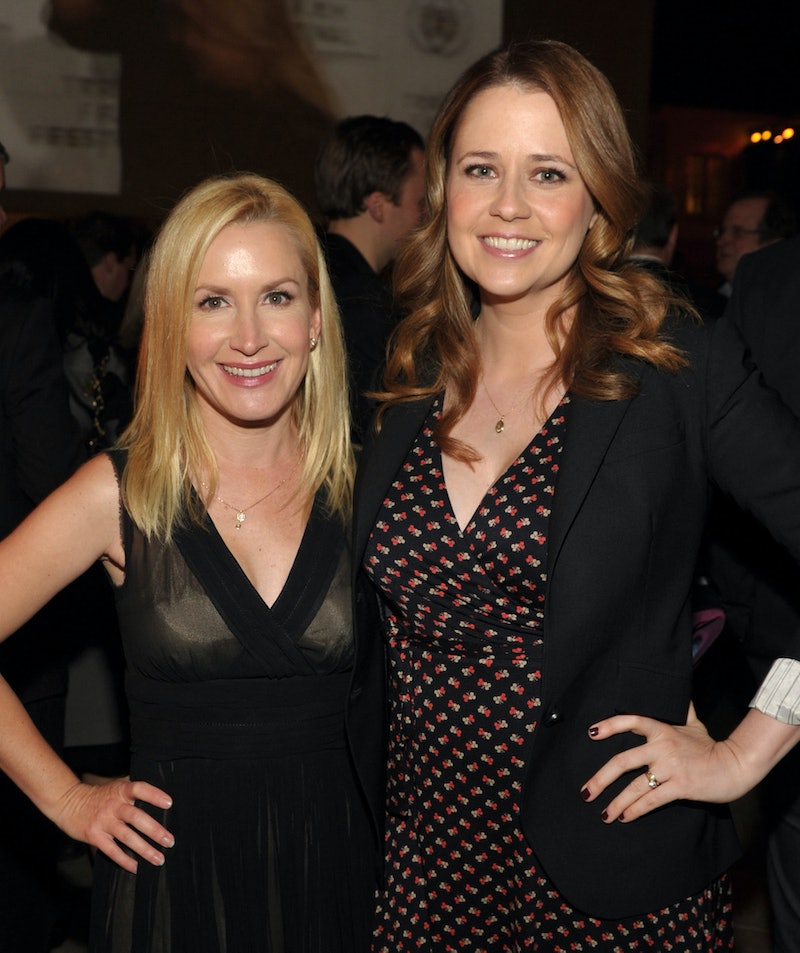 TV friendships are the best friendships. When you become invested in a series, there's something comforting about knowing the cast of that particular show are friends in real life. And when that comedy or drama ends, to know that the stars haven't lost touch is a wonderful feeling. Well, that's exactly the case here for these former stars of The Office, because Jenna Fischer and Angela Kinsey have the cutest friendship.

They are legit best friends. If you adored them as Pam Beesly and Angela Martin in the hit NBC comedy, then you most definitely want to follow them on Instagram. Both love sharing photos of their current adventures as besties. They even post throwback pictures from their Office days. Speaking of, Kinsey recently shared a flashback of herself and Fischer during the filming of the Season 2 episode "Booze Cruise." It's a must-see photo, especially because of what Kinsey wrote alongside it:

My bff @msjennafischer found this photo of us from the Booze Cruise episode of #theoffice and texted it to me. It was the moment I found out I was going to be a series regular. We were so happy and delirious from night shoots on a boat! Steve Carell told us that no matter what happened with the show the thing we'd take away from it would be the friendships and boy was he right. ‌

How sweet is that? They formed an amazing friendship during their nine years filming The Office and have been inseparable ever since.

Really, Fischer and Kinsey's friendship is far from the relationship their characters had at Dunder Mifflin. Angela and Pam rarely got along or saw eye to eye. Yes, they had some friendly moments, but more often than not, they were on opposite sides.

Pam & Angela Do Not

Angela just didn't know how to have fun.

This is how besties act.

Pam & Angela Did Not

They Have Matching Hoodies

They Hold Underwear Together

This is also the photo Jenna used to wish Angela a happy birthday.

Nope, So Not Pam & Angela

They Go To Awards Shows Together

So Not Angela & Pam

Only Pam knew how to make the Dundies fun.

The only way to hike.

Angela & Pam Not So Much

They couldn't even agree on animals.

They Sip & Paint Together

This Was More Pam's Scene

Though, Angela might love painting cats and one in tribute to Bandit.

They Give Each Other Cute Gifts

That "BFF" mug is from Kinsey to Fischer.

Pam & Angela Had Opposite Tastes

Kind of hard to buy for someone who shops here.

They Miss Seeing Each Other Every Day

As Kinsey wrote in August 2016 about her relationship with Fischer, "I can't tell you have [sic] nice it was to sit on my back porch this morning with my bff! We got to chat and chase our kids around the back yard and just be together! It had been too long! I miss a lot of things about #theoffice but at the top of the list is being able to see my bff every day! Love you @msjennafischer." I mean, does it get sweeter than that?

I mean, they were the "dream team" for the party planning committee.

Fischer and Kinsey's friendship is how all friendships should be.