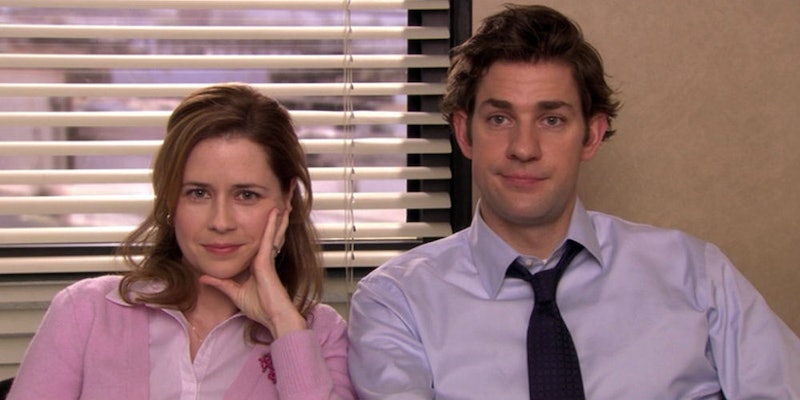 Michael Scott isn't the only hockey fan from The Office. Now that the Boston Bruins and the St. Louis Blues have made it to the Stanley Cup Finals, fans are passionately rooting for their teams. Even Jenna Fischer and John Krasinski are feuding over the Stanley Cup Finals. That's right, the actors who played beloved couple Pam and Jim on The Office aren't fans of the same team.

Since Tuesday, May 21, the two have been tweeting each other about the major NHL event. You see, Fischer is originally from St. Louis, which means she wants the Blues to win. As for Krasinski, he hails from Boston, so he's rooting for the Bruins.

After seeing a video tweeted by the St. Louis Blues of Fischer wearing a jersey with her name printed on the back, Krasinski retweeted it and wrote, "Uh oh..." In the video, the Splitting Up Together star can't contain her excitement and even declared loudly, "Hey, St. Louis, it's game seven. Let's go, Blues! Yeah!" Fischer responded to her former TV husband by retweeting his "Uh oh..." tweet and writing, "This is going to be interesting."

Their back and forth on Twitter didn't stop there, but as you can already tell they are being as polite as possible about the fact that they don't want the same team to win the Stanley Cup title and trophy.

As Office fans know, Pam and Jim argued from time to time and even had petty feuds, but both situations usually involved the two being as kind as possible. They loved each other too much to be extremely harsh or go way too far if they were on opposite sides (save for Season 9 when they had relationship problems). That's just who Jim and Pam were. Clearly, Fischer and Krasinski are channeling their characters when it comes to expressing their feelings about the professional hockey finals.

On May 22, Fischer also retweeted a side-by-side image of herself in a Blues jersey and Krasinski in a Bruins shirt (via Twitter account @Veleno), and wrote, "Oh boy..." Krasinski shared the same tweet as Fishcer and once again captioned it, "Uh oh..."

If that isn't enough, Fischer also shared a tweet from NBC Sports Boston that used a GIF of Pam and Jim alongside the text, "Jim vs. Pam: #NHLBruins vs. @StLouisBlues #StanleyCupFinal divides @theofficenbc's favorite couple - @johnkrasinski & @jennafischer." Fischer replied, "This is amazing."

Diehard Office fans are even getting in on the fun by sharing hilarious reactions, including one from Sportsnet replying directly to Krasinski's second "Uh oh..." The Canadian sports network wrote, "Blues. Bruins. Battlestar Galactica."

For those who don't get the reference, Jim once impersonated Dwight (Rainn Wilson) in Season 3, Episode 20, "Product Recall." In that episode, Jim uttered the famous line, "Bears. Beets. Battlestar Galactica."

It sure seems like Fischer and the Jack Ryan star are just joking around about what is actually a pretty funny situation — and one that gives fans Pam and Jim flashbacks.

However, if Michael Scott were involved, he'd probably throw on his hockey skates and gear and slam his opponent into the ice skating rink wall. That would definitely happen if Toby was rotting for the opposite team. Thank goodness Fischer and Krasinski aren't as competitive and childish as Michael. They clearly still have nothing but love for another.

More like this
The 'Kenan & Kel' Reunion On 'SNL' Took A Dramatic Turn, Thanks To Keke Palmer
By Brad Witter
The First Trailer For 'That '90s Show' Includes So Many Nods To The Original Series
By Jack Irvin, Alyssa Lapid and Grace Wehniainen
Paris Hilton’s Tweet About The 2006 “Holy Trinity” Photo Will Make You Feel Old
By Marina Watts
Lindsay Lohan Just Recalled A Hilarious 'Parent Trap' Story
By Sam Ramsden
Get Even More From Bustle — Sign Up For The Newsletter