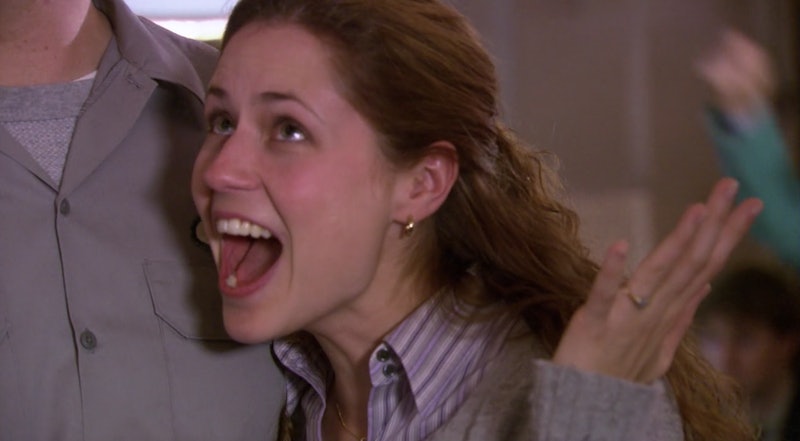 Most people are in agreement that The Office is one of the best comedy shows of all time. Even though The Office ended over six years ago, the cast and crew are still blessing fans with new content, whether it’s photos from a lovely reunion or new footage unearthed from the vault. Well, on Wednesday, April 17, Jenna Fischer rediscovered her behind-the-scenes vlog from The Office that she shot while filming the infamous “Booze Cruise” episode. And, luckily for fans, she shared the video on Twitter, and it’s jam-packed with adorable clips from the cast that will make you want to relive the doomed booze cruise (or marathon the entire series) all over again.

The video has actually been floating around on YouTube since 2007, which will only fill fans with shame — how did this gem stay hidden for so long? It begins with an introduction from Fischer that will immediately bring fans back to the tacky but kitsch graphic design trends of 2006. The quality of the footage also looks about right for mid-2000s time period. And that's how you know, it's legit.

“OMG. I just found this Behind the Scenes video I shot from the Booze Cruise episode of The Office,” Fischer exclaimed on Twitter, sharing a link to the utterly adorable footage. “Sorry for the poor film quality. But man, this took me back!”

Throughout the video, the actor talks to members crew about the challenges of preparing this episode (it was partly filmed on a boat, after all). Nearly everyone in the main cast makes a quick cameo appearance in the behind-the-scenes footage. There's even a wave from Steve Carell.

In one surreal and soon-to-be iconic moment, Fischer goes up to Amy Adams, who guest-starred as Jim's date Katy in the episode (or “Katy purse girl” as described by Fischer), and declares that she wants the actor’s hair. “Your hair looks beautiful,” she says in the clip, to which Adams responds with a polite “thank you." Fischer goes on, saying “Oh I wish I had your hair," with a wistful sigh. “You would if you just told make-up and hair that you want your hair like this,” Adams responded with a laugh. Alas, Amy Adams' hair might not have worked for Pam character-wise at the time, but fans will note that Pam's hair did become more Amy Adams-esque in later seasons.

In the video, Fischer also provides an appropriate amount of teasing to John Krasinski and Angela Kinsey, who pretend to be the world’s cutest couple for the camera. “You guys could not be more adorable right now,” she says. So, Jim and Angela shippers, if you exist, this footage is for you.

Also included in the vlog is footage of Rainn Wilson and Craig Robinson locked in an intense staring competition, and a clip of Wilson belting out a Hall & Oates song like there's no one watching.

Not one to be outnumbered, Fischer handed off the camera a couple times and appeared in the vlog herself, joking about Pam's "stunning" engagement ring from Roy and ending with footage of her taking a nap. Hey, boats can be tiring! The entire video is a joy to watch and exactly the kind of perfect content that keeps The Office just as relevant today as it was over a decade ago.