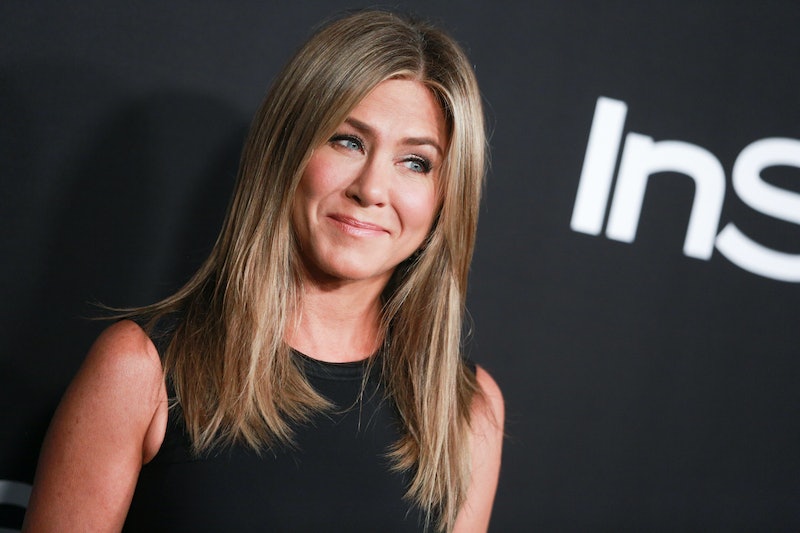 If you see Jennifer Aniston and think, "There's a woman who has it all," you'd be wrong. Sure, she HAS a history for breaking records when it comes to TV salaries. And yes, she HAS completely influenced haircuts for the past 30 years. And you bet she has the most hydrated skin thanks to Aveeno lotion and Smartwater. But there was one thing the star didn't have until today: Jennifer Aniston now has an Instagram.

For her Instagram debut, Aniston decided to go with a selfie — not just of herself, though. It featured all of her old Friends cast-mates too: Lisa Kudrow, Courteney Cox, Matt LeBlanc, David Schwimmer, and Matthew Perry. "And now we’re Instagram FRIENDS too. HI INSTAGRAM," she captioned the photo.

The actor didn't waste any time making her presence known on other people's pages either. "You don't have to # me anymore," she commented on a photo of the Friends cast that LeBlanc posted in mid-September, weeks before @jenniferaniston officially existed. On Oct. 6, Cox shared a selfie of herself, Aniston, and LeBlanc and wrote, "A rare night and I love it." After Aniston created her account, she made up for lost time by going back to Cox's page and replying, "A rare comment and I love YOU."

The account comes just a couple days after Instagram legend and newest TikTok star Reese Witherspoon pitched an "intriguing" argument to Aniston during their Morning Show press tour. In a recent interview with Entertainment Tonight, Aniston admitted that because of Witherspoon, she sees the value in being able to "have a little bit more control over the narrative that's out there."

Prior to that interview, though, Aniston had been consistently against social media. "We work so hard to maintain some sort of life and privacy," she told Harper's Bazaar of celebrity life back in 2016. "Why would we intentionally put ourselves out there [on social media]?" The following year, the actor told Vogue, "Honestly, when I look around and see people constantly on their phones, I feel like we're missing so much. And it's something we created." In fact, Aniston was so anti-Instagram that she banned guests at her 50th birthday party from posting pics back in February.

While Aniston finally caved and joined Instagram, she doesn't have a Twitter account yet. She's also not the last of the Friends cast to take the Insta plunge — Perry is still holding out.