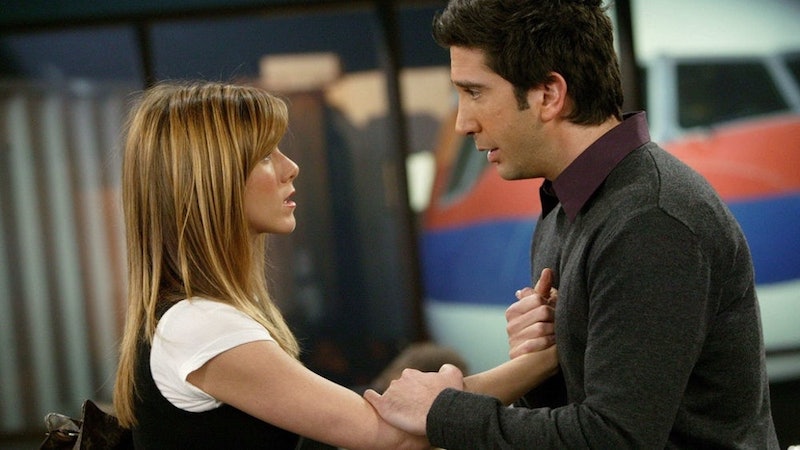 So no one told us life was gonna be this way, but now here we all are and Friends has been off the air for 15 years. Yet even now fans can't stop looking back at these beloved characters and wondering what they would be up to now all these years later — a question that one cast member recently attempted to answer. Jennifer Aniston's latest Friends comments found the former Central Perk customer attempting to predict where Ross and Rachel would be today — and more importantly, whether or not they would still be together or on yet another break.

The topic came up when Aniston appeared on the Today show alongside her current costar, Adam Sandler, to help promote their latest project on Netflix, titled Murder Mystery. And since it's impossible to interview a Friends star without asking about something in connection to the popular NBC series, West Coast anchor Natalie Morales jumped at the chance to get Aniston's thoughts on Ross and Rachel's current relationship status.

“If Rachel Green were out and about today, where would she be? Is she with Ross? They’re back together?” Morales asked Aniston. “Yes, absolutely,” Aniston responded in regards to the famous TV couple still going strong.

Taking things a step further, Aniston even went on to try and predict what their daughter Emma would be doing as well. “Emma’s grown up. She’s in college? Not yet…," Aniston stated, while Sandler chimed in to help clear up the timeline. "High school,” he corrected, adding: “She’s vaping in high school and you’re just lookin’ the other way. Way to go.”

Sandler's right in that Emma would now be 17 years old, having been born back in May 2002, meaning this fall she would be about to embark on her senior year of high school. (One can only hope Ross and Rachel would go on to document her prom with the same camcorder used to document theirs.)

Interestingly enough, though, this isn't the only time the topic of Friends has come up in recent interviews with Aniston. While appearing on The Ellen DeGeneres Show, Aniston revealed that she would do a Friends reunion if asked. "I would do it," Aniston admitted on the show. "The girls would do it. And the boys would do it, I'm sure. Listen. Anything could happen."

But as exciting as that prospect is, the creators don't seem to have the same mindset when it comes to getting the gang back together. During an interview with Rolling Stone back in March 2019, Marta Kauffman stated why she didn't think a Friends reunion was a good idea, explaining:

"One, the show is about a time in your life when your friends are your family. It's not that time anymore. All we'd be doing is putting those six actors back together, but the heart of the show would be gone. "Two, I don't know what good it does us. The show is doing just fine, people love it. [A reunion] could only disappoint. "The One Where Everyone's Disappointed."

Regardless, it's possible Aniston's continued comments about the show could generate enough interest to turn this dream into a reality. And if that happens, we'll be there for these characters just like they've been there for us all these years.

More like this
Courteney Cox & Jennifer Aniston’s Latest 'Friends' Revival Is Everything
By Darshita Goyal
Netflix Reveals First Look At Wednesday In The 'Addams Family' Spinoff Series
By Bustle Editors
Here's What Jeffrey Dahmer's Dad Has Said About His Other Son, David
By Grace Wehniainen
The Bling Ring's Alexis Neiers Has Come A Long Way Since Her 'Pretty Wild' Days
By Sophie McEvoy and Arya Roshanian
Get Even More From Bustle — Sign Up For The Newsletter