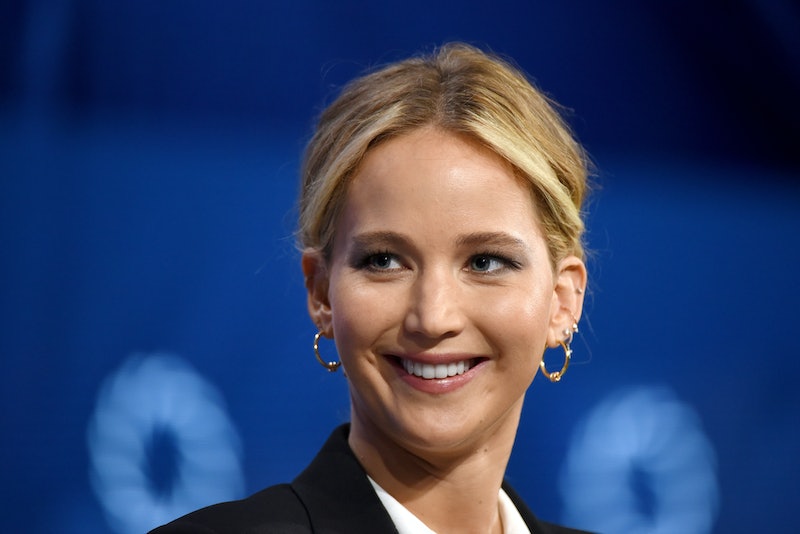 It looks like the rumors are true. On Tuesday, Feb. 5, news broke that Jennifer Lawrence is engaged to Cooke Maroney, as her rep confirmed to E! News. (Bustle reached out to Lawrence's rep for confirmation, but did not receive an immediate response.)

Earlier on Tuesday, the New York Post's Page Six reported that the Oscar-winning actor was wearing a "massive ring" while the couple dined at Raoul's in New York City. “It was a giant rock. They seemed like they were celebrating and people were talking about it,” an unnamed source told Page Six. “The ring was very noticeable. They were sitting back in a corner.”

Speculation continued throughout the day, until both E! News and People confirmed Lawrence and Maroney's engagement. Maroney is the director of the NYC art gallery Gladstone 64, the East 64th location of the Gladstone Gallery, according to the gallery's website.

Reports of Lawrence and Maroney's relationship first surfaced back in June 2018. At the time, an unnamed source told Page Six that the actor and the art gallery director reportedly met through Lawrence's friend, Laura Simpson. “They met through Jen’s friend Laura," the source told Page Six in June 2018. "The relationship has been going on a few weeks. But they have been very private and careful not to be seen together.”

Since then, the couple has been spotted out and about in NYC, Paris, and Rome, according to E! News. The couple, though, has kept their relationship private. Last month, an unnamed source told Us Weekly that Lawrence and Maroney's relationship was "very serious," and “they definitely appear to be in it for the long haul.”

In September 2018, Lawrence and Maroney attended the premiere of The Favourite at the New York Film Festival, an event where People two of her exes were in attendance: Nicholas Hoult (they dated for four years), and Darren Aronofsky (they dated for a year and made the movie mother!).

But now, Lawrence seems to be ready to take the next step with Maroney. Though Lawrence hasn't mentioned Maroney publicly in any interviews, she has told several media outlets how she feels about marriage. In a 2015 interview with Vogue, the actor was enthusiastic about getting married one day. "I can't wait to be married. I feel like if I find that one person who I want to spend the rest of my life with, who I want to be the father of my children, that I would absolutely not fuck it up," she told the publication. "But I'm also not banking on that."

In November 2015, Lawrence told Diane Sawyer in a Good Morning America interview that she definitely wanted to have a family someday. "I don't feel like I need anything to complete me," she said "I love meeting people. People coming into your life and bringing something. I don't really plan on getting married. I might. I definitely want to be a mother."

But first, it seems, marriage is in the cards for Lawrence and Maroney, if the reports are indeed true.

More like this
Paul Mescal, Man Of Mystery
By Samantha Leach and Heather Hazzan
Khloé Kardashian Is Reportedly Dating A Private Equity Investor She Met Through Kim
By Jordyn Tilchen and Jake Viswanath
Tyler Perry Makes Rare Comment About Meghan Markle & Prince Harry's Love Life
By Radhika Menon
Dixie D’Amelio & Noah Beck “Love Each Other” Despite Breakup Rumors
By Julia Emmanuele, Jordyn Tilchen and Grace Wehniainen
Get Even More From Bustle — Sign Up For The Newsletter