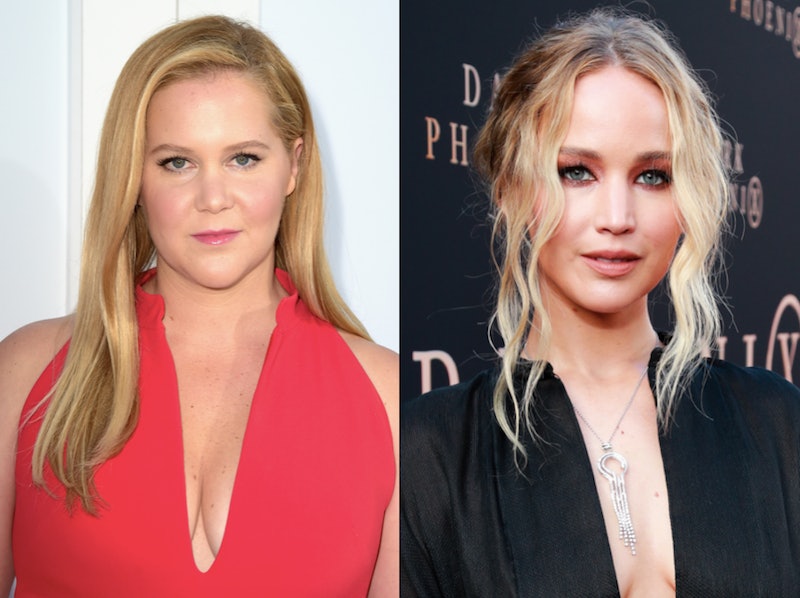 Amy Schumer has been a bit busy as of late, considering that she gave birth to her newborn son Gene Atwell Fischer on May 5, 2019, and one of her closest friends now has some beef with the baby because of it. And it's all on display in Jennifer Lawrence's texts to Amy Schumer about The Handmaid's Tale in which she expressed some of her hilarious frustrations. It turns out that Lawrence might be frustrated with Schumer's baby because he might be starting to interfere with his mother's sleeping patterns. And that new sleeping schedule recently clashed with Lawrence's urgent need for Schumer: when she watches TV, or more specifically, The Handmaid's Tale.

The comedian posted a hilarious text exchange between Lawrence and herself on her Instagram Story on Tuesday, captioning the image “Everybody keeping their cool about me having a baby". “You up? I have questions about hand maids take,” Lawrence wrote to Schumer, before correcting herself and saying “tale.” When she didn't respond immediately, rather than turn to Google like a normal person would, the actor urgently pressed her again, adding “It’s an emergency" before finally explaining her crisis. "Amy!!!” What did she do on season 1 to deserve being in the gallows on season 2."

Spoiler alert: Lawrence was referring to a scene during The Handmaid's Tale season 2 in which Elizabeth Moss' character June and other handmaids were tortured after (rightfully) attempting to escape the dystopian land of Gilead.

When Schumer still didn't respond, Lawrence's desperation just grew stronger, and her frustrations came out. "I can’t remember where I left off. Are you asleep bc of the baby??? Are you asleep before 11? Is this bc of the baby? Don’t make me resent the baby," she hilariously texted her friend, before finally accepting the shocking truth. "Wow. Ur really asleep before 11, I’ll be damned."

Putting aside this joking beef with the baby, the most shocking reveal from these messages is that it seems like Lawrence is watching the second season of The Handmaid's Tale without viewing the first, which just seems like an unwise decision in general.

As it turns out, Schumer was awake, but just busy, presumably with maternal matters. “Hi! I’m awake! She ran away,” she finally answered. Given that there was no new timestamp on the conversation when she texted back, it seems that Schumer responded to her friend within an hour, which only highlights Lawrence's impatience even more. Hey, when it comes to The Handmaid's Tale, time is of the essence!

This isn't the first hilarious communication that fans have seen from the close friends. In April 2018, Schumer posted a screenshot to her Instagram Story of a text with Lawrence asking about her and her husband Chris' plans for dinner, but the convo ended up being very one-sided. “What’re you doing tonight? You and Chris wanna get dinner? Or hang?” she asked, as reported by PEOPLE. The Oscar winner added that she was “about to go to park,” before informing Schumer that she had to cancel her dinner invitation — just an hour after sending it. “Haha I can’t get dinner tonight I have plans,” she wrote. Another hour later, Schumer finally responded with a witty remark: "Good talk." So, clearly, these one-sided conversations are nothing new for the pair.

Here's hoping that Lawrence and Schumer's hilarious friendship translates on-screen in the upcoming project that they wrote together, which there hasn't been an update on since March 2018, when Lawrence talked about the film on Watch What Happens Live. Why is there a hold-up for what's sure to be one of the best comedies of the century? Fans demand answers.