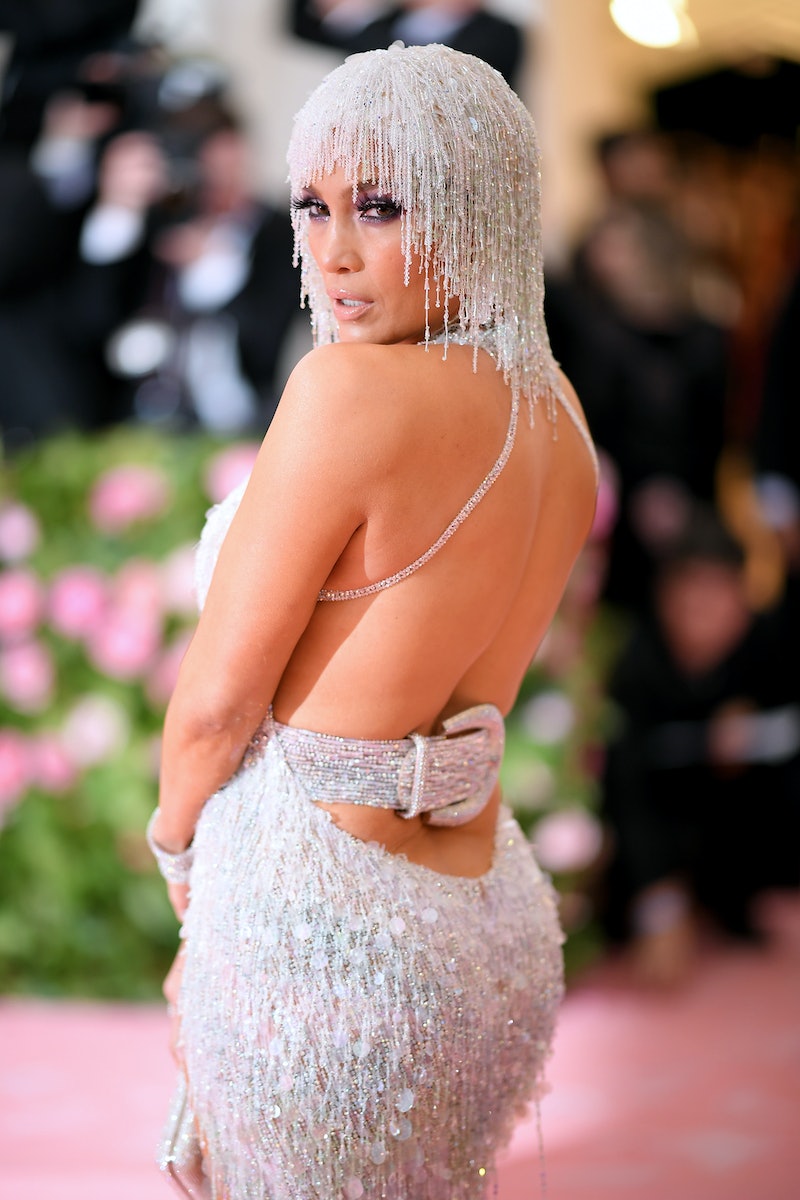 The Met Gala has long been a platform for stylish celebrities to go off and show off their most avant-garde looks. And each year at the Met, the museum announces a theme for attendees who are dressing up. This year's theme was “Camp: Notes on Fashion,” inspired by Susan Sontag's 1964 essay Notes on Camp, and by no surprise, Jennifer Lopez’ 2019 Met Gala outfit was one of the most breathtakingly spot-on looks of all.

Lopez has delivered many jaw-dropping costumes at the Met Gala, but this one has to be one of her most outrageously gorgeous this far. The singer took to the red carpet in a gorgeous, shimmery silver gown that draped down into a beaded train. According to Entertainment Tonight, the dress was designed by Versace, who’s dressed Lopez in the past for the Met Ball.

While J.Lo’s gown looked just like a work of art all on its own, she also paired the number with a pair of sky high, platform holographic heels. For accessories — as if she needed to make this Met Gala outfit any sparklier — Lopez wore a large diamond necklace with a purple gem in the middle, along with two chunky, statement bracelets on either wrist, and a small shimmery custom Judith Leiber clutch. The only thing on the singer and dancer that wasn't shimmering was her nails, which she had painted white. Clearly balance is everything, even on the most important night in fashion.

In previous years at the Met Gala, J.Lo has worn her hair and makeup fairly simple, but always stayed true to Hollywood glamour. But this year, the singer opted to rock the dress with a matching, flapper-like beaded cap on top of her head, throwing fans for a loop by keeping her hair hidden. For makeup, Lopez rocked a fully beat face with a purple, smoky eye and ultra-bold lashes to match the stunning stone around her neck. She also dusted on few strokes of highlighter on her nose, some brown plush on her cheeks, and opted for a glossy, nude lip.

J.Lo is one celebrity whose style at the Met Gala is equal parts simple and sultry. The star has attended the charity event a total of 10 times, and her looks have only evolved to get better and better. The “Dinero” singer first stepped onto the Met Gala carpet in 2004 wearing an all black Dolce & Gabbana dress that featured a corset on top and a whole lot of dramatic flare in the skirt.

While a lot of her earlier looks were full of grace, but tame in color, Lopez certainly let color run wild at the 2011 Met Gala where fans saw nothing but red. Sporting a crimson look for the "Alexander McQueen: Savage Beauty" theme that year, J.Lo wore a floor-length Gucci gown with flowers gracing her neck and shoulders.

Judging by Monday night's super glam look, for someone who could be considered as a Met Ball veteran, J.Lo consistently rocks her outfits as if it was her debut on the iconic red carpet all over again.