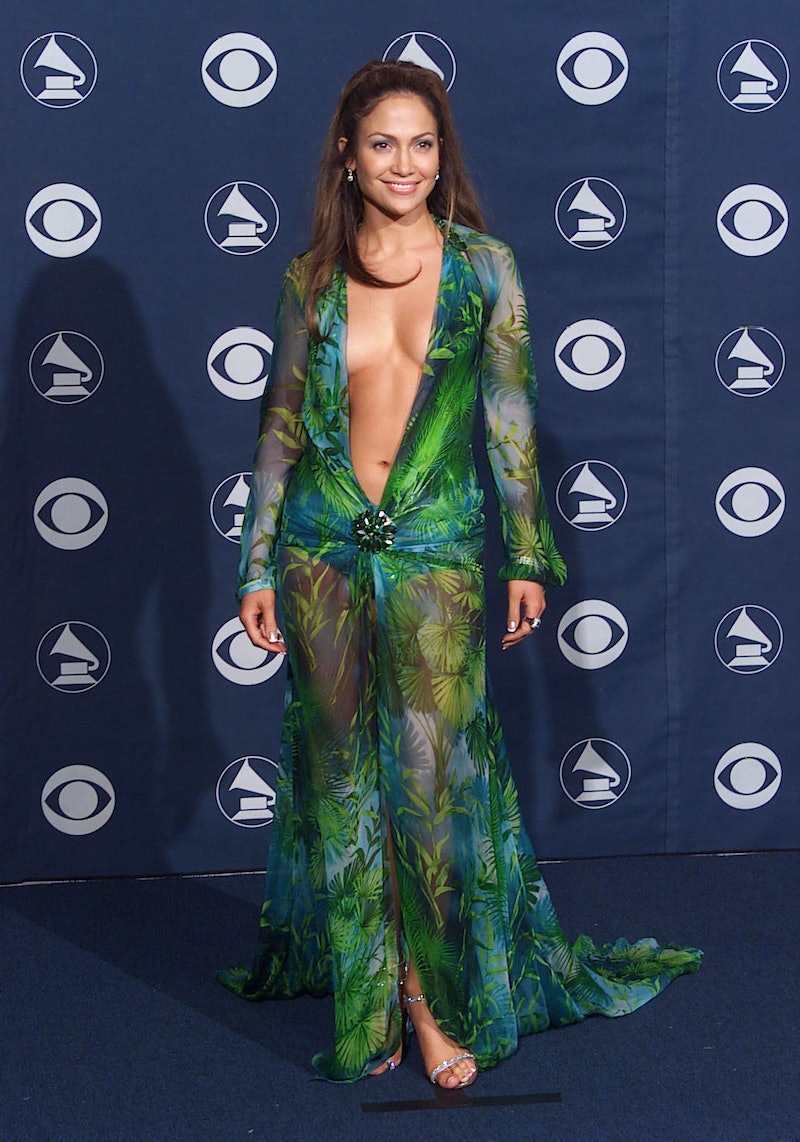 One of Jennifer Lopez's biggest style moments during her career was when she wore a belly button-bearing green Versace dress to a red carpet in 2000. But in a new interview, Lopez shared that her Grammy Awards Versace dress moment almost didn't happen. In fact, she was about to go with another dress entirely.

In the debut episode of Lopez's new YouTube series, “Moments of Fashion," the artist explained the experience of picking out the sheer, tropical print dress. Lopez remembered how she was nominated for a Grammy that night, but was also busy filming scenes for her upcoming movie, The Wedding Planner.

Lopez's stylist at the time, Andrea Lieberman, came to Lopez the day before the Grammy Awards and told the artist she had to buckle down and pick out a dress for the ceremony. But since Lopez waited until the last minute, Lieberman had only about three or four dresses to show. Lopez said her schedule was hectic between recording new music and filming movie scenes, so she picked out the gown a few hours before the Grammy Awards.

"Usually if you come to a fitting of mine, there are tons of dresses and tons of shoes. There's always so many choices. But this day we only really had a choice between two dresses," Lopez shared in the video. “One was kind of like a white dress and the other was the Versace jungle-print dress.”

Lieberman told Lopez that she thought the artist should go with the white dress, because the Versace gown was already worn previously by three other people — including Donatella Versace herself. Since it was the Grammy Awards, Lieberman reminded Lopez that wearing something new was key.

Lopez tried on both dresses, and when she walked out in the Versace, her longtime manager and friend, Benny Medina, made up Lopez's mind for her. “I put on the green dress and come out and Benny goes, ‘That’s it. That’s it. Don’t even talk about it. That’s the dress,'" Lopez said.

Her stylist was horrified that her client was going to wear a repeat number, but Lopez decided to go with the tropical Versace in the end.

The only thing Lopez worried about was whether the dress was "going to blow open" thanks to its deep neckline, but Lopez covered her bases with rows of double-stick tape.

When Lopez arrived at the Grammys, she said that there was a bottleneck of people blocking the red carpet. But once she stepped onto the path, Lopez remembered that there was a wave of murmurs and people just started parting for her. But Lopez said she was clueless over the fact that her dress was causing the stir.

“It was a frenzy," she said in the video "The flashes started going in a way that it’s not usually. There was an extra kinetic energy there. I was like what the hell is going on? I had no idea it was about this dress.”

It finally struck Lopez over how iconic her dress choice was when she walked onto stage to present an award, and her outfit got a standing ovation. “All of a sudden, again, a slow murmur and everybody starts clapping. We get an ovation for just standing there!” Lopez said. “In that moment, that dress became something that people still reference.”

It's baffling to think how close Lopez came to not choosing the Versace dress that has become a permanent fixture in both pop culture and fashion history. Sometimes waiting until the last second really does work.