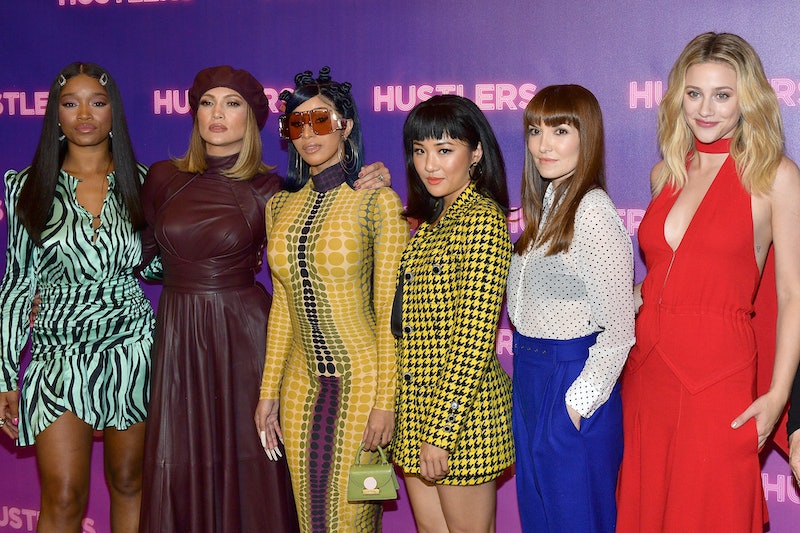 Cardi B seems like the most confident person on Earth. She is an effortlessly great performer onstage, and her willingness to open up about her life online (and defend herself when needed) is pretty fearless. But according to her Hustlers co-star and "Dinero" collaborator Jennifer Lopez, even Cardi B gets nervous sometimes. Although it might sound somewhat shocking, this story about J-Lo calming Cardi B's nerves on the Hustlers set only proved how truly supportive they are of each other.

During a recent interview on the Hustlers press tour with Heat, J-Lo was asked about working with Cardi on the film, and shared a surprising story about how nervous the rapper was about filming — she couldn't even leave the comfort of her trailer. Naturally, the singer decided she had to take matters into her own hands.

As it turns out, Cardi had absolutely nothing to worry about, as both J-Lo and co-star Constance Wu had nothing but praise for her performance in the powerful stripper heist film. "She was awesome, she's a natural," the singer said. "She's a real natural and she did great in all of her scenes. And she understood this world, more probably than any of us, the other girls in the movies who were strippers. She understands this."

J-Lo is not the only member of the Hustlers cast talking about Cardi's surprising shyness. Costar Keke Palmer also recently opened up about working with the rapper to Jimmy Kimmel on his late night show, and said that Cardi's shyness actually showed her commitment to the role. "The scene I did with her, it was really dope," Palmer said. "She actually can be a little bit shy, so it was cool to see her being so serious about the acting. It was just cool to see a different side of her."

However, Cardi had a good reason to be nervous on set. Aside from it being her first film role, the rapper also felt that she couldn't "shine" while filming Hustlers and show off her experience as a former stripper as much as she wanted to for medical reasons, as she told Entertainment Tonight in an interview. "You know what? I was really mad because let me tell you something," she explained. "When I did the movie, I just got my t*tties done and I got lipo, right? So I was like, 'This is my moment to shine, and I can't shine because I can't climb!' So I was mad. I was like, 'Goddamn it!'"

Despite Cardi's initial nerves, her co-stars' adoration indicate that she still dominated her first major film role, just as fans knew she would.