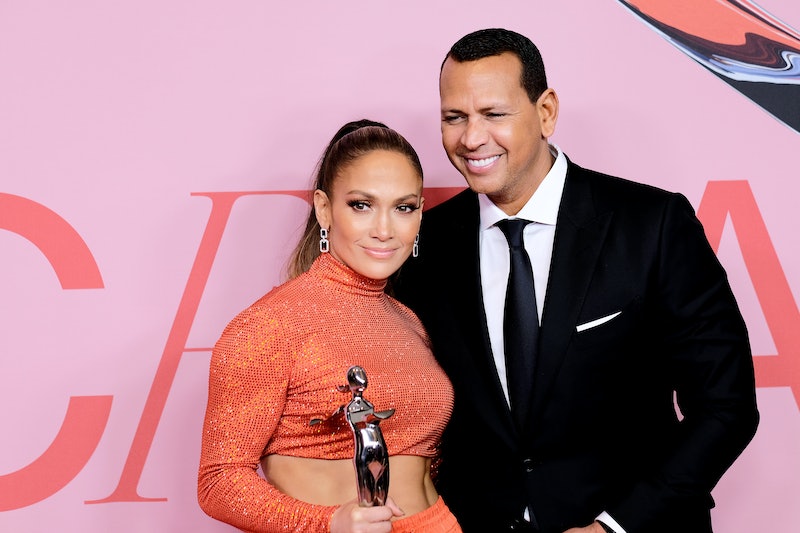 On Tuesday, Oct. 8, E! News reported that Jennifer Lopez is being sued for alleged copyright infringement by Splash News and Picture Agency after posting a photo with fiancé Alex Rodriguez to her Instagram Story. The photo in question in the $150,000 lawsuit shows Lopez holding hands with Rodriguez while out and about in New York City back in November 2017, according to court documents obtained by E! News and The Blast. (Bustle reached out to Lopez's rep and Splash News and Picture Agency for comment on the lawsuit, but did not immediately hear back.)

Lopez regularly shares snapshots of her fiancé and herself on social media, but this is the first instance in which copyright infringement has been alleged. The court documents claim that Lopez was not authorized to use the photo since it was not licensed by the singer, as per The Blast. The lawsuit claimed that the photograph is “creative, distinctive, and valuable,” and that “because of the subject’s celebrity status, and the [photograph’s] quality and visual appeal,” the photo agencies should have gained revenue from the photo. The agencies also claimed that Lopez was notified of the infringement in December 2017, according to E! News. In addition to the $150,000, the agencies are also seeking an injunction to prevent Lopez and her team from using the photo again.

The lawsuit leveled against Lopez centers on copyright laws that protect “original works of authorship” such as photographs, as per the website The Fashion Law. When the paparazzi take photos of celebrities or public figures, they often sell the images to photo agencies to distribute the photos for a fee, but pictures circulated without the proper permission and license can result in copyright infringement since the authors of the original works don’t attain the proper revenue, according to the site.

Lopez is not the first celebrity to be sued for copyright infringement over posting paparazzi photos to social media. In April 2017, Khloé Kardashian was sued by photo agency Xposure Photos for sharing a photo of herself and her sisters at a restaurant in Miami on Instagram. The agency, which sought over $150,000 in damages, eventually dropped the lawsuit in February 2018, as per Daily Mail. Similarly, in January, Gigi Hadid was sued by the agency Xclusive-Lee for sharing a paparazzi photo of herself on Instagram. The court eventually dismissed the claim in July, as per The Hollywood Reporter.

As a result of these copyright laws, some celebrities have taken it upon themselves to combat the problem. In August 2018, Khloé and sister Kim Kardashian announced plans to mobilize against copyright infringement claims after several Kardashian social media fan accounts were either shut down or suspended due to the circulation of paparazzi photos of the stars without the proper license and permission. On Twitter on August 2018, a fan brought the deleted accounts to Khloé’s attention. “That’s sooooooo bizarre!! I would assume if you give them credit they would let you guys use them,” she tweeted, as per BuzzFeed. “I wonder if there’s another way around this.”

The exchange prompted Kim to weigh in on the issue. The reality star expressed dismay over fan accounts being shut down by photo agencies and posed the possibility of starting her own agency, concluding in a tweet, “Let me brainstorm w the fam!” In February 2019, Kim announced that she hired a personal photographer, which would allow fans to repost photos without copyright qualms. She added in the Feb. 6 tweet, “If I ever post from an agency I will tag them and I have permission. So those please don’t repost!”

Much of these celebrity copyright laws have been dismissed by the court, but for now, it's unclear how Lopez’s lawsuit will play out.

More like this
Jennifer Coolidge Recites “Jenny From The Block” Beside J.Lo In Her First TikTok
By Jake Viswanath
Jennifer Coolidge Hunted For Jewels & Lashes In J.Lo’s Hotel Room
By Jake Viswanath
Jennifer Lopez Calls Moving In With Ben Affleck's Family An “Emotional Transition”
By Alyssa Lapid
Twitter Is In Awe Of Taylor Swift’s “Lavender Haze” Music Video
By Jake Viswanath
Get Even More From Bustle — Sign Up For The Newsletter
From hair trends to relationship advice, our daily newsletter has everything you need to sound like a person who’s on TikTok, even if you aren’t.