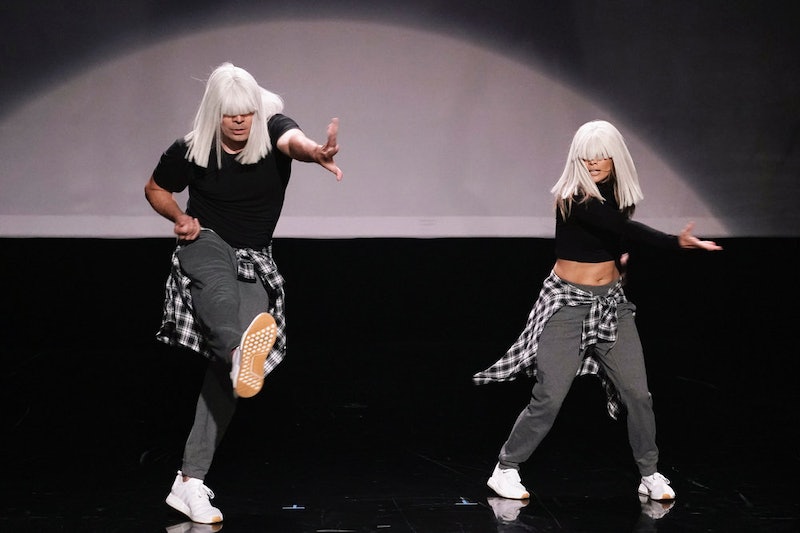 Jennifer Lopez is a master of choreography, among many other talents, and it's hard for anyone to keep up. Just ask Jimmy Fallon. The Hustlers star teamed up with The Tonight Show host for perhaps the most nostalgic performance you've ever seen. Jennifer Lopez and Jimmy Fallon recreated "Señorita" and other videos in a new Tonight Show segment, "The History of Music Video Dancing." And not only did they prove they could totally be Camila Cabello and Shawn Mendes, they also killed it recreating everything from MC Hammer's "U Can't Touch This" to Billie Eilish's "Bad Guy."

In the joyous video, J-Lo and Fallon, dressed alike with plaid shirts wrapped around their waists (like any good '90s hip-hop outfit), take on the most iconic music video moves, from the early '90s to today, without missing a beat. The duo brings back the "Macarena", does it "Gangham Style", and even Nae Naes their way to the audience's hearts. Many of J-Lo's famous peers get a nod, including Beyoncé's iconic "Single Ladies" dance, Lady Gaga's monster claws in "Bad Romance", and Britney's hand-on-heart routine for "Oops... I Did It Again".

They even make great use of props, referencing OK Go's viral "Here We Go Again" video by bringing on actual treadmills, hopping on inflatable wrecking balls in a nod to Miley Cyrus' world-stopping clip, and using a spray bottle to hilariously recreate Shawn Mendes and Camila Cabello's "Señorita." And of course, they couldn't present the history of music video dancing without taking on the singer's own "Waiting for Tonight," complete with neon green lasers.

Although Fallon did a good job keeping up, there's no one that can move better than J-Lo without breaking a single sweat. Needless to say, Fallon was completely winded after the segment, at least according to him. "Right after this I was strapped to an oxygen tank and an IV for the rest of the night," Fallon joked on Twitter. "@jlo is a PRO."

J-Lo was on The Tonight Show to promote her new movie Hustlers, for which she had to learn a new type of choreographed art: pole-dancing. Of course, just like her character Ramona, the ringleader of a group of exotic dancers who take over Wall Street, she quickly became an expert, so much so that she's earning Oscar buzz for her performance in the film. "It's crazy," she remarked on the show, before jokingly shutting down further Oscars talk.

Of course, J-Lo had some help when it came to pole training, including from her co-star, and former stripper, Cardi B. “It’s like learning gymnastics or something but with a pole, it’s super hard,” Lopez said to Fallon. “I called Cardi, Cardi B’s in the movie as well — I was like, ‘You have to be in this movie. You know this world, you can teach us.'” Giving us a hilarious Cardi impression, she said the rapper responded with, “Oh yeah, it took me years to master, but now I’m great at it.”

If rumors are to be believed, J-Lo will have another huge opportunity soon to show off all of her talents. The singer is reportedly in talks to headline the 2020 Super Bowl Halftime Show, something which she has repeatedly said she would love to do. “If they gave me that opportunity, I would take it and I would try to do something,” she recently said to E! News. And when Hoda Kotb asked if she will be performing on her SiriusXM show, she didn't exactly deny the rumors, coyly responding with "I don't know."

Regardless of whether she lands the momentous opportunity, it's very obvious now that no one can touch J-Lo's moves.

More like this
Hilary Duff's Husband Matthew Koma Has Her Name Tattooed On His Butt
By Jake Viswanath and Stephanie Downs
Twitter Can’t Believe The Madonna Biopic Is Scrapped & Fans Have A Solution
By Alyssa Lapid
Prince Harry Incorrectly Recites Christina Aguilera’s “Genie In A Bottle” Lyrics
By Jake Viswanath
Jennifer Coolidge Recites “Jenny From The Block” Beside J.Lo In Her First TikTok
By Jake Viswanath
Get Even More From Bustle — Sign Up For The Newsletter
From hair trends to relationship advice, our daily newsletter has everything you need to sound like a person who’s on TikTok, even if you aren’t.