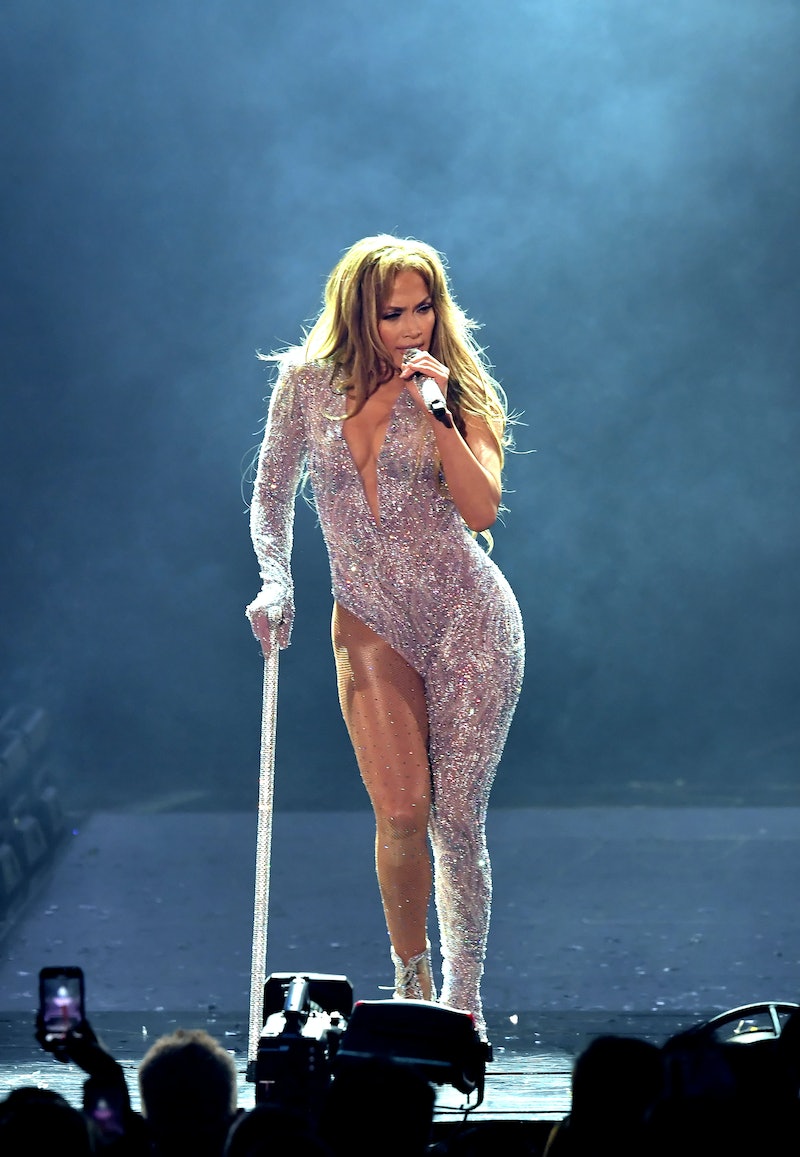 Jennifer Lopez has been rocking the most luscious long hair up until recently. From her CFDA Awards pony to her wavy on-stage looks, long locks have become a signature for Lopez. But that's changing now. Jennifer Lopez's lob is replacing her lengthy tresses. In fact, the singer and actor just went even shorter after first chopping her locks in August.

According to hairstylist Chris Applegate, Jennifer Lopez cut her hair again while attending the Toronto International Film Festival. While the new look may be subtle in comparison her initial chop in August, it's certainly another change for the star. The new look probably seems familiar to Lopez's fans, but it actually is different from her previous lob. The back of the new 'do is stacked. This means that Lopez's hair has been cut a bit shorter in the back to create an asymmetrical look that's slightly longer in the front. Think Victoria Beckham but subtle.

For the event, Appleton styled Lopez's hair into sleek, straight strands by blow drying the hair downward with the Dyson Supersonic hair dryer. By styling the hair in a downward motion, Appleton was able to eliminate frizz. To finish things off, he used the Color Wow Style on Steroids as a heat protectant and smoothed everything to the gorgeous finished look she debuted at the festival.

This isn't the first time Lopez has shorn her hair recently. In fact, it's not even the first time she's done it in the past month. The star of the upcoming film Hustlers debuted a markedly shorter haircut at a photo call for the movie back in late August.

The original look was just as sleek as the new 'do fans got to see on Lopez at the film festival, but it didn't yet feature the stack in the back as it does now. That didn't mean it wasn't a major departure for the singer, though. In fact, Appleton (who cut both of her long bobs) commented in an Instagram photo of the singer and actor, "Long to short real quick," and asked his followers which look they preferred.

As for whether or not the chop is real? It certainly seems to be given Appleton's Instagram statements. However, it appears as though the length is something Lopez plans to play around with.

On Aug. 10, the Hustlers star appeared on Good Morning America to discuss her new film, and while her hair was pulled back into a pony tail, its clear that some extensions had been added to create the sleek look. The long bob she debuted in Toronto wouldn't be nearly as long if swept back into the same look.

How long will Lopez's stacked long bob actually last? Clearly, this star likes playing with the length of her tresses. Fans of the "Dinero" singer and Hustlers star, may just need to be on Hair Watch 2019 during J.Lo's press tour for the upcoming film. Clearly, there's no telling what she could in store for her next look.

More like this
Hailey Bieber's New Bob Is Short Haircut Goals
By Olivia Rose Rushing
J.Lo's Micro-French Manicure Has A Fun, Sparkly Twist
By Olivia Rose Rushing
Blake Lively Debuts Red Hair For The 'It Ends With Us' Film Adaptation
By Olivia Rose Rushing
The Best Beauty Looks Spotted At Paris Couture Week 2023
By Audrey Noble
Get Even More From Bustle — Sign Up For The Newsletter
From hair trends to relationship advice, our daily newsletter has everything you need to sound like a person who’s on TikTok, even if you aren’t.