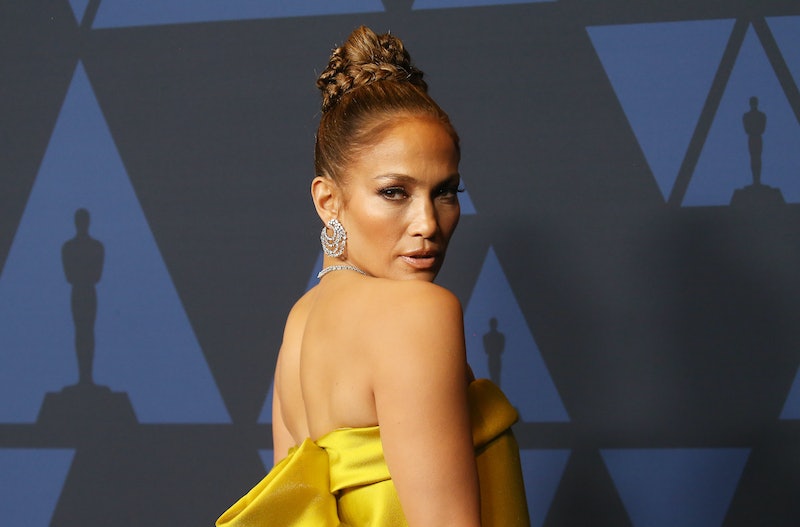 J-Lo is one of the undisputed queens of romantic comedies, having starred in classics like Maid In Manhattan, The Wedding Planner, and Shall We Dance? But it turns out that her numerous forays into rom-coms had an important meaning behind them. And Jennifer Lopez's reason for starring in so many rom-coms reveals a career-long dedication to representation.

During the Hollywood Reporter's annual actress roundtable, published on Wednesday, Nov. 13, Lopez sat down with Scarlett Johansson, Lupita Nyong'o, Renee Zellweger, Laura Dern, and Awkwafina to talk about the thrills and challenges of being an actor in Hollywood. As the topic of diversity was brought up, Lopez explained that her early desire to star in rom-coms was motivated by her goal to represent Latina and Puerto Rican women in films where they are rarely seen.

Lopez wanted to do her part to ensure that women of color were also seen as the "every girl" cast in those roles. "I am the hopeless romantic, I am the single working woman, I was those things," she said "And I remember thinking, I need to be the lead in a romantic comedy. And that's one of the things I went for and that's one of the things me and my agents talked about."

Nyong'o, of course, had her own experience similarly upending the stereotype of what a lead in a horror movie looks like with Us. "The family that we are following is representational of the all-American family," she said of Jordan Peele's hit film. "It is possible that we can see ourselves in the people who are different from us, from other cultures, other creeds," she added.

More like this
Jennifer Coolidge Hunted For Jewels & Lashes In J.Lo’s Hotel Room
By Jake Viswanath
Adam Lambert Called Out The George Michael Biopic Over Potential Casting
By Sam Ramsden
Jennifer Coolidge Recites “Jenny From The Block” Beside J.Lo In Her First TikTok
By Jake Viswanath
How Andrea Riseborough Got Nominated — & Almost Disqualified For An Oscar
By Jake Viswanath
Get Even More From Bustle — Sign Up For The Newsletter
From hair trends to relationship advice, our daily newsletter has everything you need to sound like a person who’s on TikTok, even if you aren’t.