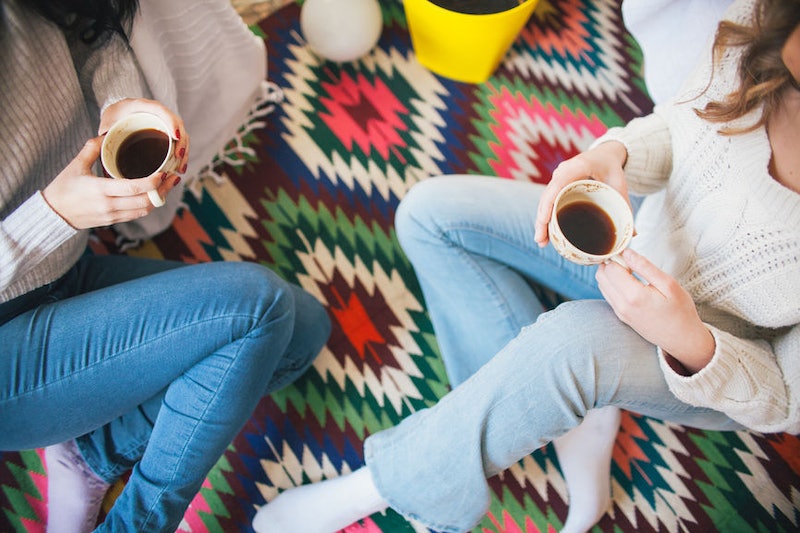 Jennifer Pastiloff really listens to people. That alone is clear even in the way she replies to emails, how she engages with social media. For whatever brief moments it might take to read a few questions or comments and type a reply, she’s with whoever is on the other end of the void. This "radical listening" she practices — as it’s described in her memoir, On Being Human: A Memoir of Waking Up, Living Real, and Listening Hard — is all the more powerful given that Pastiloff is deaf.

"Radical listening is bearing witness. Listening without an agenda or an intention of 'when is it my turn to speak?'" Pastiloff tells Bustle. "For me, it’s a physical act; because of my hearing loss I have to really get in your face to experience it. If you watch me listening to someone you will notice I tune in with my whole body. My ears might fail me but I have learned other ways. Radical listening requires quieting the Inner Asshole because it’s really hard to listen when your IA is being really loud."

"It’s so much easier to walk through this world when you’re focusing on the voices of those who love you," Pastiloff says.

That Inner Asshole Pastiloff describes? Pretty much everyone has got one. Hers is a central figure in On Being Human; it's the entity she fights against that is determined to distract her mind, silence her voice, derail her plans, and critique her every move. It’s the voice that told her to ignore her hearing loss for the first decades of her life, the inner critic who informed the eating disorder she struggled with for years. "When I was sick with anorexia, all it ever said was 'You’re fat and you’re a monster,’ so I could never sit and listen to other people,'" Pastiloff says. "That voice was downing out what was happening around me. Instead of being present I was going through a running list in my mind, shaming myself for whatever I ate that day. My theory is that you don’t kill your IA you just quiet it, hopefully."

In her memoir, Pastiloff describes how hard quieting that Inner Asshole can be. It was one of the great endeavors of her early life. She describes a phenomenon called the "one in 100," wherein you focus on the one person who dislikes you, not the 100 who love you. "It’s so much easier to walk through this world when you’re focusing on the voices of those who love you," Pastiloff says.

"In my workshops we write a letter to ourselves in the voice of someone who loves us," says Pastiloff, who hosts global retreats that are part writing workshop, part yoga retreat, part night out at your favorite karaoke bar, part grief circle, part flash mob dance party, and so much more. "The prompt is: 'If you could see what I see you’d know…' It takes habit to seek out the beautiful things in yourself or in others. Some days we suck at it, but we get better."

'On Being Human' by Jennifer Pastiloff

She asks her attendees to pick someone who loves them, and write to themselves from that person’s point of view — what they see in you that you want to see in yourself; what they love about you that you haven’t yet learned to love in yourself. "What’s amazing about this practice is that it helps people remember who they are. Because it may be your loved one’s voice, but you’re writing it yourself. And it brings out the light, all the wonderful things about who you are — even if you’re feeling so in the dark that it’s hard to find nice things to say about yourself."

"We need to learn how to sit with grief. To hold its hand. To let it be."

Those attendees include women and girls supported by The Aleksander Fund scholarship, created for a woman who attended one of Pastiloff’s retreats after losing her child, a baby boy named Aleksander, at 42 weeks pregnant. Since then, Pastiloff, with the fundraising efforts of her social media community, has brought a dozen women who have lost children to her retreats. A recent attendee was a woman who lost both of her sons in 2017, when a person killed them driving down the interstate. Another woman came with her 13-year-old daughter, whose father had died by suicide and whose 17-year-old brother was just killed in a car crash — a little girl who lost her dad and brother, and a mom who lost her son and husband.

"One might think it sounds like it would be unbearably painful to be on a retreat with so much sadness. It was," Pastiloff says. "But there was so much joy. They plotted a flash mob dance party for me to Rick Astley — it’s easy to plot things around me since I can’t hear! Never Gonna Give You Up by Rick Astley. In a Tuscan Villa. One of the great surprises of my life. There was just so much laughter and joy and silliness and beauty amidst the pain. There always is when these women join the retreats. We need to learn how to sit with grief. To hold its hand. To let it be."

That sitting with grief? That's radical listening. It's the kind of listening Pastiloff doesn't just do for others, but that she's learned to do for herself as well — having lost her own father at a young age, having learned to navigate both her hearing loss and an eating disorder, and practicing the work of distinguishing her own voice from that of her inner-critic.

"All of us, if we pay attention, can listen better," Pastiloff says. "Especially to ourselves."

Pastiloff describes when the mother of The Aleksander Fund’s namesake, Julia Anderson, attended her retreat. Pastiloff had given birth to her own son, just two months before Anderson reached out to her from the hospital, and their sons would have been close in age. “I refused to look away even though as a new mom it was hard to bear witness to someone going through that kind of loss,” Pastiloff says. “Life is hard. I am here for it.”

More like this
Prince Harry Incorrectly Recites Christina Aguilera’s “Genie In A Bottle” Lyrics
By Jake Viswanath
5 Signs You Have A Toxic Relationship With Yourself
By Lexi Inks
'That '90s Show' Star Callie Haverda Got Advice From Mila Kunis & Ashton Kutcher
By Brad Witter
Meghan Trainor & Daryl Sabara Are Expecting Their Second Baby
By Jake Viswanath
Get Even More From Bustle — Sign Up For The Newsletter
From hair trends to relationship advice, our daily newsletter has everything you need to sound like a person who’s on TikTok, even if you aren’t.